Twitter has inked nine new deals with Asia-based entities for premium video sports content that will make use of Twitter’s In-stream Sponsorships feature to monetize highlights and other content for Fox Sports Asia, Eleven Sports, BallBall, and more. Aneesh Madani, Head of Sport Partnerships, Asia Pacific, Twitter, says the key is to enable brands to be where the fans are and that is often watching video clips of key highlights, interviews, and even feature pieces and athlete profiles. Twitter made the announcement at the SVG Singapore OTT Workshop, held on 15 March. 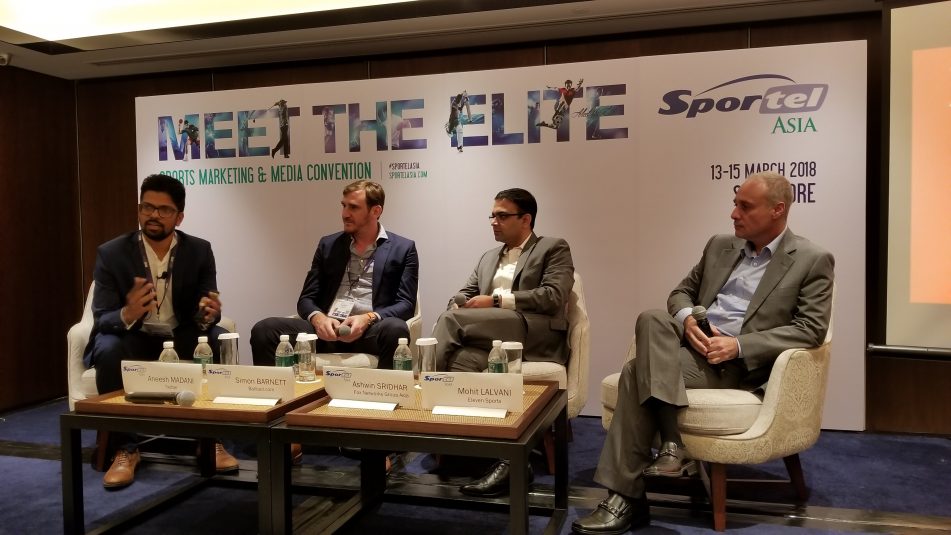 “Fans can be scrolling through their timeline and see a Ballall.com video they want to watch and then there is a six-second pre-roll for a brand before they can watch the highlight,” he explains. “It is seamless, and the brand can choose the clips they want to be in front of so they get to be in front of trusted content while the content owner gets additional distribution of clips and make some new revenue.”

Simon Barnett, BallBall.com, VP, sales director, says it has been difficult to monetize social media content and that Twitter’s program can change that.

“The reality is we get audience and reach but we are not a charity and we need to make money from social media,” he says. “So now we are working with partners who can marry us up with advertisers who will pay what the content is worth and help us commercialize content across multiple platforms.”

Madani says that one of the challenges with social video is marrying quality content and scale as there is a lot of video but much of it is of poor quality. So, the sponsorship program is designed to match up the top content with the top brands.

“We are allies to our partners like the federations, broadcasters, teams, and athletes and we now have a good way to work together and bring the richness of sports to the platform,” he adds.

“The beauty of digital is offering a personalized experience but doing that across 10 or 15 markets in Asia is incredibly difficult,” he says. “You need to get the content right but also the experience.”

Mohit Lalvani, Eleven Sports, director of business development and partnerships in Asia, says that content on Twitter like local football matches has worked well for Elevent Sports. And the use of social influencers instead of anchors is one of the more interesting ways Twitter can be used to build relationships with fans.

Sridhar adds that the live aspect of sports and Twitter’s ability to get key moments of a game out to an audience is the key to creating moments of engagement.

“We have also started using Twitter as a way to provide feedback for original shows we produce and as a way to make shows more engaging as the chatter on social can throw the planned discussion for a show out of whack,” he says. “But it gives a new live element to a traditional TV show.”

Another way Fox Sports Asia has embraced Twitter is through the creation of Fox Sports Ambassadors which are people who are passionate about a sport in a given country like Vietnam or Cambodia.

“We give them a Twitter handle and then they cover the sport for us and have a platform to talk about their favorite sport,” he says. “It’s done incredibly well for us and some of our best content is produced by ambassadors.”

BallBall.com was just acquired by Dugout from News Corp. and is now part of a new entity, Dugout SE Asia, which will be headquartered in Singapore. BallBall.com was launched by News Corp in August 2013 and is now one of the leading football video platforms in South-East Asia as it distributes short-form highlights from European and other top football leagues to the region, generating 800 million video views during the 2017-18 football season.

The agreement to acquire BallBall will see Dugout showcase the mobile and online platform’s unique aggregation of football content in two key territories, Vietnam and Indonesia, through a BallBall section on the Dugout platform, with plans to expand into other countries in the region. From today, the best of Dugout’s content will also be showcased on ballball.com. which will distribute BallBall content in Asian markets along with exclusive off-pitch content supplied by Dugout clubs and players. Dugout represents the first time the world’s biggest clubs have joined forces to create a business, with partners including AC Milan, Arsenal FC, Chelsea FC, FC Barcelona, FC Bayern Munich, Juventus, Liverpool FC, Manchester City FC, Paris Saint-Germain, Real Madrid CF, Inter Milan, Roma, Napoli, Tottenham Hotspur, Atletico Madrid and more.

“We are working with clubs to produce content and we have digital media editors with the clubs that are behind the scenes and creating much richer and deeper stories,” says Barnett. “Our view is we need to get ingrained with the clubs to have compelling content the viewers want to see.”

He says Twitter is used to publish in-the moment content as Ballball has the rights to publish EPL goal clips within five minutes of a goal being scored.

“And we have seen marked improvement in the Indonesia market, where we can show highlights from every competition in the world, to marry up advertisers and content,” he adds.

Lalvani says that Eleven Sports is transitioning to a B-to-B model and only working through partners like Twitter as the cost of acquiring a subscriber through a B-to-C model has proven unsustainable. Twitter will play an important part in getting live content out to fans in a sustainable way and also build relationships with other B-to-B offerings like betting sites.

Adds Sridhar: “A game or match is nothing but a series of moments and with digital we can put those key moments in front of the fans in the right way and at the right time.”

For Astro Malaysia the right time this summer will mean tapping into World Cup excitement.

“The FIFA World Cup is the biggest sporting event on the planet, and this new partnership with Twitter gives us a major opportunity to leverage excitement about the tournament beyond the TV screen,” says CK Lee, VP Sports Content at Astro.  “Alongside our broadcast all 64 matches of the World Cup, Twitter will help amplify the most exciting moments from Astro’s coverage, and immerse fans in the ‘world game’ even further through expert analysis and fun, creative live and highlights video content from Russia.”

And Chatri Sityodtong, chairman and CEO of ONE Championship, says the partnership signifies the two companies’ commitment to developing martial arts in Asia and extends the reach of ONE Championship’s exciting live and digital content.

“We’re excited that martial arts fans, particularly those on the Twitter platform, can now enjoy free ONE Championship bouts while engaging in real-time conversation,” he adds.

The nine deals Twitter have signed are with the following:

Asian Tour (@AsianTourGolf): Fans will have access to clips and highlights coming from major golf events on the Asian Tour.

BallBall (@BallBall_ID): Fans in Indonesia will have access to clips and game highlights coming from the top European football leagues.

Eleven Sports (@ElevenSportsSG): Fans will have access to clips and game highlights coming from Serie A, FA Cup and more in Singapore.

International Table Tennis Federation (@ittfworld): Fans will have the chance to watch highlights of matches and other clips in almost real time from the best tournaments in the world.

NetTV (@netmediatama): Fans in Indonesia will have access to clips and game highlights coming from MotoGP

SportsFix TV (@SportsfixTV): Fans in Malaysia will have access to clips and game highlights coming from Malaysian League, Thai League and Serie A

TV ONE (@tvOneNews): Fans in Indonesia will have access to clips and game highlights coming from Liga Satu, Martial Arts leagues and more.