Since the first renderings of the 360-degree Halo videoboard were released nearly three years ago, Mercedes-Benz Stadium promised to blaze a trail in in-venue video production and technology. Earlier this week, more than 230 attendees – including representatives from 12 NFL teams – traveled to Atlanta for SVG’s annual Sports Venue Production Summit to see the Halo in person, and learn more about the gear and personnel responsible for powering it. 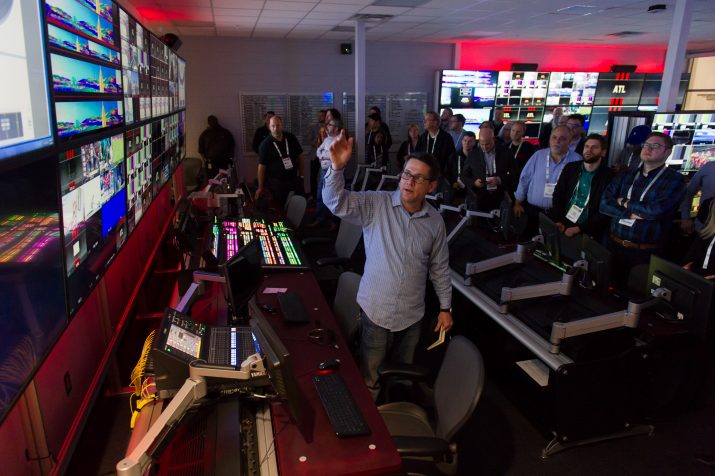 Jason Cothern explains the video-production workflow to a tour group inside the stadium’s video control room.

The two-day event kicked off on Tuesday with a behind-the-scenes tour of Mercedes-Benz Stadium. Attendees were invited inside the 1080p60 video control room, which was integrated by Diversified and houses two Ross Video Acuity switchers, XPression Studio CGs, and Tessera software; an Evertz EXE IP router and DreamCatcher replay servers; ChyronHego graphics systems; and much more. On Wednesday, Mercedes-Benz Stadium Director of Stadium Production Jason Cothern paid tribute to a roster of technological partners that also included Daktronics, Grass Valley, Canon, Riedel, CatDV, Telestream, Panasonic, IBM, and many others.

“I want to thank all those partners that came and worked with us. We would not be here today with out you,” said Cothern, during his team’s opening presentation. “It wasn’t a vendor-client relationship, it was absolutely a collaborative effort and that’s why I call you partners, and not vendors. So I want to thank you.”

Cothern, who joined the Mercedes-Benz Stadium team after five years with the Florida Panthers, laid out three of his biggest lessons learned during the venue construction process. First, he said, learn from your mistakes and bring your knowledge to the table. Second, leave your ego at the door.

“Why not look at what other people are doing?” he said. “Why not try to be as good as them? Why not take an idea, enhance it, and make it your own?” 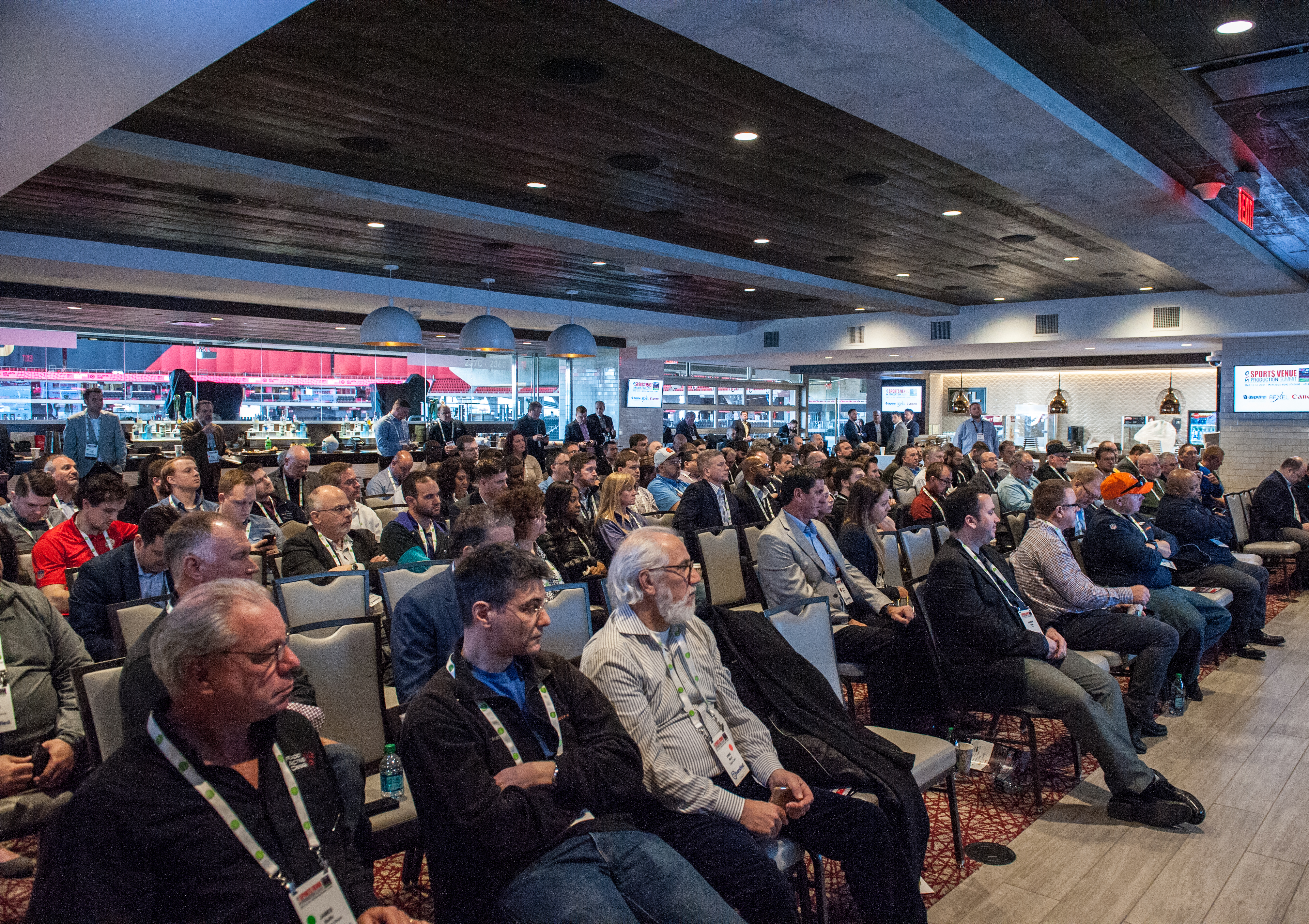 More than 230 attendees traveled to Mercedes-Benz Stadium for the two-day event.

“Surround yourself with a great team, which I absolutely did,” said Cothern. “This has been a big, big thing to launch this building with everything going on. And when I say team, that means differnet things. That means Ross, that means Daktronics, that means Evertz. Develop your team there, and then content-wise, develop a team there. Pete and I come from old-school thinking; we like to do the content ourselves. But [we also had] to be realistic.” Rather than pile content-creation work on their team, Cothern and Soto turned to Digital Kitchen, Lava Studio, The Famous Group, and Game Changer MVP to help shape the Halo’s video presentation. “There’s no way I could have done this without this group,” he said.

Following the presentation, attendees were treated to panel discussions and presentations that ranged from the technical to the creative, and showcased the latest and greatest in sports-venue production and technology from a variety of professional teams, universities, systems integrators, venue consultants, and technology vendors. Throughout the event, the focus remained squarely on enhancing the fan experience.

Stay tuned to sportsvideo.org next week for in-depth reports and audio recordings for every panel discussion, video interviews with panelists, and a photo gallery of the two-day event!