As the NYC Half Marathon snaked its way through Brooklyn and Manhattan for 13.1 miles last weekend, CP Communications had the race covered with an entirely new transmission and communications plan. For the first time, CP deployed 4K bonded cellular and a 4K COFDM Smart Car to cover the race and a full IP communications network on the Smart Car. 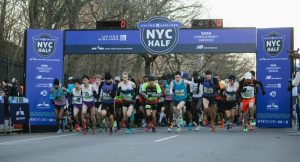 The NYC Half Marathon helped prove the bonded-cellular concept for live coverage of events.

“We built the Smart Car for [last year’s] full marathon [in New York City], and we did traditional bonded-cell and traditional COFDM off the car,” explains CP Communications CEO Kurt Heitmann. “This year, for the half marathon, we changed and went to 4K. We created a partnership with Mobile Viewpoint — they are part of the Triple Group in the Netherlands — and we came up with a 4K solution for both bonded-cellular and traditional COFDM coverage.

“4K moves a lot of data,” he continues, “so you always have to have your backups. We decided to do 4K on the Smart Car because nobody’s done it before, and we wanted to push the limits. And we did.”

“We started with this hybrid model of doing COFDM and bonded cell at the marathon two years ago,” says Heitmann. “We just continue to move away from COFDM because the bonded cell is so good now. 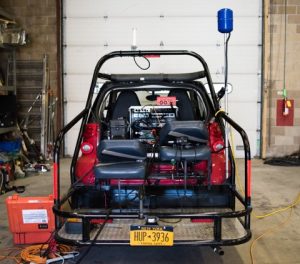 “It’s not just about moving video anymore,” he continues. “It has to be about moving data. And the way [the Agile encoder] moves data, we can prioritize the video over the audio, we can prioritize the communications over the video if we choose. So we’re just prioritizing the way we move our data. I think that’s why they call it Agile; it gives us so many handles and so many technical possibilities.”

“We went from six rooftops last year at the half marathon to two,” says Heitmann. “There’s some [communications] integration that has to be done further, but, for the most part, we were very, very pleased with the result and will continue to use UNITY and LQ in the future and thus eliminate citywide radios and citywide intercoms — again, eliminating another rooftop. IP is the future.”

In addition to the Smart Car, CP deployed two motorcycles for course coverage and two additional motorcycles and scooters to cover the wheelchair race. ABC deployed a helicopter and two ENG setups: one at the start line in Brooklyn and one in the middle of the course. All cameras were streamed via IP. 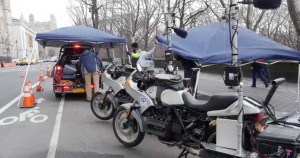 In addition to the Smart Car, CP Communications deployed UNITY cellular communications on motorcycles and scooters.

CP also introduced a Red House Streaming Virtual Press feed, enabling journalists to log into a website and see streams from the various vehicles, the program feed, and audio feeds. Although the half marathon is an important event for runners and race aficionados, the success of the transmission and communications plan will benefit full-marathon coverage in the future.

“But we had belts and suspenders,” he continues. “We had full citywide analog comms if the UNITY failed. We had full citywide comms if the LQ failed. We had COFDM if the bonded failed. We never go into an event without having the belts and suspenders. But the only way to prove a concept is to have a real test case, a live event. We use these proofs of concept to say, we can do this for half of what it would traditionally cost. And so that’s why we keep doing it. Our customers want it, we want it, and the half marathon was a perfect example of working up to a final product.”