With a little over a year to go before the 2019 FIFA Women’s World Cup in France, the National Women’s Soccer League (NWSL) is in perfect position to stoke the fires of soccer mania in the U.S., thanks its continued partnership with Lifetime.

The partnership, which began last season, gives NWSL a weekly TV window every Saturday at 3:30 p.m. ET on Lifetime. This season’s NWSL Game of the Week slate kicked off last Saturday — the North Carolina Courage topped Portland Thorns FC 1-0 — and comprises a total of 23 live match broadcasts: 20 regular-season matches, both playoff semifinal matches, and the NWSL Championship on Sept. 22.

NWSL will operate out of NEP’s Black & Red and SS23 this season.

“The commitment that Lifetime made to this series was really exceptional,” says Michael Cohen, a soccer-production veteran who serves as executive producer for the Lifetime broadcasts and consultant on the digital-media productions. “They gave us a 2.5-hour window, and it allowed us ample time for a quality pregame show, which included a high-end opening as the chance to really set up the match, the league, [and] our players. We spent a lot of time and energy on the star-building process to make sure that these names get out there and these players are known. We want people to hear about them; they’re all just incredible.”

This year, NWSL will roll out NEP’s Black & Red for the first two matches and SS23 for the remainder of the season, along with a 17-person traveling crew. The NWSL Game of the Week productions will rely on 12 cameras — including the addition of a super-slo-mo — and 10 channels of replay. All matches that air on Lifetime’s linear network will be available for live and on-demand streaming on its iOS and Android apps as well as online at mylifetime.com.

“We looked really hard at all the things that we did [in Year 1],” says Cohen. “We pretty much brought everybody back from our crew; it’s such a hard-working crew, dedicated to this from above the line and below the line. That, to me, is going to be a big difference-maker [in Year 2]. We’re not learning it from scratch: we’re all coming in with this continuity from Year 1 to Year 2.” 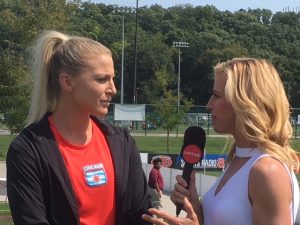 With the addition of Utah Royals FC this year (for a total of nine teams), NWSL has taken the opportunity to revisit its graphics and animation with Toronto-based graphics house Big Studios. Analyst Aly Wagner, who joins play-by-play announcer Jenn Hildreth and pregame host and sideline reporter Dalen Cuff for the second season, will have access to a telestrator for all NWSL Game of the Week matches.

Outside of the 23 live game windows on Lifetime, NWSL continues its partnership with Verizon’s Go90 platform for the remaining 88 matches on the schedule. Those matches will be produced using an at-home approach through Vista Worldlink.

“Last year was a success; we’re looking to play off of last year’s model and just do it again this year,” says Cohen. “I can’t overemphasize the commitment from Lifetime, as well as what a pleasure it is to work with the National Women’s Soccer League, who are totally committed in this partnership. You feel the excitement when we come in on the Lifetime shows. It’s such a great exposure opportunity for the league, so it’s really worked out great.”