ESPN opens the season with a new announce team in its Sunday Night Baseball booth, as Alex Rodriguez and Matt Vasgersian join returning analyst Jessica Mendoza on the network’s marquee MLB property. However, they won’t be the only additions to ESPN’s MLB coverage this year: fans will see a wholly redesigned graphics package. In addition, a trio of technology stars from last season — Front Row Cam, K-Zone 3D, and the GREMI (graphics–remote-integration) model — will see their roles expanded in the network’s MLB coverage this season. 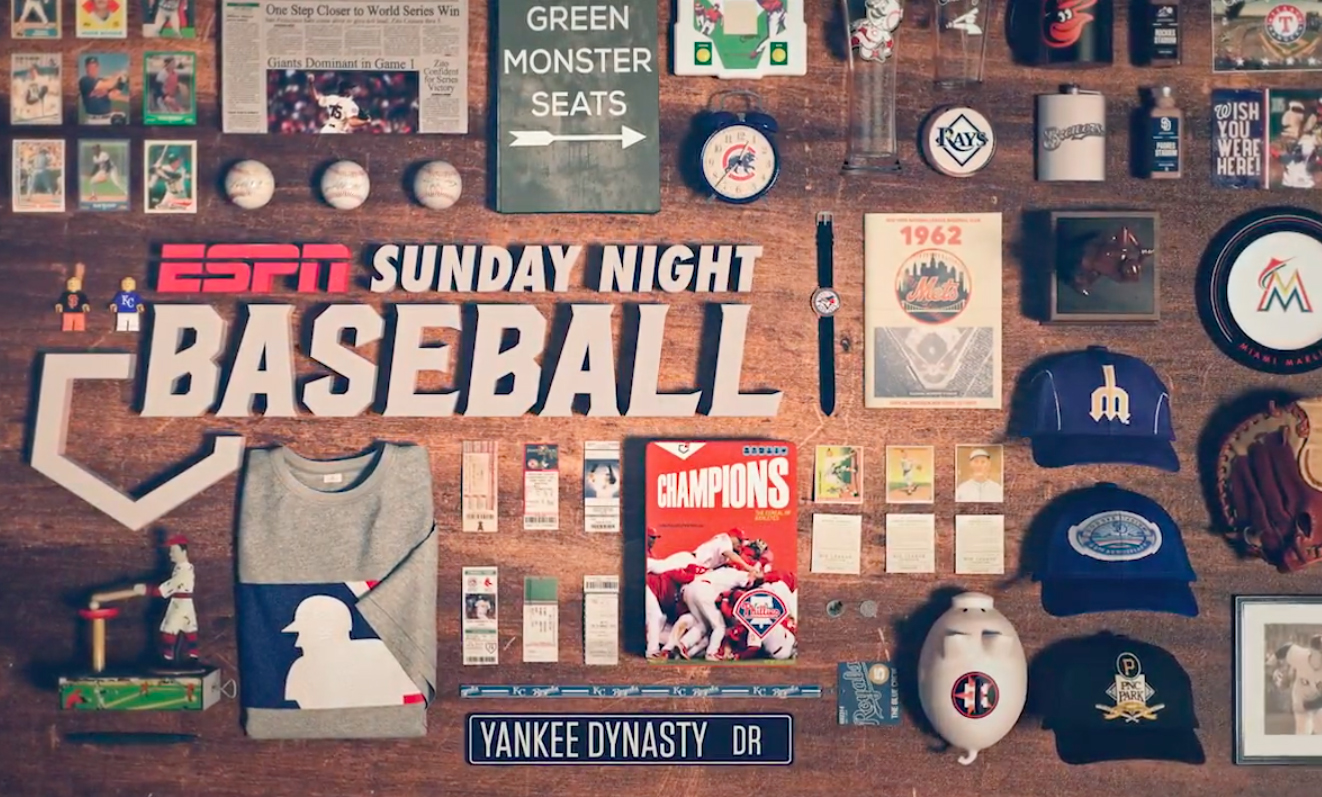 ESPN has revamped its overall look and graphics package for the 2018 MLB Season.

“We’re excited to get going on the season and are very proud to [launch] the new Sunday Night Baseball booth,” says Phil Orlins, ESPN’s senior coordinating producer for MLB. “I’m also very bullish on our new graphics [package], both the aesthetic aspect of it and the functionality of it. We feel that it offers a contemporary look but still has strong flavors of baseball’s lore and tradition, while also giving us more flexibility and keeping the fan [informed].”

Inside the ESPN’s MLB Graphics Package: A New Look and a New Scorebug

ESPN’s new scorebug is now in the upper left corner and incorporates both teams’ records (beginning on April 8), freeing more space at the bottom of the screen for full-slab graphics, according to Orlins. 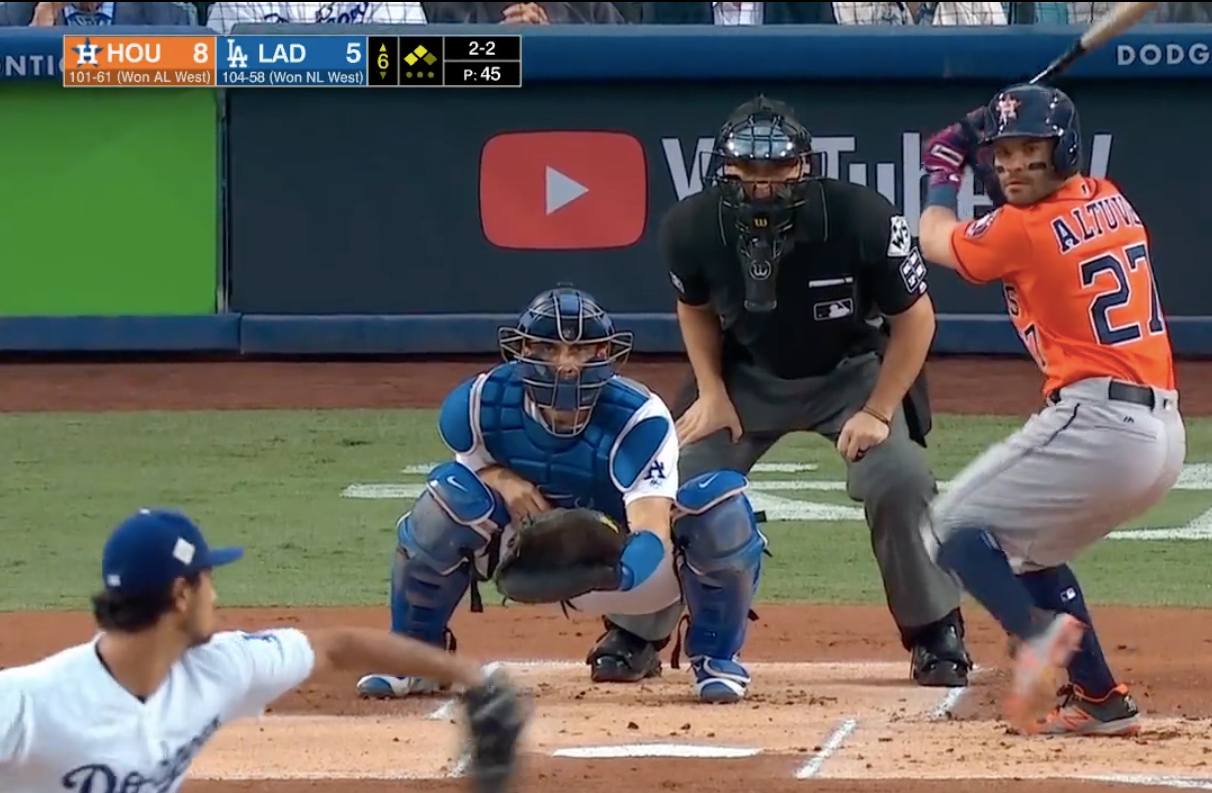 ESPN has revamped its scorebug and relocated it to the upper left corner on its MLB coverage.

“From a content standpoint, this is the first time in a long time I’ve been able to have influence on the geometric layout and where we put graphics. That played a big role in how it was designed,” he says. “The look is designed to be very simple, opaque, and bold, but, at the same time, there’s some really intriguing aspects of player posters and history and things that are individually customized for every market.”

Orlins also stresses the need for the new graphics package to accommodate the “two-box” split-screen approach ESPN has begun using more often (for example, showing a player round the bases after a home run in one window while showing reactions in the second).

“Having like a band across the top with all the [scorebug] info is really conducive to being able to do large two-boxes,” he explains. “In the old look, we always had this mini board that was in the lower right corner, and it was never really [conducive] to the two-box [format]. But now it all lays out perfectly.”

After debuting midway through last season, ESPN’s Front Row Cam became one of the production stars of Sunday Night Baseball, perfectly capturing tight shots of the pitcher’s face looking in at the hitter and super-slo-mo shots of the pitches. The robotic camera brings back the beloved low-home camera angle that had gradually disappeared over the past two decades in favor of additional ballpark seating. 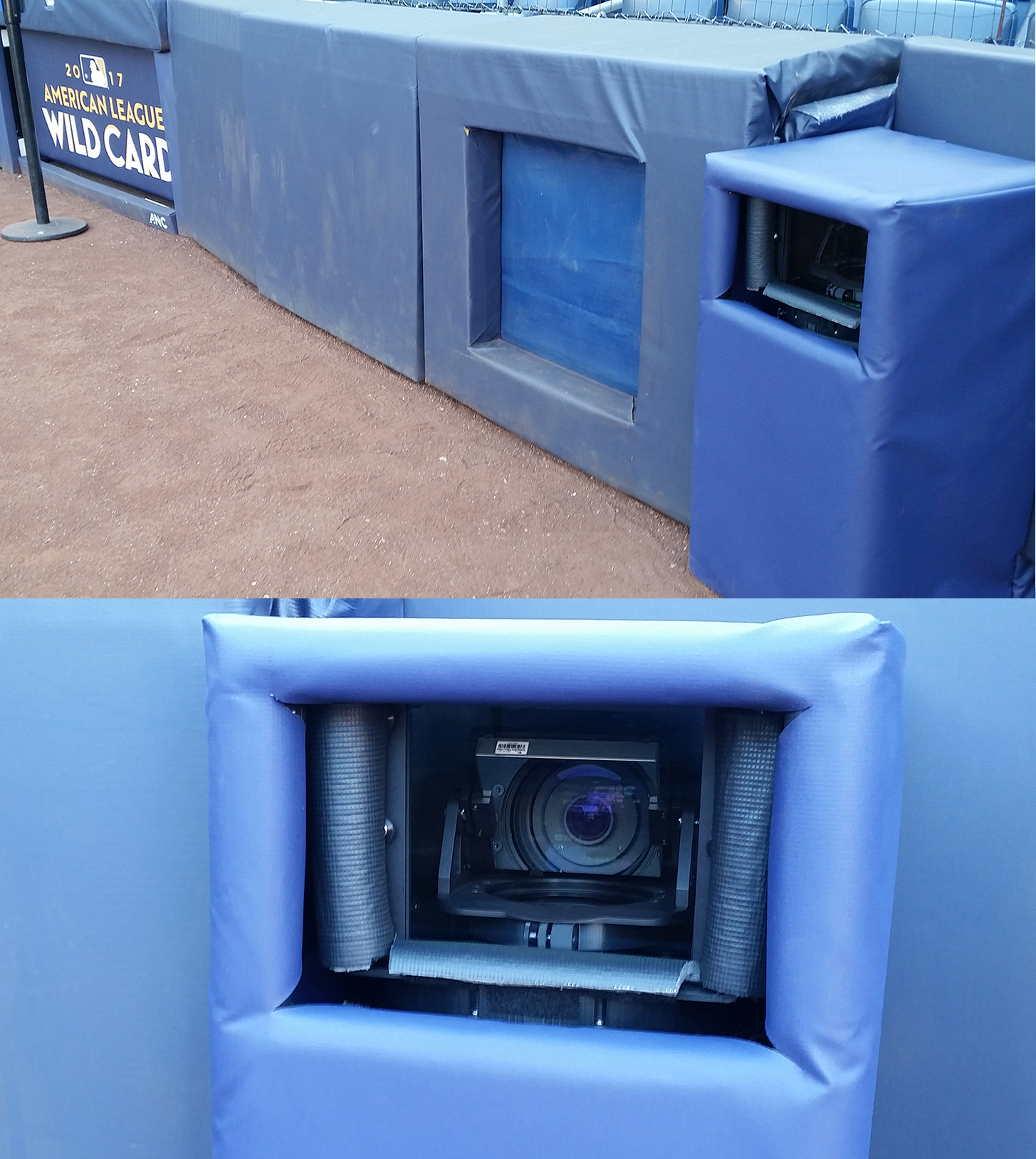 Developed in conjunction with VER, the Front Row Cam system features a Sony HDC-P43 (outfitted with a Fujinon 42×13.5 lens) inside a small cylinder aimed skyward and shooting off a mirror. The camera chain comprises a Sony BPU-4000 baseband processor unit (with high-frame-rate license), HDCU-2500 CCU, and, inside the truck, RCP1500 remote-control panel. The 6X slo-mo replays are handled by an EVS XT3 replay server. The entire system runs on two fibers into a Sony HKCU-SM100 CCU extension adaptor and also features a VER pan-and-tilt controller for the robo operator and a VER 3D-printed housing.

“There were a couple different incarnations out of the gate, and we’ve worked with VER to continue to refine it,” says ESPN Remote Operations Manager Paul Horrell. “By the end of last season, I think that was pretty much refined into what we want it to be. So it should be strong right out of the gate this year.”

Front Row Cam has been used on half a dozen SNB games last season and on ESPN’s Wild Card Game, Orlins expects to have it on the majority of ESPN’s SNB telecasts this season.

“It’s definitely less of a science project at this point,” he notes. “Since we’ve used it several times now, it’s become easier to get [team] permission. Some ballparks, especially older ballparks, have really low front-row walls, so they’re a little bit tricky. But I’m very optimistic that we’ll have two-thirds to three-quarters of our [SNB] games this year. I think we are definitely getting better with it, and we will continue to tweak the [system], too.”

K-Zone 3D Added Across All Games
Having launched on ESPN’s Wild Card Game last year, K-Zone 3D will become a standard element across all MLB telecasts this season. 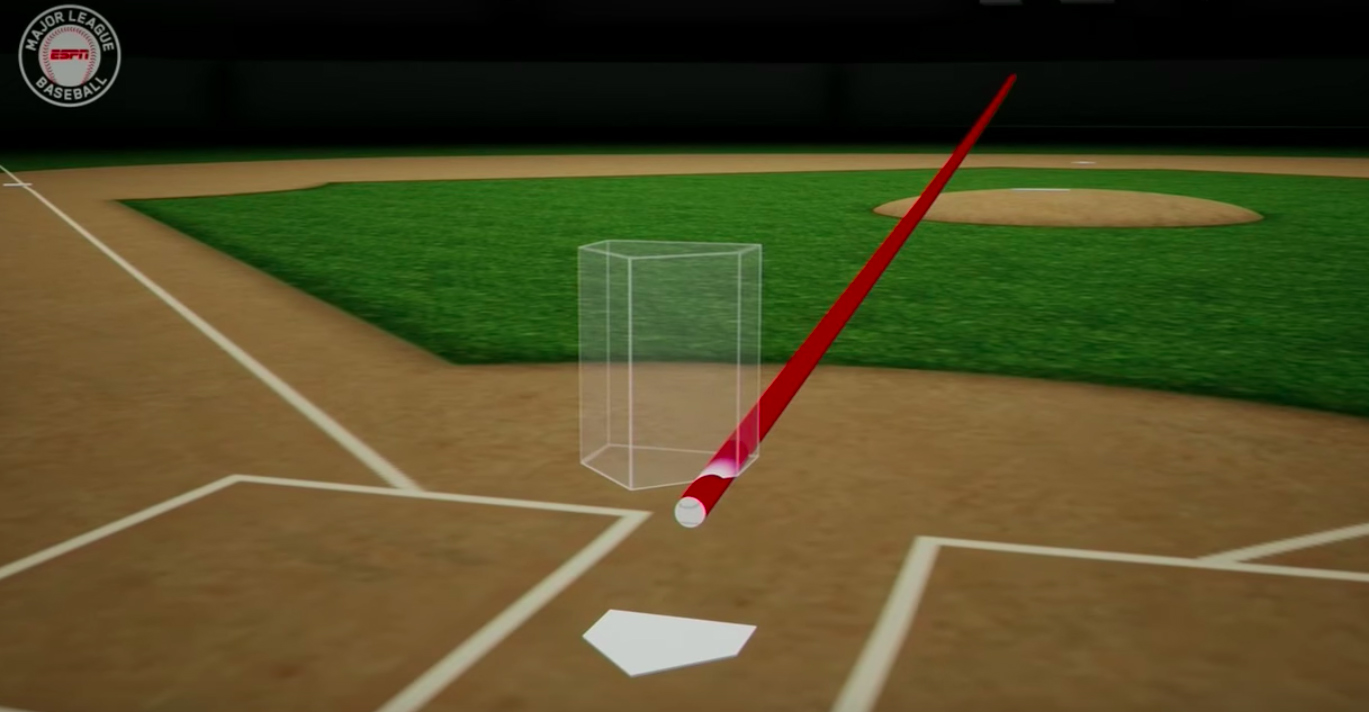 ESPN’s K-Zone 3D is back this season on its MLB coverage after debuting at the Wild Card Game last year (2017 graphic shown here).

“It’s a really great tool that shows you some deeper looks around pitch movement,” says Orlins. “We’re definitely ambitious about it and see huge growth potential. I think we’re just scratching the surface of what can be accomplished in the virtual environment with the data that Statcast is collecting. It’s just a matter of putting all the pieces together and how to display it, and this is what I view as the first of a number of steps that will be extremely important. Being able to visually demonstrate that in a 3D environment with a camera that can move around, I think, is going be very important over time. Whether or not we get there tomorrow is another thing.”

ESPN Goes Full GREMI Across All MLB Games
One of the primary factors that enabled ESPN to launch K-Zone 3D across all its MLB properties was its growing use of the GREMI production model. The at-home–production workflow uses graphics and replay equipment on the truck but allows operators to be located at the broadcast center in Bristol, CT. 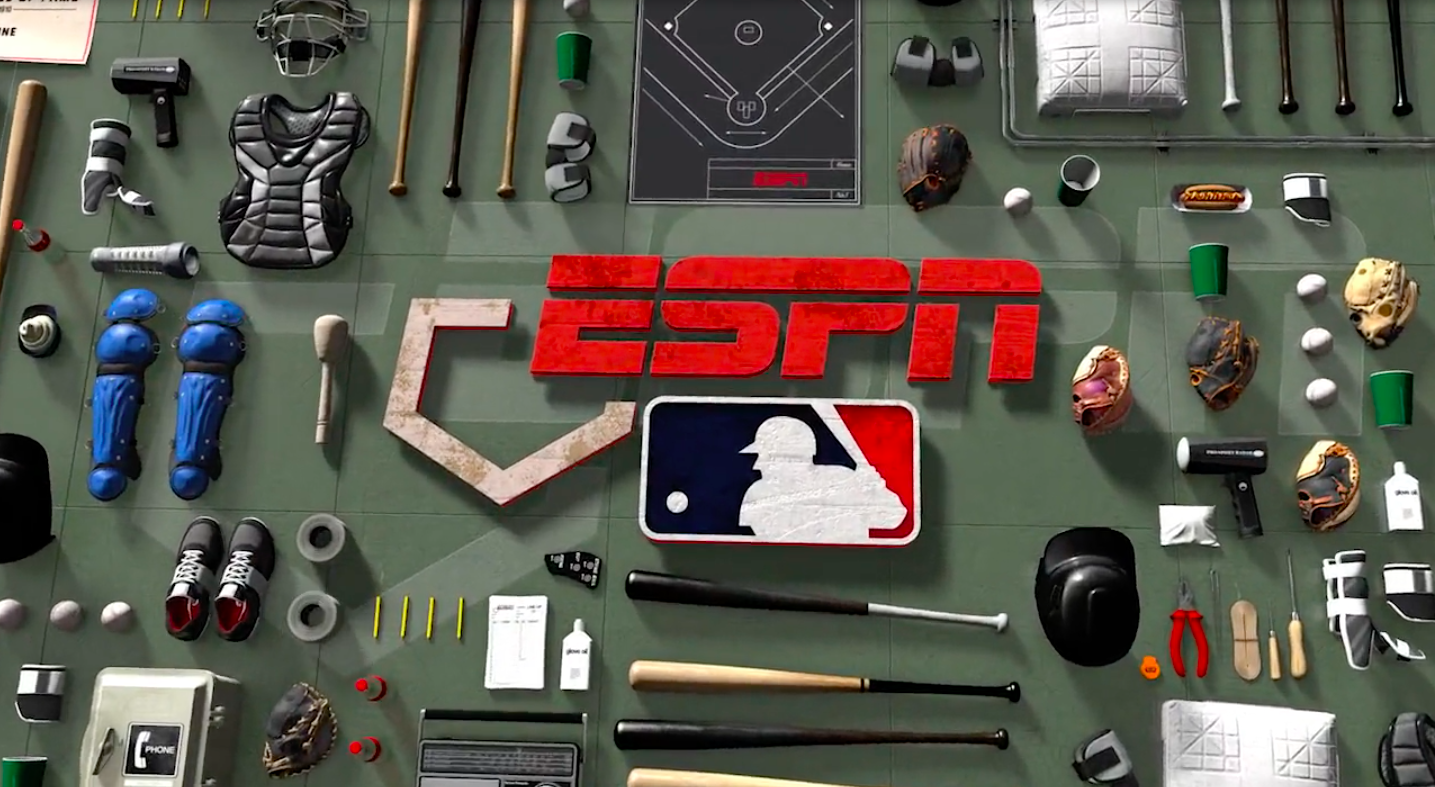 “It used to be that, when we had something new like [K-Zone 3D], we needed a couple people working on it to travel to every game, and that wasn’t always affordable,” says Orlins. “That’s one of the great things about the GREMI model: we basically just set up a computer in each truck and build it into a GREMI workflow out of Bristol, and we get to have it on every single game.”

This year, for nearly all of ESPN’s MLB Games, operators for Vizrt graphics, the scorebug, ART live/replay systems, K-Zone EVS replay, and from one to three EVS ROs will located in Bristol.

After completing a proof-of-concept in 2016, ESPN began using GREMI on weekday MLB games last year and expanded the model to its NBA coverage this season. Now ESPN will be in GREMI mode across all its MLB properties, including Sunday Night Baseball. ESPN recently completed a facilities expansion in Bristol for added GREMI capacity.

“It’s a great model because it takes advantage of all the available equipment on the trucks and the operators back in Bristol,” says Horrell. “It integrates seamlessly, and there’s very little delay since everything is fed via fiber. It allows us to avoid having to travel people, and we can also put our [best] operators on more shows.”

10 Games Out of the Gate With Puerto Rico and Mexico on the Horizon
ESPN is once again opening the season with a stacked slate of games: 10 total over six days, including 13 consecutive hours of Opening Day coverage today. And that’s only the beginning: ESPN will also be making stops in San Juan, PR, on April 18 in April and Monterrey, Mexico, on May 6, as part of an ultra-packed schedule this season.

“Last year, we introduced buried effects mics in the dirt around the batter’s box and the pitcher’s mound and several areas in the infield,” says Horrell. “You definitely hear the difference. That is deployed with team approval on a game-by-game basis, but we’re hoping to get six to eight of the effects mics on a pretty regular basis.”