Other highlights include AR in Atlanta, new robotic cameras in St. Louis, and a new studio in Cincinnati

With a wholly revamped graphics package and increased use of MLBAM’s Statcast and Pitchcast systems, Fox Sports’ regional networks are poised to offer fans a whole new look this baseball season. In addition, Fox is adding augmented reality in Atlanta, box robos behind home plate in St. Louis, a new studio in Cincinnati, and a new IP transmission network connecting all 22 of its RSNs. In total, Fox RSNs will produce more than 2,250 MLB games this season, and more of these telecasts than ever will be picked up by FS1 as national broadcasts. 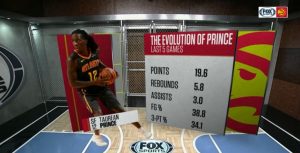 Fox Sports South/Southeast integrated AR into its studio operation in December and has used it on its NBA coverage already.

“I think last year was our best year ever in covering baseball, and we’re looking to build on that this year,” says Mike Connelly, SVP/executive producer, Fox Sports Networks. “It’s always been our goal to build these RSN broadcasts into something special, because we’re in our home buildings 81 times a season. The philosophy is to create this great home-broadcast experience, and then our visitor shows can just feed off of that. We’ve gotten to the point now where you have these very big productions that truly look like a network show and feel right at home on FS1.”

During the MLB Postseason and World Series last fall, Fox Sports debuted an MLB graphics package built natively for Vizrt graphics systems (which Fox migrated to prior to the 2017 season). This season, Fox is rolling out this Vizrt-centric look across all its RSNs.

“It’s a really slick new look, especially the new animations package,” says Connelly. “Last year, we switched over to Vizrt [graphics systems] in all of our trucks and studios, and this is the evolution of that [migration]. This graphics package was built specifically for Viz rather than being converted. You’ll see a lot of movement now and video-generated graphics coming out of the Viz. That’s going to be the biggest upgrade to the look of our broadcasts.”

As Statcast Arrives for RSNs, It’s All About Personalization

All Fox RSNs will also have access to MLBAM’s Statcast player-tracking and analysis system this year, with at least one Statcast element integrated into every MLB broadcast. Although Statcast has become standard on all national MLB broadcasts, Connelly sees it as an even more valuable tool for RSNs, which cover a single team throughout the season.

“[Statcast] has been around for quite a few years now, but we want to make sure that our [announcers] can explain it and customize it for their team, because the worst thing we could do is show a brilliant stat that has no real context to the team,” he explains. “We want our [RSNs] to build their data specifically to their team. [For example], the Yankees are going be a power-hitting team this year, so [YES Network] is going to focus on home runs and exit velocity off the bat. Another team may focus on spin rate for pitching. We really want them to build their data according to their team.”

In addition, Fox is moving its Pitchcast virtual–strike-zone graphic over the plate this year, as it did for national postseason broadcasts last year.

Statcast and Pitchcast systems, along with an operator for each, will be located inside the home RSN’s truck in most cities.

“Technically, it’s been a big undertaking,” notes Connelly. “Not just installing the equipment but finding room for two more operators inside a truck is never easy.”

Fox Sports South, Southeast Hop Aboard the AR Bandwagon
This year, Fox Sports South and Fox Sports Southeast will become the first Fox RSNs to deploy augmented reality for MLB coverage, having integrated the technology into their studio in December. The technology will be used within the network’s studio and primarily as part of pre/postgame coverage to provide a dynamic look at statistical graphics and game information.

“[AR] will primarily serve as a new way of presenting graphic information,” says Randy Stephens, executive producer, Fox Sports South and Fox Sports Southeast. “AR is large and impactful, which creates a wow factor but also adds a degree of emphasis to statistical storylines. As we become more advanced with our use of AR, we will be able to create environments that our studio talent can interact with to both enhance demonstrations and provide new forms of sponsorship integration.”

The AR graphics are created through the Vizrt graphics system, which is integrated with a Mo-Sys Star Tracker camera-tracking system. The workflow requires a combined effort of the main Fox Sports graphic-design team in Charlotte, NC, and Fox Sports South/Southeast operators in Atlanta. The designers create the elements, and the operators are responsible for positioning and sizing them.

“Turnaround time depends on the complexity of the element,” notes Stephens. “For example, 3D images take longer than 2D images. Player-cutout graphics take some time to prepare, but, once they exist, they can be inserted into multiple elements instantly. In addition, text information can be updated like other on-screen graphics.”

These AR elements will join Fox Sports South/Southeast’s Vizrt touchscreen and new robotic-camera system at SunTrust Park to “provide impactful information and analysis to the viewer,” he adds.

Additions for Midwest and Ohio: Box Robos at Busch, New Studio for the Reds
Other major additions at Fox RSNs this baseball season include two box robotic cameras behind home plate at Busch Stadium for Fox Sports Midwest.

Fox Sports South/Southeast will be the first Fox Sports RSN to use AR on its MLB coverage.

“We will have two robos in boxes — one for left handed batters and one for right handed batters behind the plate — which will give us a great look at both,” says Connelly. “This is new for us, and it will serve as a test to see how it looks. If it goes well, we’ll start looking at adding it elsewhere.”

In addition, Fox Sports Ohio has launched a brand-new studio for its Cincinnati Reds coverage.

“The new studio for the Reds looks amazing and fits into the format of our new design that we started in Atlanta last year,” says Connelly. “We’re excited about it and plan to continue to expand that in the future.”

Also of note, Fox Sports West produced all 31 Los Angeles spring-training games this month using the at-home production model (or “home-run” production, as Fox dubs it). The RSN sent all camera feeds from Tempe Diablo Stadium in Arizona to its primary control room in downtown Los Angeles, where the telecasts were integrated.

“Our home-run broadcasts would really just be the smaller events, mainly college and high school, but I don’t think it will go past that,” Connelly observes. “It’s absolutely perfect for spring training, though, because not all ballparks are equipped with the [necessary TV-production facilities].”

ENCO Automation, IP Network Further Unify Fox RSNs Under One Roof
Over the past couple of years, Fox has installed ENCO touchscreen control surfaces and playout systems in every RSN truck, streamlining its music-playback workflow and providing each network with access to Fox’s full library of licensing music.

“It’s odd to think about, but music playback in the trucks hasn’t changed in 25 years,” says Connelly. “The new ENCO [system] collects metadata and organizes everything and gives you exact cues for music playback in real time. We’ve never been able to do that before, so this is a big burden off the production teams. These units will synchronize through our server in L.A., and they can automatically upload and sync music that’s licensed, so our [RSNs] have a library of over a million cuts that they can choose from.”

Further tying all 22 Fox Sports RSNs together is a new Level 3 IP transmission network connected to every team’s ballpark. Two redundant 1-GBps transmission lines are installed at each venue: the primary is connected to Fox Sports’ master control in The Woodlands, TX; the second, to the respective RSN’s broadcast center.

“[Each RSN] can now do seamless studio integration because they’re tied into the truck 100% of the time,” says Connelly. “That is going to make things much easier. If they really wanted to — and we’ll see how far this goes — they can tie into any RSN: if our Twins guys wanted to interview guys on the Angels broadcast, they could easily tie into the Angels truck without a problem. Our goal is, we’re working towards interconnecting all of our remote trucks.”