Airing on DirecTV, each will feature seven cameras and a single 4K feed from a single truck

After producing two games of the ALCS and multiple regular-season A-level games in 4K last year, Fox Sports is back aboard the UHD train with three 4K MLB productions planned this season. Fox’s 4K baseball slate, which will air on DirecTV, begins tomorrow when the Astros visit the Rangers at Globe Life Park in Arlington, TX, followed by A’s-Blue Jays in Toronto on May 19 and Yankees-Red Sox in Boston on Aug. 4.

Although 4K baseball is nothing new for the Fox Sports operations team at this point, this year’s trio of productions will be unique in that all three games are C-level games as opposed to postseason or A games. That means Fox will be the third broadcaster pulling into the venue after both teams’ RSNs, forcing the national broadcaster to work with limited existing cabling and resources. 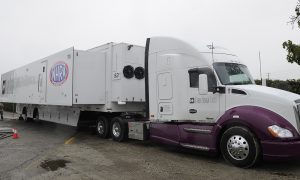 “Because we’re the third [broadcaster] in, we’re doing almost everything on our own,” says Francisco Contreras, director, field operations, Fox Sports. “Cabling is probably the hardest thing because there’s not a lot available anyway when you’re doing a three-way [production]. And 4K requires a lot more fiber, so we’re actually going to have to start running cable at the venue on Friday even though we can’t park the truck until Saturday.”

All three 4K productions will feature seven cameras and produce both the 4K feed for DirecTV and 720p feed for FS1 out of a single truck — producing a single 4K feed and then downconverting it for the HD feed. This weekend, Game Creek’s Nitro mobile unit will serve as Fox Sports’ home in Arlington; Mobile TV Group’s 39FLEX truck will be on hand in Toronto and Boston later this season.

This is very different from [4K shows] last year because we’re treating this like a C game, where we have seven cameras and seven EVS [channels], so it’s not as big as our A games in primetime,” says Contreras. “Last year, when did 4K, it was on Game of the Week shows, so it wasn’t a side-by-side [with the RSNs’] show, which made it easier. This is a much tougher show, but we’re really excited about it, and it should be fun.”

Fox also has plans to produce multiple MLB Postseason games in 4K, the games to be determined.

As for its HD schedule of games, Fox Sports continues to rely more and more on its army of RSNs to produce games that will air on FS1 this season.

“We have a similar setup to last year; FS1 is just picking up more RSN productions this year,” says Contreras. “We’re very proud of how we’ve all been able to work together to create high-quality productions for both the national and regional shows. The main goal for us [on a national level] is to get the season started and get ready for the All-Star Game in July.”