JVC Professional Video, a division of JVCKENWOOD USA Corporation, announced Televisa has purchased 25 JVC ProHD Wireless Bridge bonded video-over-IP units to transmit live ENG field reports from 21 different markets throughout Mexico. The first unit was tested last year at XEFB in Monterrey and now there are three wireless bridge units at XEFB and three at XHG in Guadalajara, with the rest assigned to 19 other Televisa Regional stations. 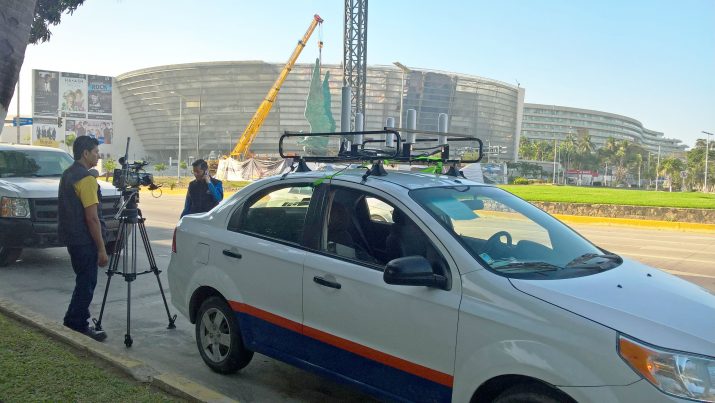 “Before this, it was very complicated to produce a live report because we needed a microwave truck – and it cost a lot of money and required a lot of resources,” Galaviz says. “Now they can report from anywhere using one of our fleet vehicles.”

Previously, Televisa had used its JVC GY-HM850 ProHD cameras to send files via FTP, but the Bridge investment has allowed its news stations to provide more live reports for their viewers.

“We think that we don’t need to buy microwave trucks anymore,” Galaviz says. “Although we depend on the bandwidth and service of the 4G providers, we think this is the best solution for the moment.”

Compatible with JVC’s ProHD and 4KCAM streaming camera models, the ProHD Wireless Bridge is ideal for broadcasts that require high reliability and camera mobility. Each camera in the system is equipped with a transceiver module, which plugs directly into the camera’s USB connector and operates up to 2,000 feet from the vehicle-mounted base station. The cellular uplink with high-gain antenna turns the vehicle into a remote broadcasting hub, receiving signals from one or more field cameras and creating a virtual private network (VPN) for secure transmission.

Broadcasters like Televisa can equip all their fleet vehicles with ProHD Wireless Bridge systems and direct them to a single IP address. While the stations in Guadalajara, Monterrey, and Tijuana have their own IP routers, the other 18 stations use a cloud-based Peplink FusionHub virtual appliance to connect their cameras to a Zixi cloud-based server, which routes live footage to a JVC BR-DE800 ProHD decoder at each station.

The Wireless Bridge units were installed primarily for local news, but Galaviz said they could be used for commercial projects as well as Univision content for U.S. audiences as well. Televisa is already planning to invest in more ProHD Bridge units.

Beyond the Wireless Bridge, JVC offers the Dockable Bridge that connects directly to 800 Series cameras and the handheld Portable Bridge, which is powered by AC or attached Anton/Bauer battery. Unlike other bonded solutions, ProHD Bridge products allow live streaming from multiple cameras to HD-SDI decoders or servers at a central location, as well as CDNs like JVCVIDEOCLOUD and Facebook Live. JVC will demonstrate its entire line of ProHD Bridge products at NAB 2018.