Game Creek has made a big splash on its first appearance at this event, with five mobile units in the compound at the Alamodome in San Antonio. Most notably, the recently launched 79 is here after getting a few events under its belt, including the first two weekends of the NCAA Tournament in Nashville and Omaha. 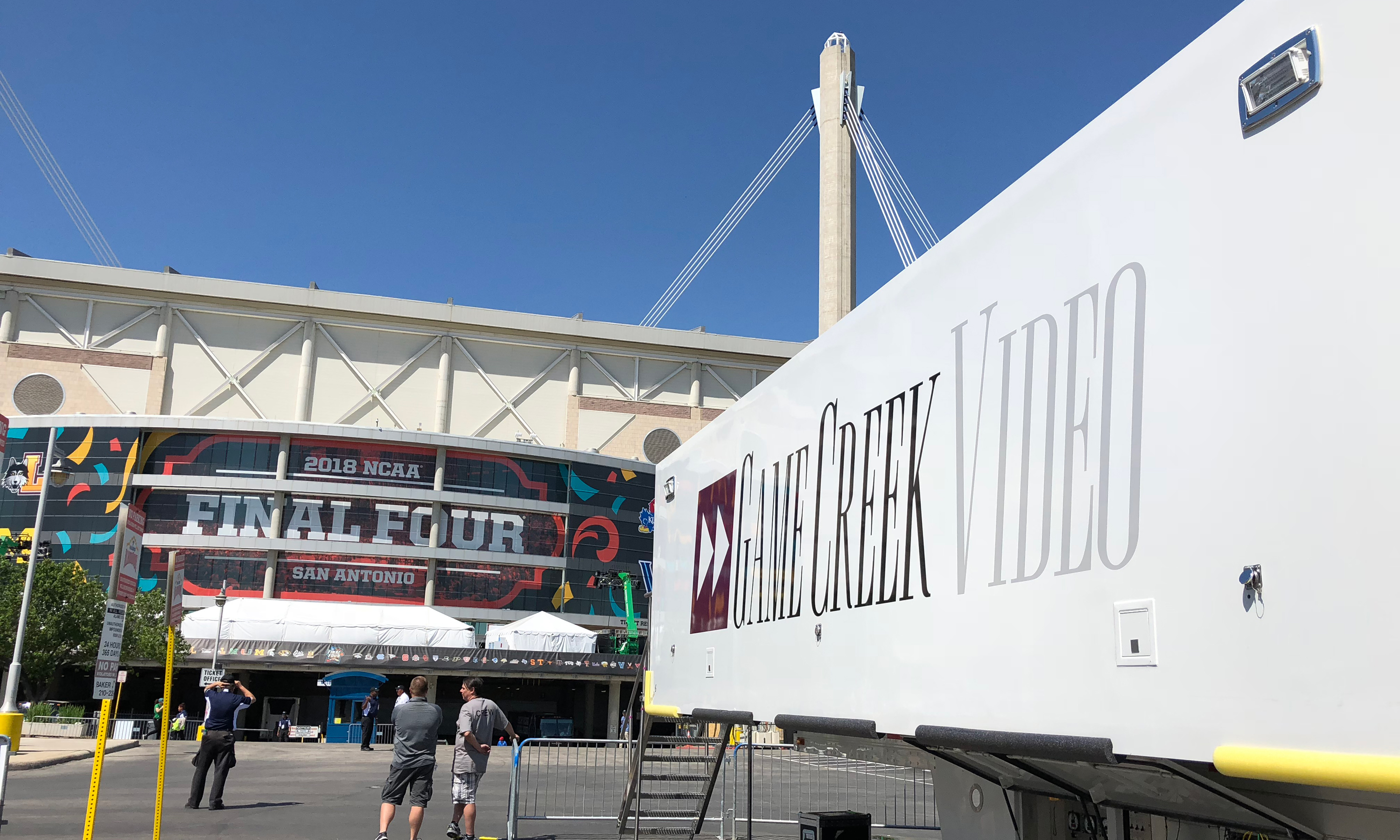 Game Creek Video mobile production units are supporting the broadcast of the Final Four for the first time in the company’s 25-year history.

Built for ESPN, 79 is Game Creek Video’s most souped-up IP-based production unit  ever. The 53-ft. expando features an A and a B unit. Here, the A unit is hosting engineering, video, production, and audio, and the B unit has replay, comms, a V/O booth, and 4K support resources.

“[Game Creek] pushes the envelope in truck technology,” says Chris Brown, director, technical operations, Turner Sports. “Basically, what we are able to do with that truck is [to put] what has historically taken four or five trucks on the game side into three trailers. From that standpoint, it’s a great efficiency of space.”

The dark-horse darling of the compound this year, however, is the brand-new Edit 4, a 53-ft. expando providing space for up to nine spacious edit suites.

Built with the Final Four in mind, Edit 4 is used to cut postproduced content: from teases to transitions, features, and more. Turner Sports works with Los Angeles-based Thumb War Productions to help manage its complex editing infrastructures, and the company played a key role, working with both Turner and Game Creek to get the suites in Edit 4 humming.

“It was an awesome conversation between the folks at Turner and Game Creek when we were trying to fill a gap,” says Brown. “Prior to having a facility like that, we essentially had edit suites squirreled away in every corner of every trailer we could find. That all goes away when you can fit eight edit bays in one truck.”

The unit has been wildly popular with editors because it is highly customizable, with retractable sliding walls that allow collaborative work or secluded focus.

“That’s key because every editor has their own way that they like to work,” Brown explains. “Some don’t mind the community environment; others, depending on what they are working on, want to be able to close themselves off so that they can concentrate. Our editors love it.

“The guys at Game Creek really thought of all of the little nuances,” he continues. “For example, even just the rack depth is extra long. It’s been thought-out, all the different things we’d want in there. It’s a really well-built truck.”

Rounding out the Game Creek contingent here are Pride A, housing ESPN’s  international production, and Pride B, where Turner and CBS are housing graphics for the main game telecast on TBS.