For the second time in three years, Villanova is back in the Final Four. Since a memorable championship run in 2016, the Wildcats’ in-house video efforts have evolved dramatically (and will do so even more this summer when their first centralized control room opens) making this year quite different from two years ago.

According to the old saying, “there’s no substitute for experience,” and Villanova’s external-relations team likely agrees: the behind-the-scenes of this year’s video and marketing plan is far more complete this time around.

“We’re definitely more prepared [this time],” says Ryan Christiansen, multimedia and production coordinator, Villanova Athletics. “We were kind of flying blind during our first championship. The video-production world has changed a lot in two years, especially in social media. We’re adding graphics, animations, and GIFs. There’s going live. Our workflow is definitely more seamless this time around. Everyone knows their role.” 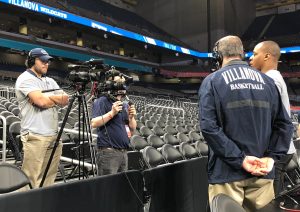 Villanova’s Ryan Christiansen (far left) and Wipe Out Productions’ Curtis Albucher (with camera on shoulder) shoot a live stream being delivered to YouTube, Facebook, and Twitter from the Alamodome in San Antonio.

The cornerstone of Villanova’s Final Four coverage is its live shows. The school has partnered with South Jersey-based Wipe Out Productions. Executive Producer Scott Graham and videographer Curtis Albucher are supporting Christiansen in creation of live content.

Live shows are sent to multiple destinations — YouTube, Facebook, Twitter — via technology provided by Switchboard, an Atlanta-based company whose founder/CEO Rudy Ellis is a Philly native. The product helps Christiansen split the streams to accommodate the added platforms. Villanova is also using WireCase as its encoder.

Naturally, rights restrictions limit where and when the team can shoot footage and the game highlights that can be shared. Albucher will be positioned on the court, shooting game action for features, hype videos, and other elements for postgame use. Christiansen, meanwhile, will roam the arena looking to capture the fan environment.

All shows and footage captured by the Villanova crew are being shot with a JVC HM-660 and a Sony FS7. Assistant AD, Marketing, Jacob Whitten is assisting with the posting of content to the program’s various social-media outlets. He’s also going live from a phone to Periscope to push out interesting behind-the-scenes moments.

“You really have to bank on telling the story of the atmosphere,” says Christiansen. “It’s got to be more than the game for us. You have to get creative.”

When it comes down to it, he adds, regardless of experience, video and digital teams still need to be able to roll with the punches in this environment.

“I think, with how crazy the postseason can be, you can never be fully prepared,” Christiansen says. “I think the best departments are able to perform on the fly and improvise. That’s what we have to do sometimes.”