Some sports events are simply ripe for deep access. Consider this week’s NCAA Men’s Frozen Four, taking place Thursday and Saturday night at the Xcel Energy Center in Saint Paul, MN, near the top of that list.

ESPN is rolling out an impressive arsenal of cameras to bring unparalleled access to both the action on the ice and everything that surrounds this ice hockey championship. The most notable feature of this year’s coverage is the return (and continued evolution) of Ref Cam.

Ref Cam is a single RF camera built into the helmets of two on-ice officials. This iteration of the technology shoots in native 1080 and has become a staple at high-profile hockey events for ESPN, including the 2016 World Cup of Hockey. Developed by Vicareo Systems, Ref Cam was used at the Frozen Four last year, but the camera itself has become much lighter and less invasive. Its lens has also been revamped so that it more closely matches that of the other standard cameras on the show. 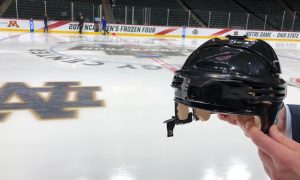 An idea like Ref Cam is the quintessential example of how the relationship between ESPN and the NCAA can move innovation forward and into the mainstream. In cases like this, ESPN will communicate with the NCAA, which will filter the idea to a sport’s rules committee to make sure it checks out. Then, the task is get the sport’s officials on board.

“These angles help give us many of the best possible views of the action from an officiating perspective,” explains Ty Halpin, associate director, playing rules administration, NCAA. “Whether it’s the in-net cameras or an overhead, [ESPN] is always coming up with some interesting options, and Ref Cam is certainly a great one. The ability to put [viewers] on the ice has been very popular.”

Part of the agreement between ESPN and the NCAA is that none of the content acquired by Ref Cam and the accompanying lavalier microphone will be aired live. ESPN editors will cut content on the fly, and it will be viewed by an NCAA supervisor of officials, who will give approval on any footage before it hits air.

Ref Cam is the centerpiece of a production largely focused on taking viewers at home into the overall experience of the event. With 22 cameras on the show, the ice and arena are sufficiently covered, but, according to ESPN Senior Remote Operations Specialist Jack Coffey, upwards of 12 handheld drops are scattered throughout the building in such spots as student sections, family zones, the band positions, and even the concession areas. This give handheld operators the freedom to move around the building and capture the atmosphere of the event. 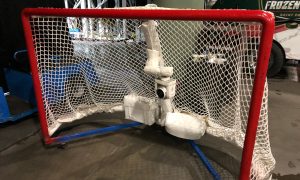 PICO in-net cameras shooting at 3X are positioned inside each goal.

“There’s bands, there’s cheerleaders, there’s students with their faces painted,” notes Bob Fraterolie, who has directed the Frozen Four for ESPN more than a decade. “That’s not what an NHL game looks like. When we first started doing this years ago, executives at the network emphasized that to us. I always tell our crew, If I hear a band, I want to see a band. I make sure the camera [operators] are focused on that, because it does differentiate this event from its visuals and what you hear [from] an NHL game.”

ESPN also has a Sony HDC-4300, shooting at 6X, at the main-game-camera position, and a PICO in-net camera inside each goal is running at 3X. The crew has also added a robotic rocker atop the ice at the centerline. The Grass Valley unit is rolling at 6X and accompanies robos on top of the glass right behind each net.

Although live coverage of the championship game between Notre Dame and Minnesota Duluth will air on ESPN, a special cut of the show will be available exclusively on ESPN3. The stream features natural sound with no announcers and taps into many of the uniquely placed specialty cameras. To pull this off, ESPN is using a synchronous router to push feeds from the main truck (Dome Productions’ Journey) to a smaller “front bench” in the B unit.