At NAB 2018, Cobalt Digital will show its new 9971 series UHD multi-viewers for openGear that provide a wide range of I/O configurations with respect to signal count, signal type, and signal interface options. The multi-viewer base unit handles six asynchronous 12G/6G/3G/HD/SD-SDI signals at the input stage and provides simultaneous 12G-SDI and HDMI 2.0 outputs at up to full 3840 x 2160 UHD resolution, giving users a means of leveraging professional and widely available consumer-grade 4K monitors to display the mosaic image output. In addition to enabling flexible configuration, units in the multi-viewer series increase the pixel space available to source signals while maintaining as much original picture information as possible. 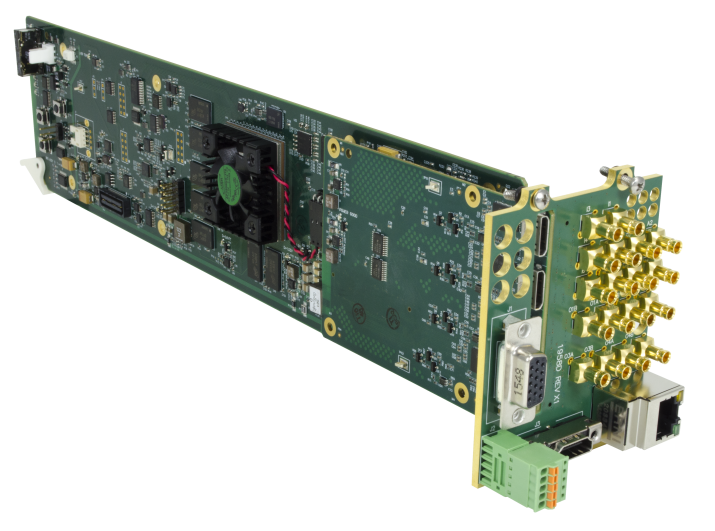 “Our new 4K multi-viewers are the perfect complement to our growing line of 4K production and broadcast products,” says Jesse Foster, Cobalt Digital’s director of product and business development. “We are constantly rolling out new features, and the next-gen platform design will provide years of investment protection for our customers.”

With the additional available resolution, the six-input 9971-MV6-4H-4K can, for example, display two of the 10 total inputs at full 1920 x 1080 resolution while leaving 4096 x 1080 pixels available either for display of the other six inputs or for use as a dynamic DashBoard custom control panel workspace. In the latter example, a computer graphic UI screen is ingested, and active video inputs are displayed over or under the UI screen on the same display. This example uses the 9971-MV6-4H-4K hybrid input version, which adds four independent HDMI 2.0 inputs to the six 12G-SDI base inputs to provide as many as 10 picture-in-picture displays in the combined mosaic output. This configuration is ideal for simultaneous transmission and return-path monitoring using STBs and for displaying computer sources on screen with professional 4K and HD sources in addition to the dynamic background use case mentioned previously.

The 9971-MV18-4K supports up to 18 12G-SDI inputs and, like the aforementioned versions, can be cascaded with other units to create a larger system. Finally, the new 9971-MV6-4K-IP and 9971-MV18-4K-IP multi-viewers both feature dual 10GigE SFP+ cages. By default, both versions support one 3G/HD-SDI input and output over SMTPE ST 2110 or ST 2022-6 IP standards, and additional de-encapsulator and encapsulator licenses are available. In the third quarter, Cobalt plans to release the +DUAL license, which will enable a second fully independent output over 12G-SDI and HDMI 2.0.