JVC Professional Video will be showcasing their new lines of professional cameras at NAB 2018(Booth C4315). These three new series of cameras showcase the latest broadcast, IP workflow, connectivity and innovations from JVC. 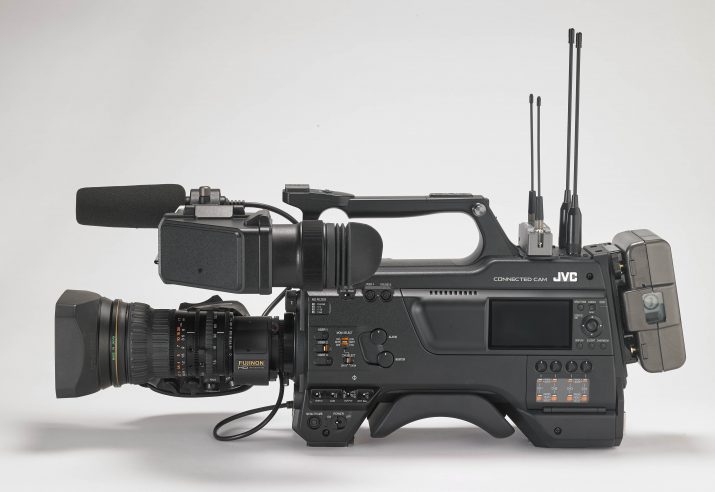 When paired directly with the optional ProHD Dockable Bridge or via Wi-Fi with any ProHD Bridge unit, the new GY-HC900 allows on-air talent to conduct a two-way interview with return video while streaming live to air without any external boxes or backpacks. It is JVC’s first camera featuring a new communications engine that optimizes both image processing and IP performance. The engine enables simultaneous recording, low latency streaming, and simultaneous decoding for return video and IFB. Latency can be as low as 500ms for both outgoing and incoming video.

Beyond ENG, the GY-HC900 is an ideal choice for high-end EFP and studio fiber applications. It works with the FS-900 camera module, which attaches seamlessly to the camera via a 68-pin interface, and feeds 3G-SDI signals, control, audio, sync, and intercom to a base station via fiber.

Equipped with an industry standard B4 lens mount and four-position optical filter, the GY-HC900 delivers excellent sensitivity (F12 at 60Hz, F13 at 50Hz in extended mode) and high 62dB signal-to-noise ratio (in standard mode). The advanced 2/3-inch CMOS sensors, each with 1920×1080 pixels, combine with an F1.4 prism to produce full HD images. The camera also offers an HDR mode for creative flexibility, as well as up to 120fps 1080p slow-motion recording.

The GY-HC900 supports native recording of both MPEG-2 at up to 35 Mbps, which is widely used by broadcasters, and H.264 (.MOV), which provides production quality 10‑bit, 1080/60p 4:2:2 footage. Plus, the camcorder records in Sports Exchange Standard formats, so sports organizations can produce HD video with rich metadata that specifically addresses the workflow needs of sports production and video coaching applications.

JVC To Show New And Improved IP Workflow And Connectivity Solutions At NAB 2018
JVC has been building and reinforcing its IP-based production workflow solutions since 2012, when it announced the GY-HM650 mobile news camera. It was the industry’s first professional camera with built-in FTP and Wi-Fi connectivity. Back then, the GY-HM650 was not considered a serious replacement for microwave or satellite trucks, but times have changed. JVC will show these new and improved solutions at NAB 2018

Beyond IP-enabled cameras, JVC has the components to deliver a complete IP-based solution from. For example, the ProHD Command Center, which was introduced last fall, makes it easy to monitor and track JVC IP assets in the field, including cameras and ProHD Bridge units. It provides a full screen, real-time map of all GPS-enabled resources, allows control of specific camera parameters, offers an optional newsroom system interface, and includes one-touch routing of live video to master control, websites, and social media platforms.

JVC’s lens-to-playout connectivity continues through the ProHD Broadcaster, powered by Zixi. Through its web interface, it receives streams from multiple JVC IP-enabled cameras and routes them to decoders as well as content delivery networks (CDNs) like Facebook. The ProHD Broadcaster can also provide real-time transcoding, record footage for VOD or time shift playout, and provide multiple stream outputs.

Another new component in JVC’s video-over-IP workflow is the BR-DE900 ProHD decoder. It supports H.265 and H.264 compression standards, and is built for portable use or permanent installation. When paired with JVC cameras, the BR-DE900 provides a bandwidth efficient, error-free streaming solution over any network, including the internet. Hardware-based decoding provides optimal quality of service with low latency for ENG field reports and other video-over-IP applications.

The same technology that can drive major market broadcast news can also be scaled to deliver affordable, high-end results for a church, school, or government facility. JVC offers a variety of IP-enabled cameras in a number of form factors (handheld, shoulder, and PTZ) with pricing to suit any budget. The economical ProHD Studio creates a compact control room for webcasts or broadcasts of worship services, student programming, or local government meetings.

A small but powerful part of JVC’s connectivity story is the RM-LP100 remote camera control. Its joystick and zoom rocker provides smooth and precise camera movements for the KY-PZ100 PTZ camera, but it also acts as a virtual CCU for any JVC IP-enabled camera. A seven-inch touchscreen panel provides control of camera groups, presets, and camera settings. The RM‑LP100 is also a key component of JVC’s S.L.I.M. studio camera system, an affordable multi-camera production approach that uses the remote camera control as a CCU for JVC IP-capable cameras.

Even single-camera productions can benefit from JVC’s connectivity. The new GY‑HM250U offers live streaming as well as lower-third and full-screen titling solutions without an external CG or production switcher. Graphics are generated and controlled through a tablet or smartphone, and up to 50 graphics can be stored in the camera. The new GY-HM250SP adds sports-specific score overlays, which can be placed in various screen positions and updated manually or automatically (when wirelessly connected to a Sportzcast Scorebot that is integrated with the venue’s scoreboard.

JVC’s vision of IP connectivity continues to grow. News-over-IP has become a reality, and a number of other vertical markets are now embracing an IP production future. With new cameras and new system components, JVC delivers a complete video-over-IP solution that can be customized for broadcasters or scaled for smaller installations. The result is an affordable approach to video production that delivers high-end imagery and secure, reliable workflows.

Designed for enhanced single-camera production, the GY-HM250U offers lower-third and full-screen titling solutions for recorded or streamed video output without an external CG or production switcher. Lower-third graphic overlays are generated and controlled using a browser-equipped device, such as a tablet or smartphone. JVC also provides a software utility that lets customers upload logos or icons that are displayed in the lower-third of the recorded video.

Full-screen graphics can be advanced manually or presented as a slideshow during extended breaks in the action with user-defined timing. Users can store up to 50 .JPG or .PNG graphics, such as team logos or religious icons, in the camera. Worship facilities, for example, can display scripture readings or lyrics, with the operator manually advancing graphics during the service.

The GY-HM250SP’s score overlays for football, baseball, basketball, hockey, soccer, and volleyball can be placed in various screen positions. Camera operators can update the score using an external Wi-Fi connected smartphone or tablet, or receive real-time scoreboard data automatically when wirelessly connected to a Sportzcast Scorebot that is integrated with the venue’s scoreboard.

Both the GY-HM250U and GY-HM250SP also feature built-in streaming with Wi-Fi and 4G LTE connectivity that provides live access to CDNs like Facebook Live and YouTube. The cameras also work as part of JVC’s S.L.I.M. studio camera system, an affordable approach to multi-camera production that uses the RM‑LP100 remote camera control as a CCU for JVC IP-capable cameras.

Other new features include 4:2:2 recording for 4K/30p and 4K/24p, as well as 4K/60p HDMI output. The new tele macro shooting mode on the GY‑HM250U and GY‑HM250SP provides better focus on close objects than previous models, while the new Zero Config function provides automatic, one-click configuration of the camera when it joins the same LAN as other cameras.

The new GY-HM250U replaces the current GY-HM200U and GY-HM200HW models, while the new GY-HM250SP with integrated sports graphic overlays replaces the GY‑HM200SP. An upgrade to the popular GY-HM170U, the GY-HM180U still outputs live 4K via HDMI, but also adds a 3G-SDI output for connectivity flexibility.

Beyond the upgrades, GY-HM250U, GY-HM250SP, and GY-HM180U retain the professional features valued in the previous 4KCAM models, including a 1/2.3-inch BSI 4K CMOS imager and integrated 12x zoom lens with optical image stabilizer. The cameras record footage in a variety of file formats and frame rates (including up to 120fps slow motion) to economical Class 10 SDHC/SDXC memory cards. Users can record on two cards simultaneously for instant backup or use relay mode for extended recording time. Other features include dual XLR audio inputs, integrated handle with hot shoe, built-in microphone and dedicated shotgun mic mount, and viewfinder and LCD displays.