The company’s Cinema4D is also able to handle next-gen tech, such as 4K and HDR

Maxon rolled out a full slate of demos and case studies at its NAB 2018 booth last week. As has become tradition, the company kicked off the show with a press luncheon, this year’s featuring a Women in Motion Graphics panel. In addition, dozens of Cinema4D users took the stage throughout the week to demonstrate how they use the modeling/animation/motion graphics software in-house.

During the show, SVG sat down with President/CEO Paul Babb to chat about Maxon’s sessions, sports-production trends he sees, the explosion of augmented-reality (AR) graphics in sports, 4K and HDR graphics, and the rise of multi-site collaborative workflows for graphics creation. 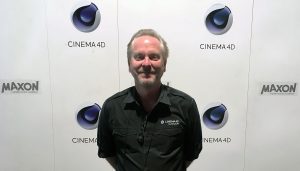 Paul Babb at the Maxon booth at NAB 2018

What are some of the highlights at Maxon’s booth this year?

We also held a Women in Motion Graphics panel that went really well and [was moderated by] Tuesday McGowan, who is a very respected creative director in the industry. The panel [participants] spanned a lot of different ages and different styles with designers, visual effects, and motion-graphics [creators]. We want to make people more aware of the successful women in this industry and empower more women to want to come in. It’s an art form for everyone; it doesn’t have to be male-dominated.

What major trends are you seeing in sports graphics these days?

There’s a lot of interest in expanding on what’s possible for augmented reality and, if it’s possible, to incorporate game engines into the workflow. We’re certainly doing a lot of work to make sure we’re compatible and working with Unity and Unreal for that main purpose. But how can it be taken further? There were some great discussions [at the SVG Sports Graphics Forum] in February, and it seems like everyone is onboard, but how does it get implemented, and what does it look like? So we’re trying to stay tapped in with the studios and find out what they’re thinking.

Are you seeing an increase in the creation of graphics for 4K and HDR content?
It still depends on the studio. For example, we have one [user] capturing 8K video, and we’re working with them on that. We’re a content-creation tool: if they want to use 8K, they can use 8K; it’s just going to require a very powerful machine to throw [graphics] in. But, yes, we have a handful [of customers] that are doing 4K today. [Cinema4D] can handle the data; it’s just a matter of [whether] the hardware [can] churn it out fast enough.

There has been a lot of talk at the show about virtualization and multi-site productions using the cloud. Are you seeing Cinema4D customers explore these kinds of workflows?
Yes. There are a lot of companies creating virtual pipelines and trying to sell those [platforms]. At this point, we are still exploring those systems and how they work with [Cinema4D]. I think it’s slowly getting there.

The interesting thing is that studios that need [more-sophisticated multi-site production tools] the most are the ones that have all the restrictions and aren’t able to use them. And the smaller companies that don’t need it as much can just use frame.io [postproduction collaboration software] for sharing ideas and videos back and forth. But yes, we are going to have to service those kinds of [workflows], and we’re definitely working on it. We want to make sure that our program can fit into any one of those platforms, not just one.