The deadline to enter the 10th Annual SVG College Sports Media Awards in association with NACDA has been extended to Wednesday, April 25. Due to popular demand, we are granting this extension, so don’t miss your chance to have your video production honored on a national stage.   Winners and finalists will be announced at a ceremony on May 31 during the 2018 SVG College Summit (May 30 – June 1, Omni Hotel at CNN Center, Atlanta). 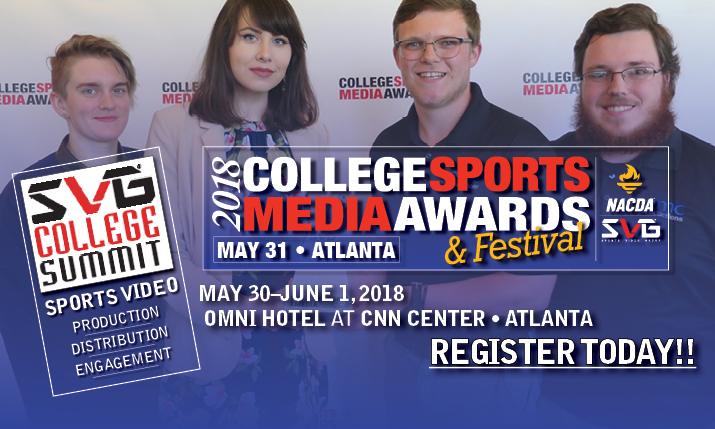 The SVG College Sports Media Awards in association with NACDA recognizes the best in college–sports-video production, celebrating those who have pushed the envelope and set a higher standard for the quality of live and pre/postproduced college sports-video content.

Please keep in the mind that specific key guidelines need to be followed for your entry to be eligible for judging. Some of the reminders for submitting your entries are as follows:

Entries must have originally aired, been made available for download or streaming, or exhibited in public between March 1, 2017, and April 5, 2018.

Entries in the Live Game Production are for games only. Entries featuring other live productions — coach’s shows, press conferences, studio shows, live social-media Q&As, and the like — should be submitted in the newly named Live Non-Game Production category.

Any segment of a live production entered in either of the live categories must be 5 minutes or less.

All submissions in these categories must feature entirely live material. No opens, teases, or features should be included in the sampling.

An entry for the Program Series category should include excerpts from a minimum of three shows, with the total running time not to exceed 10 minutes.

Entries in the Special Feature category may not be longer than 8 minutes.

To qualify as a Special Feature, the entry must be a complete program element with a beginning, middle, and end and not a segment of a longer program.