NAB Reflections: Cisco’s Roger Sherwood Addresses the Future of IP for Media and How It Impacts Sports Production

Two years ago, at NAB 2016, Cisco introduced its Media Blueprint, which essentially serves as a roadmap to grow the use of IP networking and cloud infrastructure throughout the broadcast ecosystem. Now in its third year touting it in Vegas, Cisco introduced several new solutions and programs to the Cisco Media Blueprint. In addition to announcing plans to launch IP Broadcast Training programs midyear, the company introduced its CloudCenter platform to the M&E space to help automate hybrid-cloud environments and also launched its AppDynamics platform for application-performance management.

During NAB 2018, SVG sat down with Roger Sherwood, global industry director, media and entertainment, to discuss how the market has reacted to the Cisco Media Blueprint, the latest solutions being showcased at NAB 2018, what media organizations he sees as ahead of the curve on IP, and when he expects all-IP facilities to become the norm. 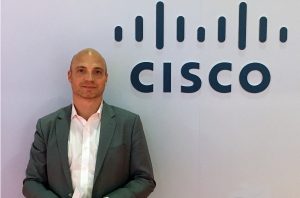 How has the Cisco Media Blueprint evolved since you unveiled it, and what has the market reaction been?

[Our] big theme this year at NAB is what we’re calling the industrialization of media. We started down this track three NABs ago with the Media Blueprint. Year 1 was about planting the flag and [persuading] the industry to trust us and that we are here for the long term. Year 2 was about getting traction with the early customers and proving it is real. This year is about showing how Cisco can be seen as a trusted partner as the technology transition takes place and the vendors consolidate. We’re not inventing anything new here, other than bringing more of the Cisco machine to the vertical. It’s more about bringing more products and more customers into the equation and growing the ecosystem.

And what are some examples of how you are taking that next step at NAB 2018?

We’ve launched training programs for IP and for our IP Fabric solution. The first of those is really a foundational course, where you come into our interoperability labs and get trained on the IP. You are trained on a Cisco switch, but you could then deploy Arista or Juniper in a broadcast facility. It’s agnostic. It’s our way of just helping move the industry forward. If we want to sell these solutions to [media] customers, we understand that we have to help educate them.

This is not to go up against any of the standards bodies’ interops that are happening at very technical levels. It’s more of a place for customers and Cisco and other partners to test and validate these workflows. Our CTO Dave Ward leads that [lab], and his philosophy is, “Let’s bring in Vizrt, ChyronHego, Grass Valley, and [other vendors] and try some cool stuff and maybe something will latch on.” And that’s really what this year is about.

What specific solutions are you highlighting at the show?
AppDynamics has a big presence. Network-management systems of the past were very much focused on getting information from all these network elements and then trying to figure out the root cause of what was happening in a network. App Dynamics does it from the application itself. If you start with any application, databases, web servers, kinds of things drive that application. App Dynamics basically gives you a picture into the specific piece that’s failing in an application.

CloudCenter is our orchestrator across multi-cloud [environments]. We’re showing that with SwiftStack object storage in a Vizrt application and how you can provision that on your [on-premises infrastructure] behind your firewall and set up another instance in Google Cloud and have them talk to each other, provide failover. And [you can] automate all of that.

The last thing we have here is what we’re calling “Ask the Expert.” [A demonstration] at the booth shows how we take our collaboration equipment outside of traditional meeting rooms. [NBC Olympics VP, Information Technology,] Dan Robertson had these in PyeongChang and [at the NBC Sports Broadcast Center in] Stamford, CT. People were walking up to these [collaboration displays] and having conversations about what was going on to bring those organizations together.

All of these things are now part of the Media Blueprint, and we’re very excited to continue to expand upon that.

Now that IP infrastructure is making its way into real-world media use cases, what are some of the abilities it offers?
The big one is [at-home] production, and Dan has talked about that a lot. That’s the leading use case. Customers are asking, “How do I reduce my personnel load at remote sites? How do I just strip that down to the bare basics so I’ve potentially got just a few cameramen plugged into a small rack and then backhaul everything back to Connecticut,” in the case of [NBC Sports]. We’re seeing that model replicated in Europe and in North America. That’s really where we’re seeing these technologies come together first.

Which organization or facility is leading the way in terms of the IP transition?
I think the BBC is being held up as the first real litmus test. Essentially, they don’t want a single SDI port in the new Cardiff broadcast center. But I think everybody else is in a transition. We’re working with a large broadcaster here, and the first one of its affiliates will go live in a few weeks. There’s a plan to convert all the others, but it’s a long-term plan; it’s not going to happen overnight.

When do you expect the majority of broadcast facilities to be using strictly IP infrastructure?
Two years ago, I said it would take five years for the full transition. I’ll probably revise that a little bit and say another five years from now. But the great thing is that people have really latched onto the Cisco IP Fabric solution globally. We can hardly manage the load of inbound requests that want to test this and prove it out.

Do you think sports will be at the forefront of this IP transition in the years to come?
Not necessarily, because I think sports is too critical and it’s in real time. I think sports[-media organizations] will wait until a lot of this technology is completely proven out, so that they can drop-ship and turn-key right away. The sports leagues are very interested in the Media Blueprint, and they’re taking a good look at it, but they feel that there is no need to rush into this. They will slowly step-stone their way to it.