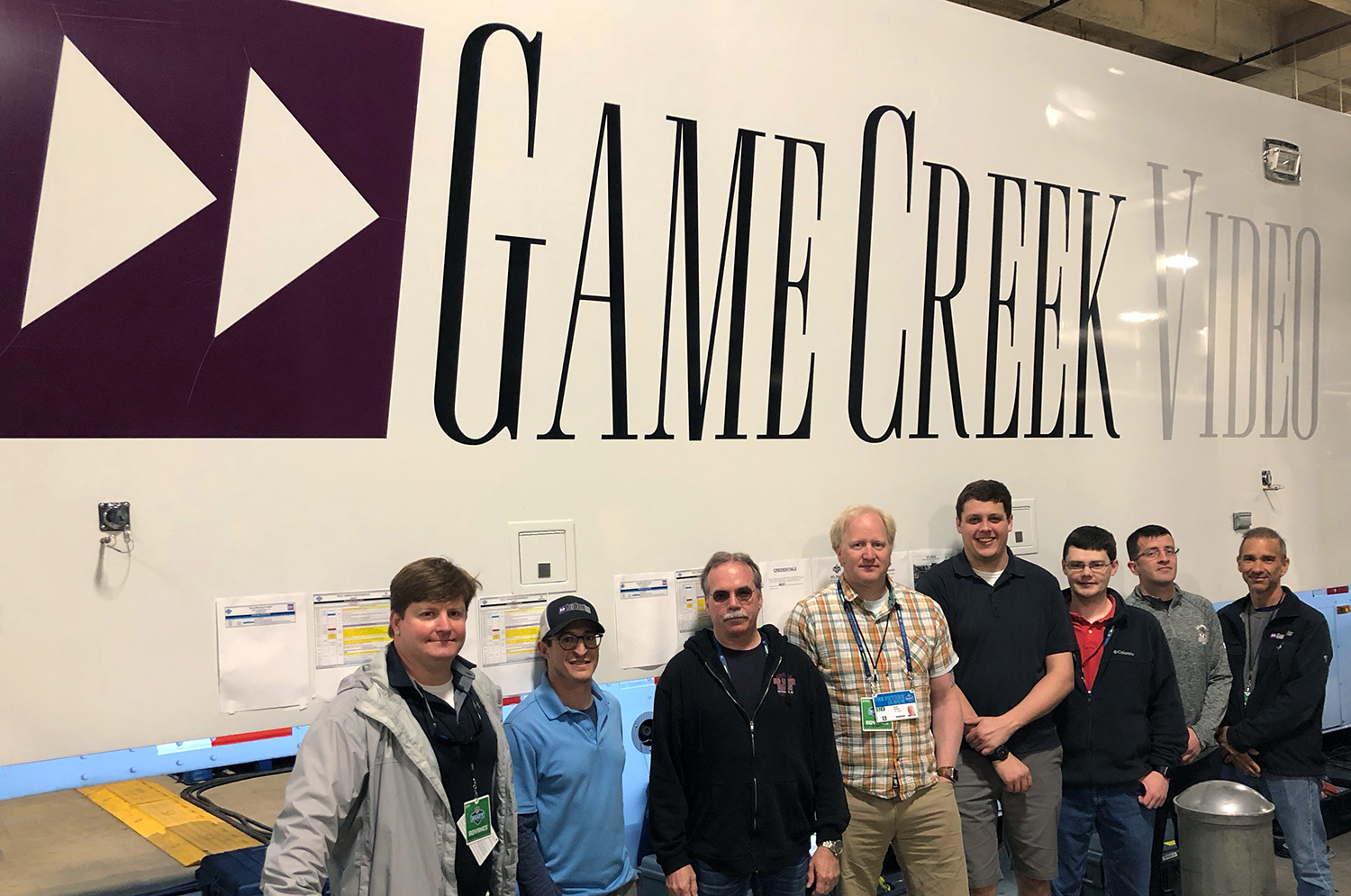 “This show, especially since [the NFL] moved it out of New York and it started going to a different city every year, has absolutely exploded,” said Game Creek Video Senior Broadcast Engineer Brian Ristine during the week before the Draft. “In New York City at Radio City Music Hall, it was really just the Draft itself. Out here, you’ve got this ancillary stuff all over the stadium, which is what makes the Draft such a unique animal. [As a result], it has grown to the point where it demands a high-capacity truck like Encore.”

As one of Game Creek’s most robust mobile units, Encore and its IP routing core have opened up new possibilities for NFL Media’s ever growing operation.

Encore, which is located at AT&T’s main truck compound inside the stadium, and Pride, in the overflow compound outside in the parking lot, have been connected via nearly 1,000 ft. of fiber. The two trucks are fully integrated with more than 100 video paths running between them and the two audio rooms connected via a Calrec Hydra2 network, meaning that NFL Media can select any video or audio source from either truck. In addition, Game Creek has established a MADI audio line between the two trucks as a physical conduit outside the Hydra network.

Game Creek has also created a 10-Gbps EVS network connecting all replay devices in the two trucks. In addition, the company is trunking all of NFL Media assets together between Pride, Encore, and NFL Media’s Culver City, CA, broadcast center. 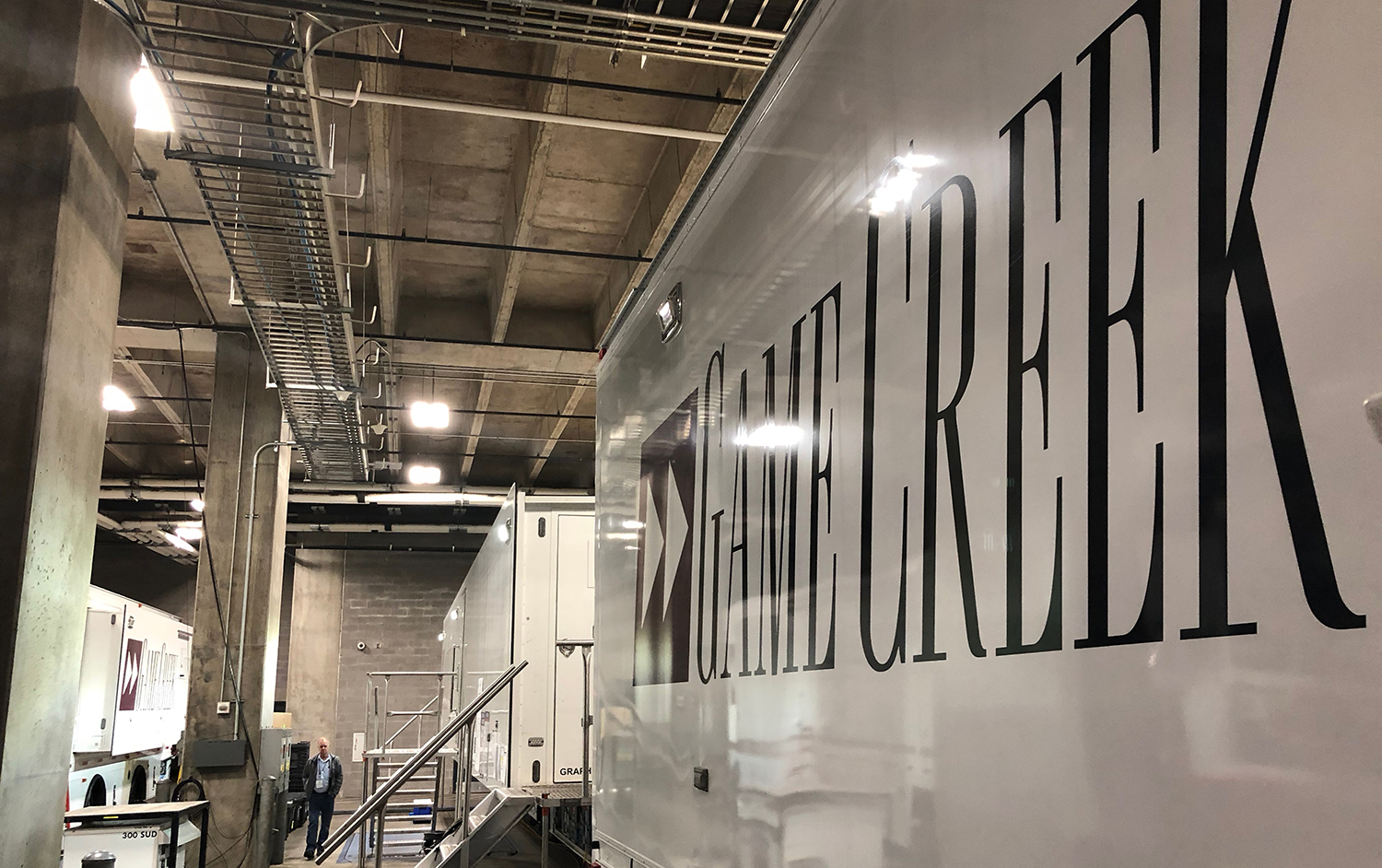 NFL Media is using Game Creek Video’s Encore mobile unit as its primary truck for the Draft this year.

Encore is fully integrated with not only Pride but also the three control rooms that NFL Media is using for NFL Digital Media and video-feed coordination at the Culver City broadcast center.

“[With the setup] here, you not only have control rooms being used in Encore and Pride but also are facilitating three control rooms in Culver,” says Ristine. “You’re taking the old steadfast standard of ‘a truck is a control room’ and saying, ‘We’re going make two trucks into five control rooms’ and building out all of the necessary pieces and elements and equipment for that. Having a truck with all these resources makes you realize what you can add to a show like this.”

In addition to the technical capacity, Encore’s three-trailer unit is physically larger than the mobile units previously used by NFL Media at the Draft — Game Creek’s Pride and Glory — and provides the broadcaster with more space to work with in terms of crew.

“You can really spread out with Encore,” notes Game Creek Video Engineer-in-Charge Chris Monroe. “One of the issues we had with Pride and Glory when we did the two Chicago shows was literally having enough space for butts in the seats. We just ran out of places to put people, so we wound up putting people outside in tents. With Encore’s three trailers, you’ve got more room than you could possibly need. We can house everybody, including robo, which is usually the first people to get moved out.”