NEP’s EN1 trucks are back in the NFL Draft compound for ESPN for the fourth consecutive year, serving as home not only to the network’s primary Draft coverage but also to SportsCenter, NFL Live, and other onsite shoulder programming throughout the week. The full EN1 fleet — A, B, C, D, and E units — is on hand, as it is for all of ESPN’s Monday Night Football productions during the regular season. The primary control room in the A unit handles ESPN’s Draft production, while the secondary control room (typically serving Monday Night Countdown) is handling shoulder programming. 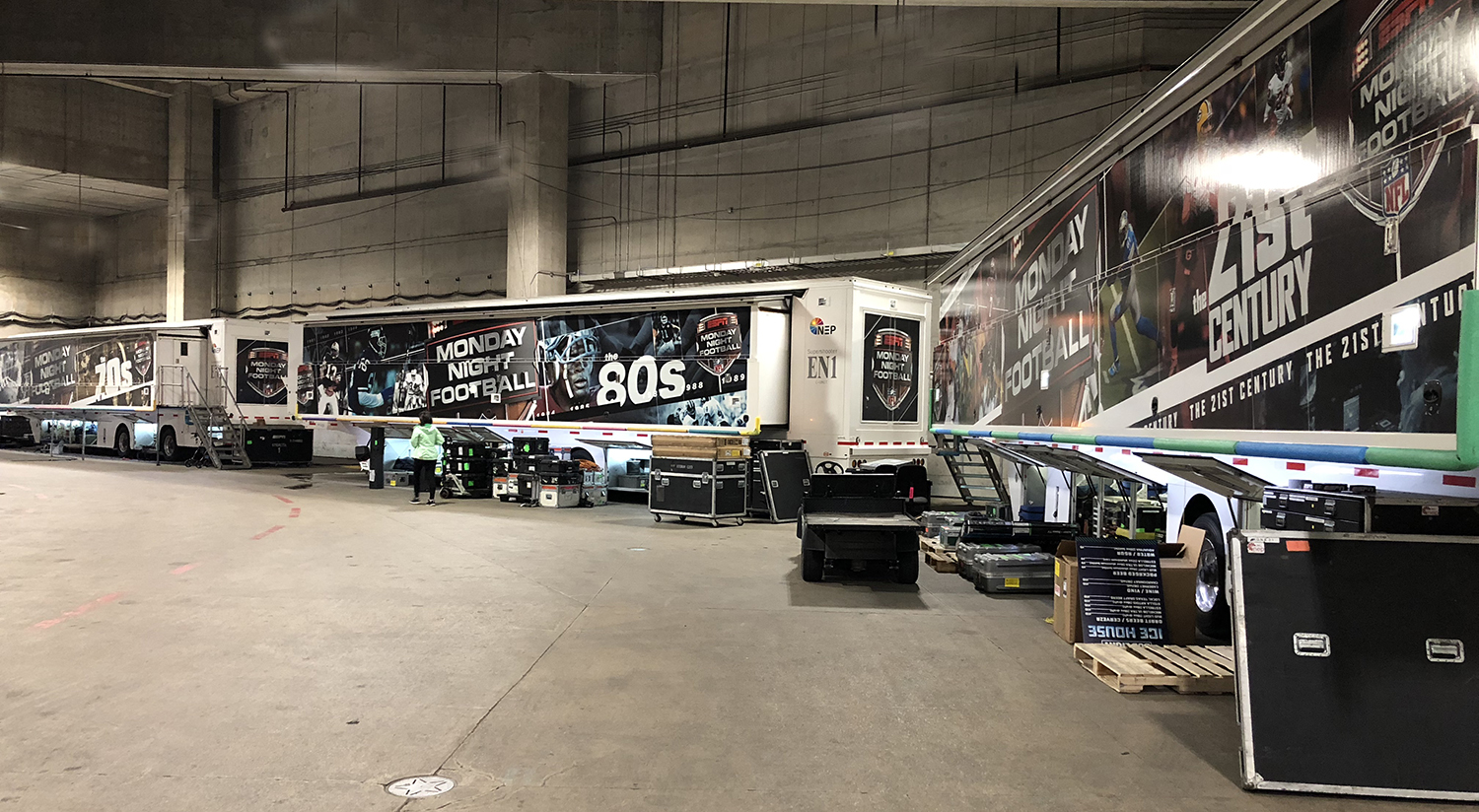 ESPN is using NEP’s EN1 set of production units once again for its NFL Draft coverage.

“We’re very proud to be ESPN’s partner on the Draft, as we are on all their NFL shows, and we work very closely with [ESPN Senior Ops Manager] Steve Carter and his team on this each year,” says Michael Pean, senior account manager, NEP Broadcasting. “The challenge with the Draft, which is exciting, is that it moves [locations] every year now. And, while we’ve been to AT&T Stadium to do many NFL-game broadcasts, this is very different with all the locations both inside and outside [the venue]. In planning for this, it’s important to have the great communication that we do with the ESPN team to figure out how much additional fiber and equipment we’re going to need.”

Prior to arriving in Arlington, TX, EN1 had been in Cleveland covering the NBA Playoffs and was in the A-and-B configuration (with E as a hauling trailer) that ESPN uses during the NBA season. As a result, the trucks pulled into NEP’s headquarters in Pittsburgh to be reconfigured into the A/B/C/D setup before departing for Arlington.

“They did a little bit of prep work and reconfiguring to go back to the four-truck mode because, when they’re in two-truck mode for NBA, it’s very different,” says Bob Walsh, director, engineering, NEP U.S. Mobile Units.

Among the configuration changes: the EVS replay-operator room was moved from the B unit to the C unit, the control room in the D unit was lit up to support SportsCenter and other shoulder programming onsite (the 2M/E Grass Valley Korona switcher is tied to the primary Kayenne K-Frame switcher in the A unit), and additional equipment was added specifically to support the massive Draft show.

“There’s a little bit of transitioning to get ready for this, which is good because, right after this, we’ll continue doing NBA Playoffs and then gear up for Eastern Conference Finals and NBA Finals, when ESPN will use all four trucks once again,” says Pean. “We are able to start planning for that and get ahead of building up facilities for that.”

NEP is also providing more gear than ever at the Draft, with a total of 23 NEP cameras deployed for ESPN at AT&T Stadium (not including specialty cameras provided by Fletcher and BSI), 10 EVS replay systems (three 12-channel XT3’s, four eight-channels, two six-channels, and a SpotBox), and three booth kits.

“It has definitely grown this year; we’ve got more cameras and more replay than we’ve ever had before at the Draft,” says Pean. “Out of the 23 cameras we have here, we have only one hard camera with a big lens on it. Everything else is all handhelds and studio-buildup kits, so that we have the flexibility to move the cameras around as we need to from day to day.”

In addition to EN1, NEP has rolled out its ND7 (A and B) for C3 Presents’ onsite videoboard production at the NFL Fan Experience area. In previous Drafts, C3 has used NEP Trio’s standalone Rhythm truck but opted to expand to twin units this year as its show continues to grow. NEP Operations Coordinator Laura McElroy oversees that operation.