Oath Leads A Video Uprising At Its 2018 Digital Content NewFront 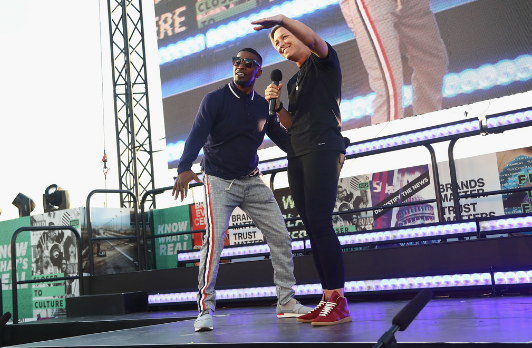 “This is not your typical upfront, it’s an uprising at a time when high quality, brand safe content matters more than ever,” says John DeVine, chief revenue officer, Oath. “We know that brands matter and trust matters to deliver the best video experience for our consumers and advertisers. With our deep editorial expertise in sports, news, entertainment and finance, we’re creating video programming that consumers crave, while making it even easier for advertisers to reach these audiences with three simple ways to buy video and make their dollars work smarter.”

Backed by Verizon and with 5G on the horizon, Oath is combining unmatched content partnerships, unique distribution across mobile, TV and OTT, and more interactive ad formats that will help deliver one billion consumers the video they crave, on every screen, faster than ever before.

The Rush: Yahoo Sports brings fans the must-see moments in sports delivered fun, fast, and on your phone. Hosted by former football player and stand-up comedian Jared Quay and featuring an array of athletes and celebrities, The Rush will be a daily show created for mobile with snackable content on weekday mornings.

The Spin: Yahoo Sports’ best in class reporting, award winning features, and in depth analysis are spun up daily for every sports fan. The video compliment to the in-depth reporting of our star talent, The Spin will bring their insights and analysis to life with this video series.

Soccer Mom: Abby Wambach is the definitive soccer mom of all time – a bad ass game changer on and off the field, she destroys the archaic perception of station wagons and orange peels and tackles the modern-day issues that confront athletes and parents alike. In this captivating and intimate six-part interview series, Abby will sit opposite highly prolific guests who have experienced greatness as athletes from childhood onward and how now they must find balance as mothers, fathers and caregivers.

HuffPost Life: Everyone seems to have an idealized version on how to “live a better life,” and what exactly that means. But what if we cut through the clutter and got real? That’s what the all new HuffPost Life is all about. Already among the most trusted names in news, HuffPost is expanding its scope of lifestyle content — including premium video, podcasts, newsletters and more — to bring its unique perspective to the topics of Parenting, Personal Finance, Travel, Work/Life topics, Relationships. HuffPost Life will also host its inaugural parenting conference in 2018, tackling a broad range topics of important topics, from bullying to preparing kids for conversations surrounding sex and body image.

Storm the Gates: This election cycle, as more women run for office than any other time in history, HuffPost will create the premium, original docuseries, “Storm the Gates.” With exclusive access leading into the 2018 midterms, HuffPost will turn its unique editorial lens towards eight female candidates — from both sides of the aisle — to capture a once in a lifetime moment for the United States. From the height of campaign season through election day, HuffPost will take audiences inside the lives of these powerful and captivating women who are putting everything on the line to demand a seat at the table.

RYOT Studio, Oath Partner with LeBron James Family Foundation on ‘I Promise’ Project
Digital entertainment program BUILD Series takes its popular and extensive live interview show to the next level, adding a new, morning talk show “BUILD Brunch” and a behind the scenes feature program “The BUILD UP,” as BUILD Series continues its commitment to bring its fans closer to culture. Already airing over 4 hours of daily live programming with stars, influencers and leaders at its state-of-the-art BUILD Studio in NYC in front of a live studio audience, the BUILD Series is focused on expanding its live programming efforts with an array of content. In June, the BUILD Series will kickoff a daily live morning show called “BUILD Brunch” at 11 a.m., featuring a roundtable of diverse, young and influential women and men speaking to breaking news, hot topics and the latest in entertainment. Also premiering that month, “The BUILD Up” will launch as the Series’ interactive, hosted interstitial program, which will highlight interviews with fans at the studio and online, and offer a backstage look at guests as they prep for their interview. In the past year, the BUILD Series has hosted nearly 1,300 BUILD interviews with over 3,000 on-stage guests and airs on buildseries.com and across other Oath platforms.

MAKERS to Produce MAKERS GRL PWR LIVE Event To Celebrate Extraordinary Girls
In a world where teens assembled the largest single-day protest in D.C., where girls raise their voices to take down predators, where an 11-year-old invents solutions for a safer planet, MAKERS will present MAKERS GRL PWR LIVE—a 90-minute event for girls by girls. From the creative to the control room, girls will help run the show which will be comprised of powerful on-stage moments structured around real girls who won pre-run challenges and celebrity presenters, including tennis champion Serena Williams, who will deliver surprise announcements throughout the program. Paired with robust digital pre-show programming that kicks off in June, MAKERS GRL PWR LIVE is designed to celebrate and elevate the power and potential of the next generation of MAKERS. Because these are the leaders we’ve been waiting for.

MAKERS Money Series Helps Women Take Control of Their Finances
“MAKERS Money,” created and produced by feminist media brand MAKERS and Yahoo Finance in partnership with women-focused investment company Ellevest, is a weekly show hosted by Sallie Krawcheck, CEO and Co-Founder of Ellevest. Whether it’s bridging the gender pay gap, learning how to crack the code of investing, or finding the best ways to save for retirement, “MAKERS Money” helps women take control of their financial futures and expose a path toward financial equality for women. Season one premiered in February on MAKERS.com and Yahoo.com/Finance and featured guests including author, speaker and advocate Luvvie Ajayi and Morgan Stanley Vice Chairman Carla Harris. The show is executive produced by Nancy Armstrong, Kevin Chupka and Sallie Krawcheck, and produced by Catherine Newman.

Yahoo Finance Extends Live Programing with BBG Ventures
What happens when you mix Squawk Box and The View and make it all about technology? You get BUILTBYGIRLS Live, an honest, fresh and revealing look at the tech industry – through the eyes of women. This fast-paced, lively show will be shot in-studio with a panel of three whip-smart women:

Oath offers advertisers three simple ways to buy video with: content they want to build; creative ad formats to share their message; and programmatic buying to reach their audiences. Advertisers can sponsor or integrate with top-notch video content across one of Oath’s media brands, or create data driven, custom branded content with RYOT Studio that’s activated across the entire network. Oath’s innovative ad formats help brands to creatively tell their story and engage with their consumers while optimizing performance and ROI for their video campaigns. And with Oath’s programmatic private marketplace, marketers can access exclusive content and scalable brand-safe reach.