Audio is the focus of one of the nine Live and Technical categories of the Sports Emmy Awards, which will be presented Tuesday at Jazz at Lincoln Center’s Frederick P. Rose Hall, and ABC/ESPN, Fox Sports, and NBC Sports are nominated for Outstanding Live Event Audio/Sound, having made some wonderful noise covering some of last year’s biggest sports events.

Here’s an in-depth look at the nominees and their shows:

To cover the 2017 Indianapolis 500, ESPN on ABC deployed 287 microphone elements — 235 of which were effects mics — tied together by some 170,000 ft. of fiber-optic cable, underscoring just how much sound there was to capture at the most iconic of all U.S. open-wheel motorsports races. 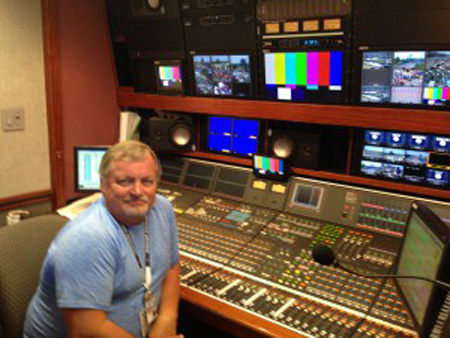 “A football field is 100 yards long, a baseball field is roughly the same size, and a soccer pitch is a bit larger. The Indianapolis Motor Speedway is 2.5 miles long and is the largest-capacity sports venue in the world,” says ESPN Remote Audio Specialist Kevin Cleary, describing the scale of the event from a broadcast perspective. “The drivers make their way around the oval in less than 40 seconds. Capturing the speed and the power of these men and machines in a discrete 5.1 workflow is no small accomplishment. There are multiple reasons for the success of this show, most notably the audio team, which focuses on the goal of capturing the nuances of racing, including speed shots, downshift audio in the turns, driver radios, and, of course, the pit stops.” Add the sound of more than 300,000 fans onsite, in seats and in the infield, and it’s easy to see how the SPL can approach 120 dBA, adroitly captured by A1 Denis Ryan and submixer Steve Urick working with ESPN Remote Production Operations Director Dennis Cleary. “It really is a different event from any of the other motorsports races on television,” says Kevin Cleary. “Much more equipment and manpower are deployed. The sheer size and scope of the project is of a scale far above the average sporting event.” 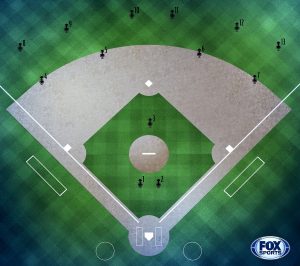 Two of the on-field microphones were located in front of the pitcher’s mound: one for right-handed pitchers, the other for lefties. The remaining 11 spots included one behind the pitcher’s mound, two on either side of the infield, where the dirt meets the outfield grass, and six in the outfield between the infield and the wall. In addition to the on-field microphones, Fox Sports also had two parabolic mics positioned out of play on either side of the field and more than 100 All-Star microphones.

“We experimented with field mics last year in San Diego and got some great results,” says Fox Sports Senior Audio Mixer Joe Carpenter, a 10-time Sports Emmy winner. “The sounds and grunts you get from guys like Max Scherzer and Madison Bumgarner as they complete their pitches add so much to the feeling of being there.”

NBC/NBC Sports Network: NASCAR on NBC, 35th America’s Cup
For NBC Sports’ NASCAR coverage, as many as 35 announce positions were deployed around the tracks. Their configurations comprised traditional three-person booths, dual booths with six announcers interacting, and multiple announce positions around a road course; in addition, six RF announce packs included an announcer driving a race car at speed and describing the track live. The open-air NBC stage setup could be used live, produced directly through the network’s mobile units onsite or remotely through the Stamford, CT, in a hybrid approach using both conventional and at-home–style workflows. The Pit Box announce position, which debuted in 2017, was positioned trackside among the teams, sitting directly on pit road and providing an up-close POV for the crew-chief analysts overlooking pit stops and direct access to team members during race action.

NASCAR is all about effects, and NBC put plenty of those on the sonic canvas. “Painting the ambience for racing can be a very busy job,” observes Denis Ryan, A1 for NASCAR on NBC, who worked closely with A1 Steven Urick, who submixed the track effects. “Each camera cut is matched with opening and closing multiple faders, sometimes even using pedal control of fill sound. At a short track, this can mean five or six transitions during a 16-second lap. Audio-follow is used in certain types of racing coverage, but nothing beats the ‘human touch.’ 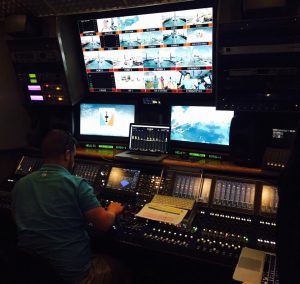 “Microphone mounting,” Ryan continues, “has to take into consideration weather elements, fan access, and dangerous impact locations that can’t be serviced while cars are on the track. Dependability and accuracy is key. Covering audio for 40, 50, or 60 lens viewpoints with 12 working hours to set up and three hours to strike before moving on to the next week’s location is a grind, but it’s worth the effort to get the fantastic sonic results we did.”

For coverage of the 35th America’s Cup, a custom onboard audio system comprised four Wisycomm wireless transmitters and receivers and an antenna-distribution system built into each of the six yachts to enable maximum RF coverage. All eight microphones from each yacht were embedded with two video signals allowing reception of all eight circuits from each yacht at the production compound, sometimes as far away as 5 miles offshore. In addition, four wired effects microphones placed around the boat captured its unique creaks and groans. Two IFB channels were accessible on board the yachts for post-race interviews, and any crewmember could pick up an IFB at the end of the race and be interviewed. This gave the viewer great insight into the team emotions at the end of a race.

“The biggest challenge in achieving a good sound off these yachts was dealing with salt-water spray and, often, in excess of 40 knots of apparent wind,” explains Audio Director Steve Hartley. “We were constantly tweaking our positioning of the microphones worn by the crew each day to reduce any wind noise and salt water getting into the electronics.”