IP Production Forum: At-Home Production, By Any Name, Enables Broadcasters To Do More With Less

As networks expand their reliance on production systems located far from the venue for both cost reduction and flexibility, they increase their reliance on the IP transmission and technology connecting the onsite team with the at-home facilities. At SVG’s IP Production Forum in New York City last week, experts in at-home (also known as REMI and home-run) production took the stage to discuss its limitations and opportunities.

Last month, Fox Sports detailed its production-infrastructure plans for this summer’s FIFA World Cup. The plans call for multiple redundant 10-Gpbs paths via CenturyLink from Moscow to Frankfurt to Fox’s broadcast center in Los Angeles. That transmission path will enable the onsite team not only to deliver linear coverage of World Cup matches but to share content and keep editors at home. 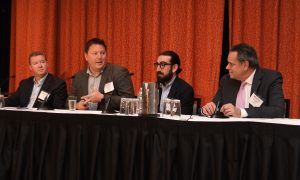 “We’re managing over 100 at-home/home-run productions this year, the biggest one being the link from Red Square in Moscow back to our [Los Angeles] production facility during World Cup,” said Brad Cheney, VP, field operations and engineering, Fox Sports. “We’re seeing continued growth in this space at both the high-level and the low-level events, and we’re also looking at how we modify events going forward to add in different layers of home-run production to our events. Whether it’s postproduction, graphics, editing, replay, or cameras, the goal is to get as many resources to our facility as we can on a daily basis because, going forward, it lets us monetize what we’ve got a lot better.”

The transition to an IP-based, at-home model requires more than just a transmission path. The equipment itself, as well as the mentality of those creating and operating it, must shift away from traditional hardware toward more–software-based systems.

“We can all probably say that, at this point, IP is happening,” said Robert Erickson, IP evangelist for the Americas, Grass Valley. “We’re to the point where we can start focusing on the workflow. What tools do we need to provide to fix the problems our customers have? For us, it’s getting away from the traditional hardware model — this is what this one product does, and this is all it can do — [to a more] dynamic product line: something that can do transport streams at one point and [SMPTE ST] 2110 at a different point and RF for sat com at a different point. For us, it’s being able to generate tools that are dynamic, flexible, and address the workflow [requirements].”

For VISTA Worldlink, at-home production was the leading factor in the overhaul of its South Florida production/transmission facility. Completed in early 2017, the facility positions the company as a go-to production- and transmission-services provider for the U.S. Soccer League, National Women’s Soccer League, and many other clients.

“We had a big challenge of finding a way to produce and distribute over 500 events, so we had to figure out how to build a facility that can handle that much volume in a variety of flavors from top to bottom,” said Joshua Liemer, EVP, VISTA Worldlink. “We literally had to build and create and hedge the bet on a transmission network to be able to bring in that much content and then build out this many rooms and then transform the company from a transmission company to a production company and, even more, an editorial company that tells stories.”

For The Switch, the idea of “at-home” is nothing new. In fact, since its acquisition of HTN Communications (the company responsible for backhauling Ballpark Cam over fiber) in 2012, and even before then, The Switch has been transmitting various applications via IP networks.