ESPN has reached a broad multimedia rights agreement with the Union of European Football Associations (UEFA) to continue broadcasting the UEFA Champions League, the UEFA Super Cup and the UEFA Europa League in Spanish-speaking Latin America, effective 2018/19 to 2020/21. ESPN will carry a total of 71 UEFA Champions League matches each season. Sixty-six matches from the final playoff round, the group stage, the round of 16 and quarterfinals will be exclusive to ESPN and on Pay TV. The semifinals and the final will be non-exclusive. 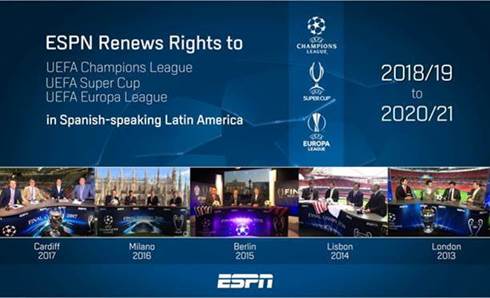 For UEFA Champions League fans, the 2018/19 UEFA Champions League season brings significant changes in the competition format.  More clubs will be able to qualify directly from their domestic leagues and UEFA will implement a new live window format in which matches will take place at 12:55 p.m. ET and 3:00 p.m. ET every Tuesday and Wednesday during the group stage.  The change allows ESPN to offer more live matches than ever before.

“We are thrilled to announce this new agreement with UEFA.  The renewal reflects our steadfast commitment to deliver world-class content to fans across Latin America,” says Tim, Bunnell, ESPN International’s senior vice president of programming and production.  “We have a long history as a UEFA Champions League and UEFA Europa League broadcaster.  These competitions are the most prestigious club soccer events in the world, and we are eager to continue to build on the success we have had over the years in presenting these tournaments to our viewers.”

ESPN’s coverage of the UEFA Champions League, the UEFA Super Cup and the UEFA Europa League will air live across a variety of multimedia platforms. Matches will be televised across all of ESPN’s television networks including ESPN, ESPN2, ESPN3 and ESPN+ and stream live on ESPN Play, ESPN’s broadband network available to fans via internet and mobile devices. Additionally, ESPN will offer extensive coverage including goals and highlights of each match, special reporting and analysis throughout the tournaments via the brand’s regional digital platforms such as ESPN.com and the ESPN App. In addition, for the first time ever, ESPN will also distribute match highlights across its social media platforms.