Is now the time to embrace artificial intelligence and machine learning? Or is it worth holding off for a couple of years as the technologies mature? Those were some of the questions pondered by execs from Akamai, Aperi, and IBM on a panel at this month’s SVG Australia Summit in Sydney.

The most well-known AI system in the world is IBM’s Watson, and Dane Gambrill, business unit executive, IBM Asia Pacific, IBM Watson Media and Cloud Video, said that, by the end of the year, more than 1 billion people will have had an interaction with Watson. 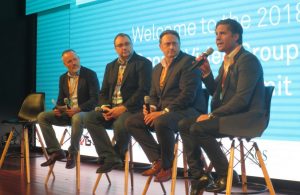 “Whether it is about monetization of a ticket or cost reduction on a process or the supply chain of video, we do believe that Watson is mature and every day the product is getting smarter and more commercial-grade,” he said. “Previously, I would take people to events like tennis and show them the system, and they would ask if they could do something with it for their business, and I couldn’t sell it to them. But now it is commercial-grade, and the quicker you put it into your business, the quicker it will lead to a competitive advantage.”

Panel moderator Stuart Taggart, co-founder/CEO, Envision, opined that the more people experience artificial intelligence, the more they will see the potential: “We will be experiencing it a lot in the everyday parts of our lives.”

Exposure will drive interest in putting AI to use in more and more ways, and, although everyone learns to see the role it could play in their lives, it will also solve what Michael Fay, VP, product and operations, Akamai, described as the big-data problem. Nearly every company in the world is grappling with how to take their massive amounts of data about customers or processes and interpret that data to ultimately improve a business. And, every day, the problem of how to solve the big-data problem grows as more and more data is collected.

“We do 67 million transactions on our network per second and do sampling in five-second increments, but we don’t have enough capability to collect all the data from 250,000 servers and then make decisions based on it,” Fay said. “But, eventually, we will use it to improve performance and behavior of the network and to self-heal the network.”

With respect to a specific role within a broadcast production or distribution environment, David Drew, senior technology manager, Asia Pacific, Aperi, observed that the move to AI and machine learning is giving everyone involved in sports production a chance to look at how content and related data are captured, stored, and used in real time.

“You can virtualize all production as opposed to adding another box,” he said of the move to virtual machines or GPUs that can be reprogrammed to handle different functions. “It enables you to spin a service up and down and dynamically reconfigure your production and network environment to suit your demands.”

For example, a virtualized environment would allow a production team at an event like The Masters to spin up all resources to focus on the last holes of the tournament and then quickly retask the machines to handle functions that allow creation of highlights or postgame coverage.

“One of the functions of network-based processing is dynamically changing what you are doing based on triggers,” he explained, adding that AI can be used so that the machine can learn how to process video and audio signals in a seamless manner. “That [kind of function] is where it is all going.”

Gambrill added that AI is at an inflection point and at a new level of sophistication: cognition and the ability to understand, reason, and learn from each data interaction. At The Masters, for example, AI can allow golf fans to create their own “My Moments” related to favorite golfers.

“With 7,000 shots over four days,” he pointed out, “you are going to miss a moment; you can’t watch everything at once due to the concurrent play. And we are making the ‘My Moments’ personalized with a little bit of data from the customer about their favorite player. The app then has highlight reels of their favorite player and others.”

Another challenge is to move AI from the edges of a business to the center so that it can truly enable better business decisions. With sports specifically, that begins by drawing data from all four fan segments: those who want a converged experience, those who want statistical insights or follow a fantasy team, those who want to interact, and those who don’t care about the results but are tied into the social aspects.

“With AI, you can open all four segments up to do something like choose their own adventure,” said Gambrill. “You can bring design or content recommendations, but, at the end of the day, you have to let the consumer choose their experience.”

The return on investment of an AI system is always an issue, and one of the more pragmatic ways that IBM’s Watson AI is currently making a difference on ROI is with closed captioning. Not only is AI meeting the demand for media to become more inclusive and accessible to the disabled, but even fans who can hear are tapping into captioning at the gym, say, or in a public place.