The National Basketball Association (NBA) announced the launch of 360 Portals, an augmented reality (AR) experience available in the NBA AR app that allows fans to live
within memorable, behind-the-scenes moments from the 2018 NBA Playoffs and Finals. The NBA AR app, which launched for iPhone in October 2017, is now also available for free on Android devices. 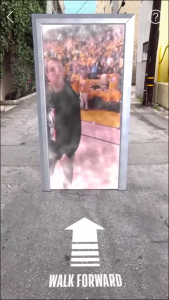 In addition to featuring several AR experiences from the NBA Playoffs, including team huddles, player introductions, and postgame celebrations, 360 Portals will include special on-demand NBA Finals content that will be captured and made available throughout the series. Using Apple’s ARKit and Google’s ARCore technology, 360 Portals superimpose a virtual door which fans can walk through to immerse themselves in the NBA action.

“360 Portals will bring NBA fans behind the scenes and onto the court, providing a new way to experience the game through augmented reality,” says Melissa Rosenthal Brenner, NBA Executive Vice President, Digital Media. “We hope fans around the world check out the NBA AR app throughout the Finals for a unique perspective on our biggest event of the year.”

360 Portals is the latest AR offering from the NBA. In October 2017, the NBA became the first U.S. sports league to offer an AR game when it launched virtual pop-a-shot on the NBA AR app. The game allows fans to play virtual pop-a-shot from any point in the world through AR technology.