Audio Technica has been busy at InfoComm 2018, upgrading its entire line of network microphones and devices to be AES67-compatible, as well as highlighting the ATDM-0604 is a six-channel automatic mixer and unveiling the fourth generation of its 3000 Series wireless systems, and more. 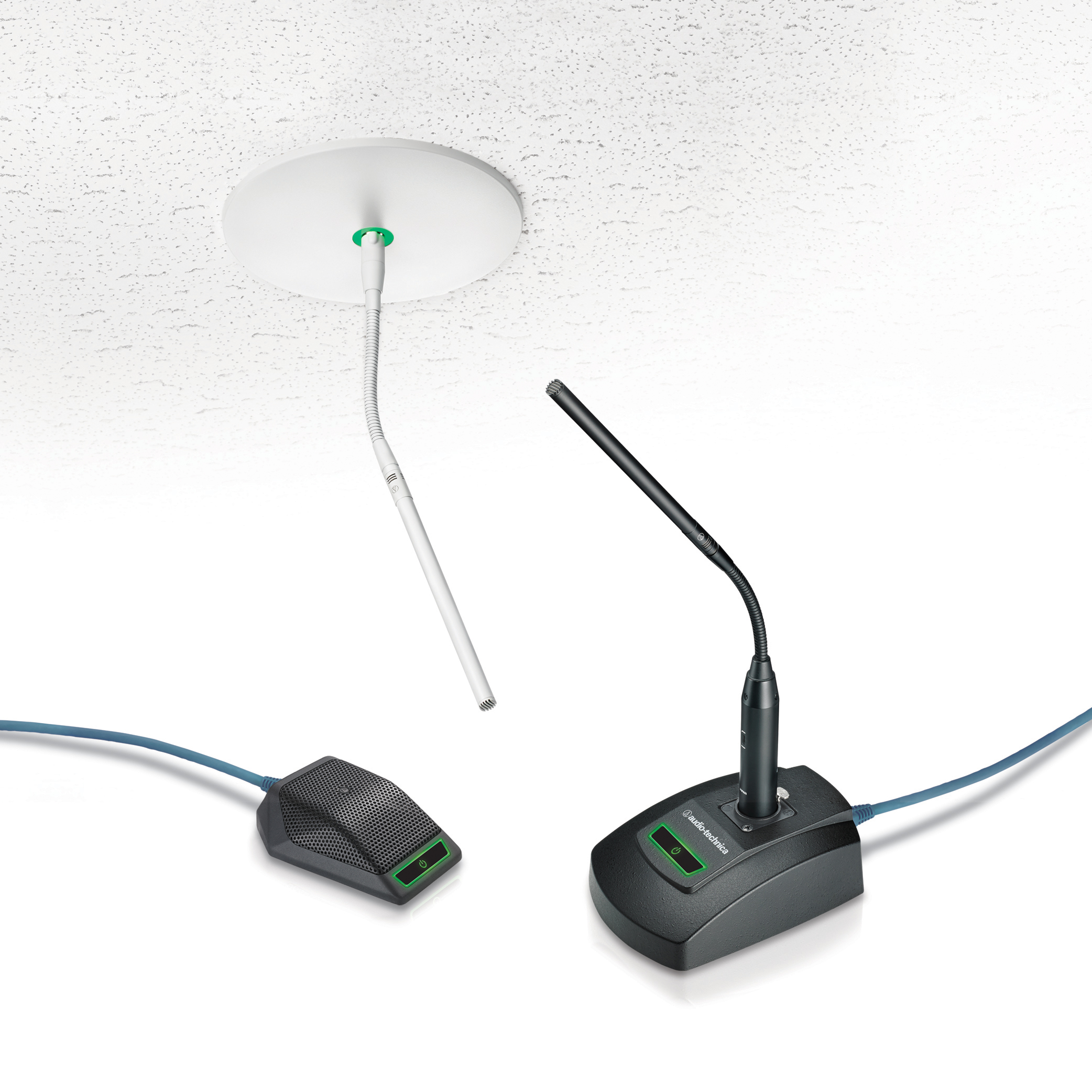 Audio-Technica has upgraded its entire line of Network Microphones and Devices, offering new AES67-compatible “a”-designated versions of all its previous models.

These new Network Microphones and Devices are designed for audio-over-IP interoperability, connecting directly to any AES67-compliant network, including those that utilize Livewire, RAVENNA, and Q-LAN AoIP technologies. Otherwise, these microphones and devices function as before, providing the same talk/mute, gain, low-cut filter and LED controls as their predecessors, and retaining their ability to transmit control data over Dante networks. In addition, the latest firmware increases the Dante Domain Manager features, adding role-based security, cross-subnet routing, SNMP alerts and more. With increased connectivity for audio streams and expanded Dante features, these new Network Microphones and Devices give users plug-and-play access to nearly any AoIP system.

ATDM-0604 Digital SmartMixer
Featuring intuitive use, superior echo-canceling and flexible web remote functionality, the ATDM-0604 is a six-channel automatic mixer ideal for meetings, conferences, soft codec applications, courtroom proceedings, radio and TV broadcasts, and other applications involving the use of multiple microphones or other media inputs. The mixer is equipped with four balanced microphone inputs, two balanced Mic/Line inputs and one unbalanced stereo input, along with two balanced and two unbalanced outputs. Network (Cat5e or better) and USB ports are also included, as are A/B Audio-Technica Link ports that let users connect six ATDM-0604 mixers via Cat5e cable for simultaneous use within an expanded setup.

SmartMixer technology allows channels to be mixed automatically in gate or gain sharing mode, ensuring consistent, high-quality audio output from all inputs in a setup, without the introduction of feedback, excessive ambient noise, or comb filtering. Controls and LED indicators on the mixer’s front panel allow users to easily adjust input/output and gain levels; set and recall presets; turn on/off phantom power, low-cut filter, automatic mixing and acoustic echo cancellation (AEC); change IP configuration (Auto or Static); and more. A full complement of digital signal processing is available for inputs and outputs including parametric EQ, compressor, limiter and feedback control. Control and monitoring tools are accessible locally on the front panel or via the Web Remote interface, which allows users to handle the aforementioned adjustments from a Windows-based PC, Mac, iOS or Android device, plus make additional changes to the input and output settings, select gate or gain sharing mode when using Smart Mix, and adjust other advanced settings.

Fourth-Generation 3000 Series Frequency-Agile True Diversity UHF Wireless Systems
Providing easy setup, versatile operation and rock-solid, richly detailed high-fidelity sound, A-T’s fourth-generation 3000 Series wireless systems give users the power and flexibility to operate within the congested UHF spectrum. With a class-leading 60 MHz tuning range, which is more than twice that offered by the previous versions, the new 3000 Series systems are available in two frequency bands – DE2 (470–530 MHz) and EE1 (530–590 MHz). The 3000 Series even lets users set a backup frequency that can be quickly swapped by pressing the transmitter’s multifunction button in the event of unexpected interference. 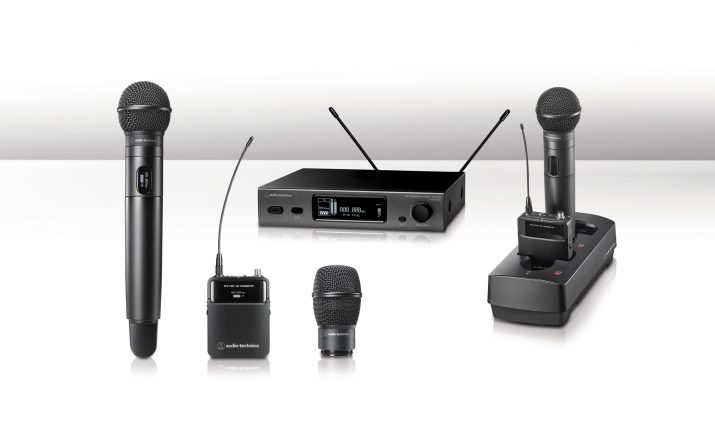 Available system configurations feature an ATW-R3210 receiver along with an ATW-T3201 body-pack or ATW-T3202 handheld transmitter. The ATW-T3201 is equipped with Audio-Technica’s new rugged cH-style screw-down 4-pin connector for secure connection to A-T’s cH-style lavalier and headworn microphones, or cables. The ATW-T3202 comes with either an ATW-C510 dynamic or ATW-C710 condenser interchangeable cardioid capsule, and its industry-standard thread allows for the use of A-T and other compatible capsules. Both transmitters feature rugged, metal housings and are powered by two AA batteries. Charging terminals on each transmitter work with the ATW-CHG3 and networkable ATW-CHG3N smart charging docks (sold separately) to recharge NiMH batteries. Antenna power is available for powered antennas and other in-line RF devices. A ground-lift switch helps eliminate audible hum caused by ground loops. The systems feature balanced and unbalanced audio output jacks.

New Firmware Available for Audio-Technica’s ATUC-50 Digital Discussion System
New features include an increase of the maximum number of delegate units (ATUC-50DU & ATUC-50IU), from 50 to 100 per ATUC-50CU (and the maximum number when using three ATUC-50CU’s is now 300); support for the ATUC-50IU Integration Unit for discreet installations, and a number of other practical features and upgrades (which can be found on the product website at audio-technica.com). 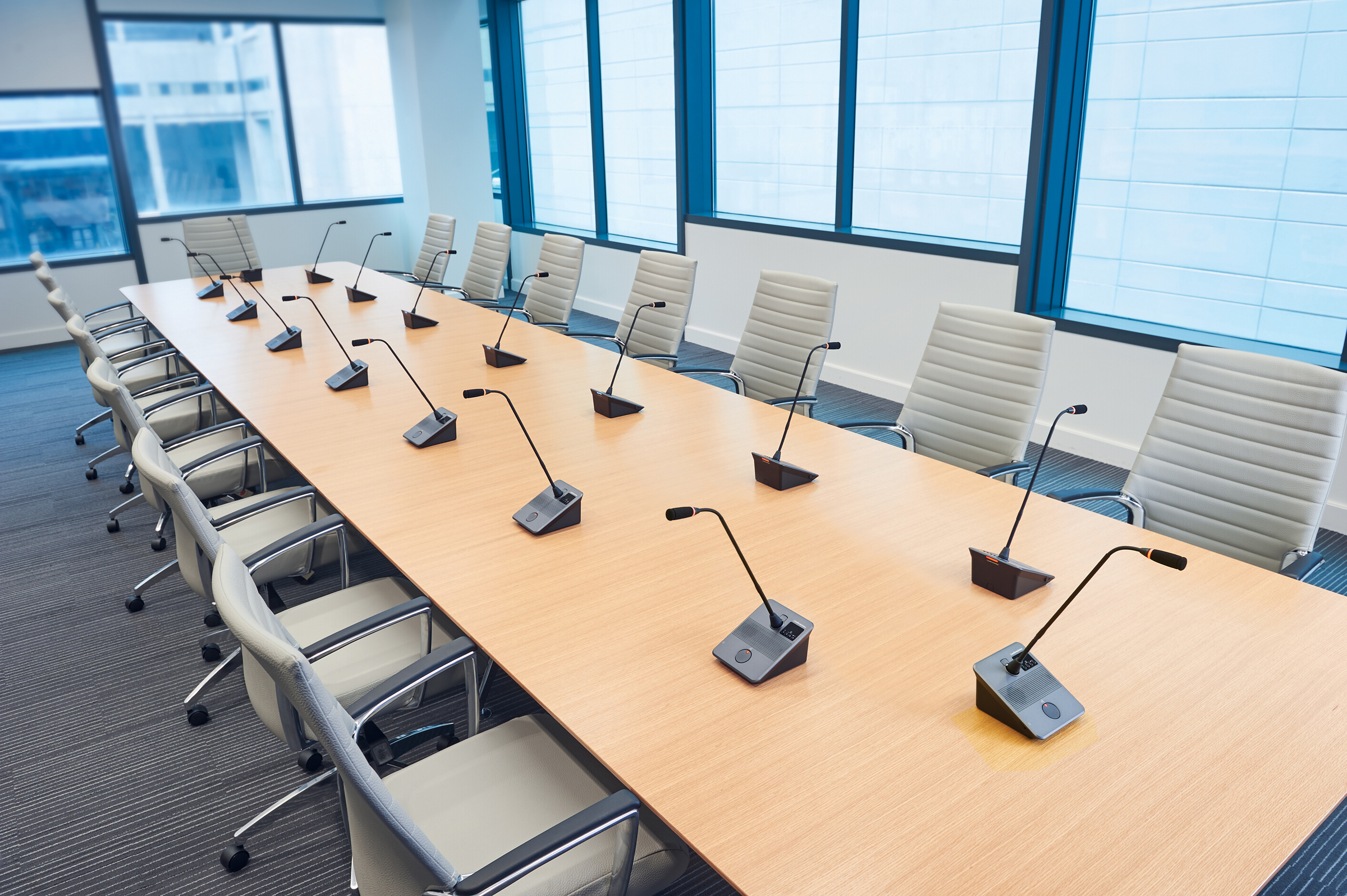 New ATUC-50CU Control Units shipping as of April 2018, come standard with version 1.6.1. For customers who currently have an ATUC-50CU and would like to upgrade to 1.6.1, they can do so by downloading the firmware for free from the ATUC-50 product page on the ATUS website.

Third-Generation 5000 Series Wireless
The new 5000 Series dual receiver offers the highest-quality wireless live sound, with A-T’s dual-compander circuitry that processes high and low frequencies separately and True Diversity operation. The receiver has been updated with a tuning bandwidth of 148 MHz: 470–608 MHz and 653–663 MHz (duplex gap), and users now have the option of selecting a standard receiver with two balanced XLR outputs (ATW-R5220) or a receiver that also includes a Dante output (ATW-R5220DAN). The full-rack receiver chassis holds two independent receivers and offers antenna power, frequency scan, IR sync functionality, a ground-lift switch, and a front-panel headphone jack. Other new features include an antenna cascade output that connects up to eight receivers,  an auto squelch feature that automatically adjusts the squelch setting to maximize operating range while minimizing potential interference, and a backup frequency that can be quickly swapped by pressing the transmitter’s multifunction button in the event of unexpected interference. Software enables remote monitoring and control of the wireless system.

Expansions in Trade-In Rebate Program for 600 MHz Wireless Systems
Audio-Technica has expanded its existing trade-in program for 600 MHz wireless systems to now include the new 3000 Series (4th Generation) and 5000 Series (3rd Generation), as the industry moves away from wireless systems operating in the 600 MHz band (614 to 698 MHz), mandated by law as a result of the ongoing FCC wireless spectrum reallocation initiative. The program, which runs through March 31, 2019, is designed to help wireless users switch to a new system that accommodates the new guidelines outlined by the FCC.

The transition period will create an uncertain operating environment for users of 600 MHz wireless systems, who will be affected differently depending on their geographic location. Audio-Technica’s extended trade-in rebate program allows additional flexibility and options for this important switchover. Due to the complexity of the reallocation and the number of parties involved, there is no way to accurately predict just how – or when – individual users will be affected by these changes. A-T is offering a “Trade In On Your Terms” program whereby for each 600 MHz wireless system you trade in (regardless of manufacturer) you’ll receive a rebate on an eligible Audio-Technica wireless system. This trade-in program runs from August 15, 2017, through March 31, 2019.

TS Tech Americas Deploys a 32-Seat ATUC-50 Digital Discussion System at Its Headquarters for North and South America
The Japanese company, a global supplier of automobile seats and interiors to major automobile manufacturers worldwide such as Honda Motors, has operations in 72 locations in 14 countries. The headquarters of the company’s American division, TS Tech Americas in Reynoldsburg, Ohio, manages over 9,000 employees based in Ohio, Alabama, Nebraska, Texas, and Indiana, as well as in Canada, Brazil, and Mexico. 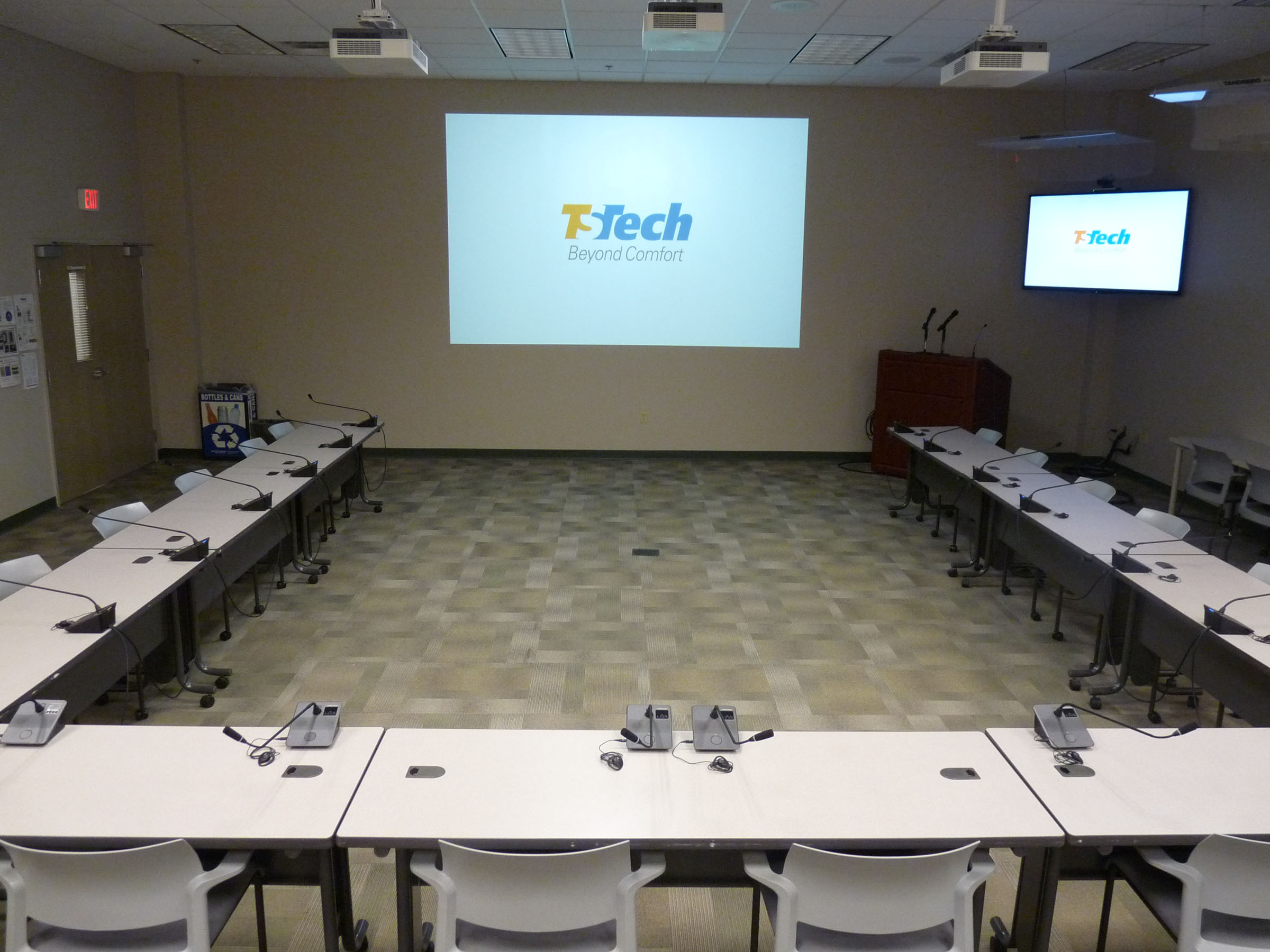 Conference room at the TS Tech headquarters for North and South America, featuring an ATUC-50 Digital Discussion System from Audio-Technica.

In addition to the ATUC-50 and ATUC-M58H gooseneck microphones specifically designed to be compatible with the system, TS Tech is also employing an Audio-Technica System 10 PRO wireless microphone system for conference applications. Shimizu adds that the quality of the System 10 PRO microphones’ elements is “superb,” and “although it is a digital system, I don’t hear any latency due to digital-analog conversion, and these microphones match very well with the audio picked up by ATUC-50 discussion units.”