Nitro Circus will ramp up its partnership with Facebook in 2018 by delivering 28 exclusive live broadcasts on the platform starting this summer. These will include events in a newly expanded 2018 Nitro World Games as well as live streamed segments from Nitro Circus’ upcoming arena tour. The agreement will also feature Nitro Circus-produced original shows that will bring fans closer than ever to the incredible athletes vying to compete in each competition and performing at Nitro Circus shows across the globe. 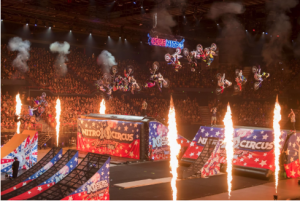 Nitro Circus and Facebook continue their partnership by adding 28 broadcasts to the platform.

“Nitro Circus has invested heavily in video on Facebook for many years and it is the best platform to turn users who like our content into long-term Nitro Circus fans,” says Mike Cowan, Nitro Circus’ Chief Digital Officer. “In large part due to Facebook, we have consistently had some of the most engaged digital fans in sports and entertainment. It is a natural extension to broadcast our live events directly on this platform, since it is where almost 20 million of our fans already are worldwide and it is the best place to create online conversations and communities.”

“We’ve seen a strong community form around action sports on Facebook — and Nitro Circus is a big reason why,” says Devi Mahadevia, Facebook’s Live Sports Programming Lead for North America. “The brand does an exceptional job of engaging with its fans on the platform, so we’re thrilled to partner with it to deliver an exciting slate of both live and original content this year.”

In addition to this slate of live events, Nitro Circus will also produce two new original series for Facebook. Premiering in mid-July, Unlocked will follow up-and-coming action sports athletes from around the world as they battle for a spot at the 2018 Nitro World Games. Unlocked will feature legendary athletes mentoring young hopefuls, culminating in high-stakes competitions to unlock coveted invitations to compete in the Nitro World Games. Then, debuting later this year, another yet-to-be-titled original series will focus on the world-class FMX, BMX, Skate, Scooter, and Inline athletes that tour the globe with the Nitro Circus live show, as well as profile hometown heroes, fan favorites and more.

“With this innovative partnership we can’t wait to not only grant our fans more access but to have them share the experience with their friends and others fans from around the world,” adds Nick Crooks, Vice President – Global Head of Digital Partnerships and Distribution for Nitro Circus.

For both the live broadcasts and Unlocked, Nitro Circus will deliver broadcast components specifically tailored for Facebook Watch, including interactive elements that engage communities and create conversation. For the first time, Nitro Circus will incorporate fan voting into its live broadcasts — giving viewers the ability to compare their scores to those of the official judges as well as to vote in polls that will directly affect the live show. During the Unlocked series, fans will be able to participate in live Q&A’s with the featured athletes and weigh in on who should be selected to compete in the Nitro World Games.

Nitro Circus premiered Mic’d Up on Facebook Watch last September as part of the platform’s high profile rollout, and the series recently returned for its second season. Mic’d Up gives viewers an up-close look at the high-adrenaline world of Nitro Circus — going inside the helmet and giving an unprecedented behind-the-scenes perspective on its athletes and their commitment to progress action sports.