Shane Sanford has one of the busiest jobs in college sports broadcasting. As Assistant AD for Broadcast Services at Ole Miss Sports Productions, Sanford leads a team responsible for video board content and telecasts of more than 120 University of Mississippi sports events each year. That includes home games for the school’s storied football team, as well as men’s and women’s basketball, soccer, baseball, softball, and volleyball — with live broadcasts available through the SEC Network and ESPN Regional Television. 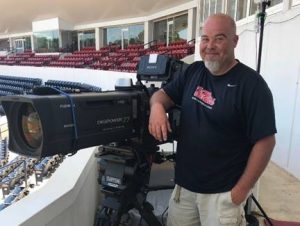 With events happening year-round, Sanford has learned the value of high-quality production gear. In choosing lighting, cameras, and camera support products, he looks for systems that are flexible and can be applied in a variety of production environments. He also needs tools tough enough to stand up to almost daily use by a constantly changing crew of pros and students. And, of course, the gear has to be affordable to fit within the school’s limited production budget.

One name that Sanford has learned to rely on is Cartoni. In 2016, as part of a major upgrade of its broadcast equipment, Ole Miss purchased a package of Cartoni camera support products from Manios Digital & Film. That included six Cartoni Magnum fluid heads and two Cartoni Focus 22 fluid heads, along with compatible Cartoni tripods. With a payload capacity of 209 lbs., the Magnum heads are an ideal pairing for the camera packages Ole Miss uses for capturing live sports. They typically include Sony HDC-1700 multi-format cameras and Fuji 77x or 55x telephoto lenses.

Sanford was introduced to Cartoni through Mark Barber, principal of Universal Media Services a systems integrator in Pensacola, FL. That led to a demo with Manios Digital founder Steve Manios. “When Steve came by my office and showed me how easy the heads were to work with and how durable they were, I was very impressed,” Sanford recalls. “The Magnum head and tripod can be set up and leveled quickly, even on uneven surfaces or mud. And the head’s counterbalance is insanely awesome. If the camera is not centered properly on the head, you can bring it back into balance simply by sliding it one way or the other with a fine-tuned hand crank — even with a full payload!”

“We use both 77x and 55x lenses and the weight is different,” he adds. “Once we determined that the 77s weigh 85 pounds and the 55s weigh 75 pounds, each on a sled with a high center of gravity, set up became simple. Even before we slap the sled on, we know where we’ve got to get to. The Magnum head is far ahead of any other tripod head I’ve seen.”

Ole Miss uses its Cartoni Focus 22 heads, which have a capacity of 49 pounds, for stand-ups, tight spaces, and booth locations. “We also use Focus 22 for smaller venues when we have head-to-head events,” Sanford says. “We place our hand-helds on them and occasionally use them for game action. They perform great…lightweight and easy to use.”

Sanford notes that his camera heads need to be simple to operate because many of his camera operators are students with little or no previous broadcast experience. “The learning curve with the Cartoni heads is very short,” he explains. “We do a training session in the summer for new students and a refresher course for returning crew. We tell them exactly how we want things done and how the cameras and support systems work. They may not understand why things work the way they do, but they know they have to make sure the bubble is level.”

Sanford brings a wealth of experience to his role at Ole Miss. He began his career in Orlando, Florida on the reality series American Gladiators, and later worked with the Tampa Bay Devil Rays and NBC affiliate WTVA in Tupelo, Mississippi. In 2014, he won two Emmy Awards for his work on The Season: Ole Miss Football. He has two additional Emmy nominations, one in 2004 for First Down on FOX and one this year for LIVE Sporting Event Coverage. He is also the recipient of several Telly Awards, including one for the DVD One Heartbeat, a chronicle of the 2008 Ole Miss football season.

In his decade with the school, Sanford has covered many memorable sports events. Among his favorites was a 2015 football game when Ole Miss took on arch-rival Alabama. While the Crimson Tide came into the contest cruising toward a national title, Ole Miss pulled off a stunning upset, winning the game 43-27.

Witnessing such special moments and sharing them with the school’s huge fan base is very rewarding. “I love what I do,” says Sanford. “I’ve always said that if you’re unhappy with your work, life is hard. But, I’m very lucky. I get paid to cover events that I would gladly pay to attend myself.”