In a continuing initiative to offer its fans the most compelling immersive and behind-the-scenes experience, Pac-12 Networks has worked closely with YouTube to create VR180 content for YouTube at several of the conference’s major sporting events this season. After being invited by YouTube to experiment with the new VR format, Pac-12 Networks staff was able to quickly and easily create immersive 3D content as featured below and on YouTube’s Virtual Reality channel. 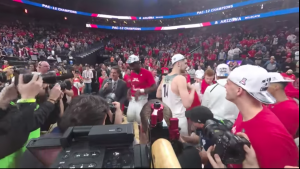 DeAndre Ayton and the University of Arizona winning the Pac-12 Men’s Basketball Championship through VR180.

“We’re excited to continue Pac-12 Networks tradition of innovation with leading technology companies and to experiment with new methods of connecting our fans to the schools and sports they love, and drawing them into the live-event experience,” says Mark Shuken, president of Pac-12 Networks.

Some recent moments captured in VR180 by Pac-12 Networks include:

The initiative with VR180 is part of Pac-12 Networks continuous effort of utilizing new technologies to deliver compelling content experiences and connect fans in new ways to Pac-12 universities and sports. The work also continues a growing relationship with Google over the past several years for Pac-12 Networks, which has seen the launch of a multi-channel network on YouTube in 2016 as well as the Networks’ making its live content available across the globe wherever YouTube is available.

In addition to being featured on YouTube’s “Discover VR180” playlist (also available on youtube.com/VR within the Discover VR180 playlist), all of the Pac-12’s VR180 content is also available on the Pac-12’s YouTube channel.
The videos can be enjoyed on YouTube everywhere and in 3D on Google Cardboard and Google Daydream View, as well as other VR devices that support YouTube — allowing users to view the moments stereoscopically in 3D.