How Did They Do That? The Tech Behind the ActionStreamer HelmetCam

The age of the player-worn camera is here. On June 22, Monumental Sports Network live-streamed an AFL game between the Washington Valor and the Philadelphia Soul that will go down in history as the first to provide fan access to live videos shot by the players themselves. Two players wore HelmetCams, created by ActionStreamer, to deliver a whole new view of the action. 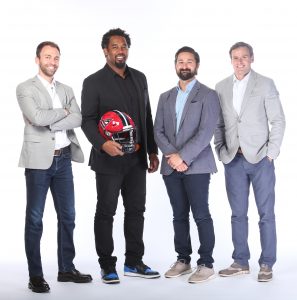 The game also marked the end of a two-year development cycle for ActionStreamer. The HelmetCam was conceived of by company co-founder and Chief Strategy Officer Dhani Jones, an 11-season NFL veteran.

Following the HelmetCam launch, SVG talked to ActionStreamer CEO Max Eisenberg about how the helmet works. The hardware, surprisingly, is nothing special: it uses an off the shelf wide-angle camera to capture 1080p video at 60 frames per second (the next iteration will include a fish-eye lens). What makes it special is the software.

ActionStreamer holds six patents on its image-capture and -stabilization technology. Live video is first streamed to a broadcast area in the stadium via multiple methods. The company has an FCC license to operate on certain radio frequencies and also uses part of the ISM 5 GHz space that isn’t part of the 5 GHz consumer space. Having redundant transmission methods is crucial.

The number of HelmetCams on the field can vary. ActionStreamer started small: the AFL offered two each for its first games, worn by the quarterback and a key defensive back on the Washington Valor. If, in the future, a league wants all 22 players on the field to be HelmetCam-equipped, 10 or 15 of the signals might be live with the rest in a near-live mode and used for instant replays. The producers might reassign which helmets are live midgame, Eisenberg suggests.

The main challenge in creating the HelmetCam was miniaturization — simply getting the parts small enough to be tucked inside a helmet — and then getting it to stream live. 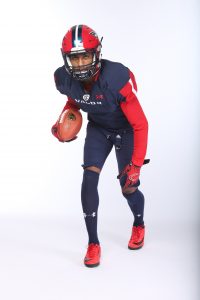 HelmetCam helps put the fan right on the field.

“The challenge of miniaturizing components,” Eisenberg explains, “is completely at odds with the challenge of moving data and streaming: typically, to solve a technical challenge — like needing to move something faster in a more robust fashion — you just add more infrastructure, more technology. It was a unique intersection of challenges where it needs to be as robust as much larger streaming platforms but it needs to be extremely small.”

Solving the problem of interference was the next challenge. It’s hard to think of more-congested air space than an arena, with thousands of people using their phones for social-media posts and calls. ActionStreamer needs to transmit video in a place where people often can’t even send a text. Its solution is, first, to use redundant transmission methods. Next, its patented delivery method makes the most efficient use of the bandwidth it’s able to get. It treats all bandwidth as a single chunk, as if it’s all part of one coordinated network: if one unit is struggling and another is fine, the stronger area takes over for the weaker. Some of this is done automatically, some manually by technicians on the sidelines.

The last issue is image stabilization. Although POV video sounds like a great idea, the reality is that the video from an active player is too jerky to enjoy. ActionStreamer’s solution is part hardware, part software. The HelmetCam has embedded gyroscopes that transmit movement information along with the video. Proprietary software removes a little of the head shake from the final video. It doesn’t smooth the video, since that would smooth on-field elements that have nothing to do with the wearer’s movement. Instead, it smooths the head and creates a more watchable but still authentic image without over-correcting the video.

Once the HelmetCam transmits a live video feed, it takes a small production team to get that stream to viewers. Producers can turn cameras on and off and decide which cameras to stream live, or they can grab video from non-live cameras for instant replays.

For Monumental Sports Network, the HelmetCam is a great way to get viewers closer to the action. It signed a deal with ActionStreamer a year ago to put cameras on coaches and refs. This was the next logical step. Online viewers can choose they angle they want to see and can call up replays using any camera. 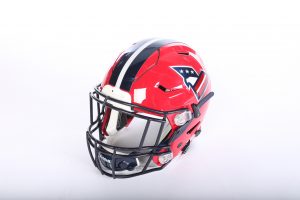 ActionStreamer technology uses image stabilization to deliver a clear but authentic view of the action.

“Fans are excited,” says Zach Leonsis, GM, Monumental Sports Network. “It’s a unique opportunity for us to truly empower our viewers to choose from unique perspectives. In particular, it has led to tremendous engagement on our mobile apps via our multicam functionality.”

ActionStreamer has been talking to representatives from various sports, including car racing and tennis, about where to take this, but Eisenberg thinks baseball and hockey will be the next sports to get player-worn cameras.

“Baseball has a ton of different head gear: player hats, batting helmets, catcher masks, catcher helmets, umpire masks. First- and third-base coaches wear different types of helmets,” Eisenberg notes. “In most sports, it’s really just one piece of headgear that the player wears throughout the game. In baseball, there’s a lot of different opportunities, so we’re excited to integrate some cool new perspectives around baseball.”