Systems must contend with ambient noise levels of 156 dB

The FIFA World Cup matches that culminate in the Final on Sunday at Moscow’s Luzhniki Stadium will be a test of man vs. magnet. The magnet in the rear of a loudspeaker, that is. The ambient noise level inside the venue is expected to reach 156 dB, an SPL value that can literally excite the surrounding air and lower the ambient temperature by 15 degrees C.

That’s what McCauley Sound had to contend with to win the FIFA contract to put new PA systems into five of the 11 Russian stadiums designated for the event’s 64 matches, including Luzhniki Stadium, Russia’s national stadium and host to the 1980 Summer Olympics, the 1999 UEFA Cup Final, and the 2008 Champions League Final. 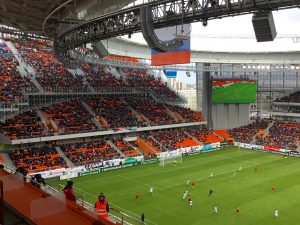 “We’ve never had to face any requirements as strict as those from FIFA,” says Evguni Samochine (aka “Sam Ocean”), a partner and executive director at McCauley Sound, which had designed PA systems for FIFA in Japan and Korea, as well as for the 2004 Athens Olympics Opening Ceremony. “They needed the system to be able to output 4 dB above that, taking it to 160 dB, which was more than any FIFA requirement we had encountered before. And it had to meet their strict requirements for speech intelligibility. It was a very, very big challenge.”

As was the fact that FIFA wanted to avoid spending for subwoofers, compelling McCauley to develop an entirely new dual–voice-coil 12-in. low-frequency driver, so that the music elements of the games were fully covered.

The Luzhniki venue, which seats 81,000, was fitted with 216 ILA412 loudspeakers powered by 86 RAM amps. The other four stadiums in McCauley’s portfolio for the games — located in Samara, Saransk, Rostov on Don, and Kaliningrad and ranging from 35,000 to 45,000 seats — used 128-214 of those speakers, hung in arrays distributed around the circular and oval tops of the stadiums.

The ILA412 is a large-format, three-way, axisymmetric line-array system, featuring four manifold-loaded 12-in. low-mid drivers, four 8-in. cone mids, and six 1-in. exit compression drivers on an 80° x 10° slot-loaded waveguide. It’s based on McCauley’s MLA3-2i compact dual-12 box with two 8-in. mids and a single 1-in. compression driver on a 90° x 10° horn.

Weather can be a challenge anywhere in Russia at any time. Samochine says the system also had to be weatherized and able to be easily serviced. Video of the installation can be seen here:

“It was a huge project, and we had to figure out a lot of things as we went along,” he says. “But it’s a permanent installation. It’ll be there the next time they need it.”

The World Cup was a boon to live-sound–systems developers globally. Italian PA manufacturer Noselli has systems in four of the nearly one dozen venues the matches were played in. The 35,000-seat Ekaterinburg Stadium, which opened in 1957 and underwent a major redevelopment completed in 2011, got a new Noselli Stadia system ahead of the games this year, installed by CROC. A total of 223 loudspeaker enclosures were deployed throughout the stadium in three models — the 100-10, 100-20, and 100-30, providing a choice of vertical-dispersion characteristics — along with 48 Outline ST SUB low-frequency modules. Fifty-four Vegas 24 ultra-compact enclosures are used to cover the VIP and guest zones. More than 300 individual channels of Outline amplification provide a combined total power of more than 1 million watts. The Kazan Arena also has an Outline system, installed in 2013. A combination of Outline Spectra II and Tripla II (using 24 and 48 units, respectively) are powered by 31 Outline T Nine amplifiers, all connected to five Outline Genius M412 matrices.

A total of 31 countries vied for the World Cup this year, and 30 of them were bound to be disappointed come Monday morning. But at least no one can say they didn’t hear it coming.