Live From Wimbledon: AELTC’S Alex Willis on the Growing Role of Digital

New ways of distribution target a wide variety of fans

The Wimbledon Tennis Championships is an event steeped in traditions both on the courts and off. But, in an age when media distribution extends beyond linear TV, Alexandra Willis, head of communications, content, and digital, All England Lawn Tennis Club (AELTC), and her team find themselves re-evaluating how to leverage those traditions in new ways and on new platforms that can best reach current fans and find new ones. 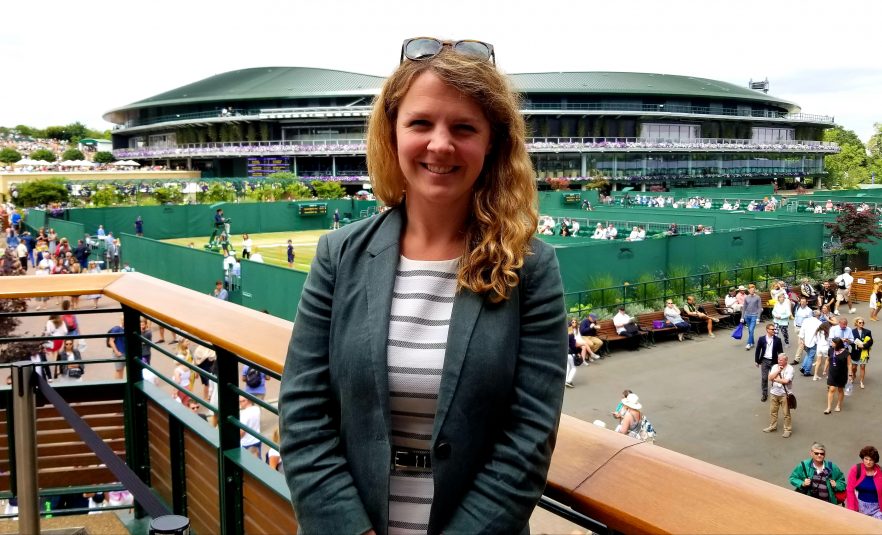 Alex Willis oversees a digital team that helps old and new fans engage with the Wimbledon event in new ways.

“There are different reasons people are interested in Wimbledon,” says Willis. “Some are interested because they are really big tennis fans through and through and they know the game inside out. For others, maybe they have just heard of Roger Federer and all they want to do is watch drop shots. So we have this breadth and have to adapt it not only to different countries but also to the level of interest.”

The digital team oversees the Wimbledon website, an Apple TV app that allows AELTC to dip its toe into the world of OTT, and all of the social-media platforms, including Facebook, Twitter, Instagram, Snapchat, Pinterest, and even Giphy.com. The team has dedicated personnel for each platform, a step that helps prevent confusion concerning what content might have already been published on the platform and also ensures that what content is best-4suited for each platform.

“You have to avoid the temptation to create one piece of content and then put it on all the platforms,” says Willis. “We have an external face to the world which exists through a combination of platforms, and we have to choose to put content on those platforms that we are proud of and are worthy of Wimbledon.”

The digital efforts for Wimbledon ramped up a week ahead of the qualifying matches as temporary staffers joined the full-time team to create a team comprising 30 members plus an additional 10 who create content for social-media channels in Japan, China, Korea, India, and Thailand. The qualifying week is no longer a test period but, rather, a chance to give fans an opportunity to become even more invested in the tournament.

“The thing this year that has been absolutely transformational for the digital team is access to all of the court feeds and cameras as Tom [Giles, broadcast technical manager, AELTC] has worked really hard to not just serve the broadcasters but also our own internal needs,” says Willis. “And that means that our social and digital output is much more integrated than it has been.”

She adds that, in 2011, the club began to take a look at how to take its digital operations, including the look and feel of its website, to a new level.

“We spent quite a lot of time saying what makes for a good website, and the number-one thing is live streaming; that is what sports fans want,” she explains. “Because of our broadcast rights, we can’t stream continuously live, but we can create something else that is complementary and that people will want to watch.”

That something else is the Wimbledon Channel, an offering that features reporters and ENG crews roaming the grounds and reporting from different locations. Previously, it was anchored to a studio on the roof of the Wimbledon broadcast center, but, this year, the focus was wherever the production team felt inspired.

“We could show off the grounds and go to different locations, from the Wimbledon [ticket] queue in the morning to Henman Hill or the other end of the grounds,” says Willis.

The Wimbledon Channel did offer a small bit of match coverage, having rights to show one game per match per hour. And distribution deals have been done in every country except Italy, Germany, Spain, and Austria.

“We take the best of what the Wimbledon Channel does in live streaming and put it into Facebook or the Twitter timeline,” says Willis. “That gives social interaction and comments, and we are trying to give people the choice to engage wherever and whenever they can.”

One example of the role digital played in creating a unique production was a 15-minute interview with Drew Feustel, a U.S. astronaut currently in the International Space Station. Feustel attended Wimbledon last year, and the idea was floated of having him take something from Wimbledon with him to the Space Station. Special coins were minted (the ones sent to the Station will be used at next year’s tournament for coin flips), sent to NASA in Houston, and then to the Space Station with Feustel.

“We were talking to his wife, and she mentioned that NASA does live events and that we should apply to do one,” says Willis. “It was so cool because you have Drew wearing a Wimbledon T-shirt with coins flying around him, and, even though there was a delay, you could see him reacting to the questions. It was pretty fascinating.”

The use of IBM Watson continues to evolve at Wimbledon, with the digital team putting it to use in a meaningful way. Last year, Watson analyzed player movement, match data, and crowd noise to create 90-second highlights packages from the six main courts within minutes of the end of the match. This year, the technology took another step forward.

“The great thing is,” says Willis, “the IBM sports team has been working with the Watson team to make the products fit the purpose.”

For the AELTC highlights-editing team, use of IBM Augmented Intelligence greatly increased the ability to quickly turn around highlights and find the right shots. “It allows the content team to worry about one less thing,” she says.

Other digital features included NextVR’s being onsite for the second year, creating highlights for virtual-reality users. A 360-degree camera was also placed at the practice courts.

“It’s a big open space that has true 360-degrees of coverage,” notes Willis.

And augmented reality also played a role, although it was more of a proof of concept. “Users could celebrate the history in an interesting way by using AR to play highlights over plaques,” she adds. “It shows how you can add to someone’s experience.”

It’s also an example of one of the key goals for the AELTC team.

“People have Wimbledon on their bucket list, but not everyone is going to get here. So how can we make them feel like they are here,” says Willis. “As much as we try to make this experience perfect, that is important.”