Mani Hammond, a monitor class engineer for singer/songwriter Vance Joy, has deployed a DiGiCo SD10 and other audio equipment for the artist’s career. In addition, the Imperial Theater installed DiGiCo SD 12 consoles along with their building restoration. 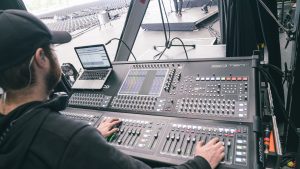 DiGiCo SD10 give Vance Joy Consistently Good Sound
Mani started his career on analog desks, but when he made the move to digital and a DiGiCo SD9, he found the transition an easy one and when Encore purchased an SD10 two years ago, Mani decided to give it a try. He has found it the perfect console for the job, citing the high fader count as one of its major benefits and has been touring it with Vance ever since.

“I like having lots of faders as I don’t like changing banks,” he says. “Having 32 faders in front of you makes everything easily accessible.”

Mani is running 12 channels of in ears and is using the onboard reverbs and just a few Waves plugins, liking to keep things as simple as possible. He has up to 52 channels of inputs including drums, bass, acoustic and electric guitar, Keys, and a horns section, with the inclusion of a B stage increasing the channel count slightly.

“We are carrying most of the PA throughout the tour and we’ve managed to take the control package everywhere with us, which has given us great consistency and, because we’re running on Optocore now, we also have total redundancy,” says Mani. “It has been very solid, and the sound quality is fantastic.”

Mani admits he does not use the SD10 to its full extent, ignoring functions such as Snapshots because the band likes to make every night unique and because Mani prefers to mix freehand.

“There are many powerful features to this desk I am not taking full advantage of. The on-screen Aux to Fader mode has been great, however, making it really easy to change multiple mixes simultaneously while never losing focus on the main mix.”

As Vance uses several acoustic guitars and ukuleles, being able to recall EQ pre-sets has been really useful.

“The sound of the guitars changes according to how well-used its strings are, as well as the temperature and humidity of the room, so I have a bunch of EQs set up for various situations — fresh strings / worn strings / hot or cold temperature,” Mani continues. “Also, Vance’s guitar playing can go from delicate finger picking to strumming pretty hard very quickly throughout the set. It’s really dynamic, so the Dynamic EQ and Dynamic Comps have been extremely useful in getting these peaks under control.”

Mani is also making use of a DiGiGrid MGB interface to record the show onto his laptop using the input switch function, which allows him to do virtual soundchecks.

“Again, because the acoustic guitars can change so dramatically with all the temperature and dynamic variables, it’s been hugely useful to being able to change settings on the SD10 via virtual soundchecks without needing Vance on stage any longer than he needs to be,” Mani adds. 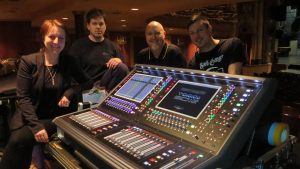 DiGiCo SD12s Deliver Mixing Without Limitation to Canada’s Imperial Theater
Built over a century ago, the Imperial Theater in the Canadian city of Saint Johns, New Brunswick has played host to many a legendary show. In the mid-1980s, a huge restoration project took place, bringing the theater back to its original glory. With its incredible history and unique design, the Imperial Theater still enjoys a busy schedule with music, film, and theater shows filling its diary. It has recently taken delivery of two DiGiCo SD12, consoles that are not only right for the venue, but also for the string of visiting engineers needing a versatile mixing desk that allows them to set up shows quickly and easily.

“We looked at a lot of consoles from a lot of different manufacturers. They each had things we liked and didn’t like,” explains the theater’s head of sound, Sean Boyer. “Time again, the SD12 bubbled to the top of our conversations because of its small footprint, flexibility, world-class preamps, expandability, and its lightweight, trust me, that was a consideration. Our previous consoles would take four people to back up and move, but the SD12 can be set up by two people without strain. We constantly see DiGiCo at the top of the list for asks on riders, and engineers we had spoken with over the months couldn’t sing their praises highly enough! Once I got my hands on one during a demo, I was sold on it!”

Once funding became available, it was clear that the SD12 was only one option for the theater. With an already installed Meyer Sound system, the DiGiCo SD12 was the perfect marriage.

Danny Legendre of DiGiCo’s Canadian distributor, Gerr Audio, who supplied the console, provided on-site training although, as Sean recalls, the team already had the system up and running prior to his arrival.

“As we had already had the SD12s up and running flawlessly, Danny’s time was spent providing training to the secondary operators,” he says. “At the start, they found the training a little daunting; the StealthCore2 software is so flexible and powerful and worlds apart from what they had been used to mixing on. But as time went on, you could see their eyes light up every time a new concept sunk in and they’ve been having fun getting to know the consoles ever since.”

Base system templates have been created for the SD12; one each for FOH and monitors, including default channels, patch assignments, and system options. Each engineer that works on the console can have their own default file, and just walk in with a thumb drive and be ready to go. Additionally, show files can be built using the off-line software, provided by DiGiCo at no extra cost, allowing Sean to sit in his office with his riders in front of him and build the show.

“This means I can have everything ready weeks before the performer(s) walk into the building,” he smiles. “They are constantly impressed with how prepared we are for them. That’s just one of the many benefits the consoles have given us.”

Whilst the in-house engineers have been using and loving the consoles, visiting engineers are just as excited about the SD12, many of them have worked with other consoles in the DiGiCo range.

“The beauty is, they can arrive with their show files for another SD Range mixer, and in two minutes we can convert it to run on the SD12,” says Sean. “We have even had a ‘celeb’ engineer, Stan Doty (Wilco), use the board and we were able to add to his stack of SD show files he carries on his thumb drive.

“I couldn’t be any more pleased with our decision. I had a few small bumps along the way, but Dany was always just a phone call or an email away, and immediately provided answers for the issues, which were, I hate to admit, operator error.

“Since the SD12s were installed, we have had nothing but wonderful feedback from acts and audience alike about how fantastic everything sounds. I feel exceptionally comfortable sitting in front of the desk. It gives me all the power I need to achieve my vision, without stressing about running out of headroom, not having enough EQs or compressors or, God forbid, hearing the AD/DA. The consoles are very conducive to executing an artistic vision, rather than working around limitations.”