Live From The Open Championship: 198 Cameras Keep CTV OB on the Move; RF Support Gets a Lift

The Open Championship continues to grow in both scale and scope for all involved. This year, the number of cameras jumped from 175 to 198, the number of EVS replay servers climbed to 37, and the event has even made some history with the first appearance of UHD and HDR golf coverage at an Open.

“Last year, when we were at 175, I thought we would reduce it, but we never seem to,” says CTV OB CEO Hamish Greig. His company provides the vast majority of technical support for The Open. 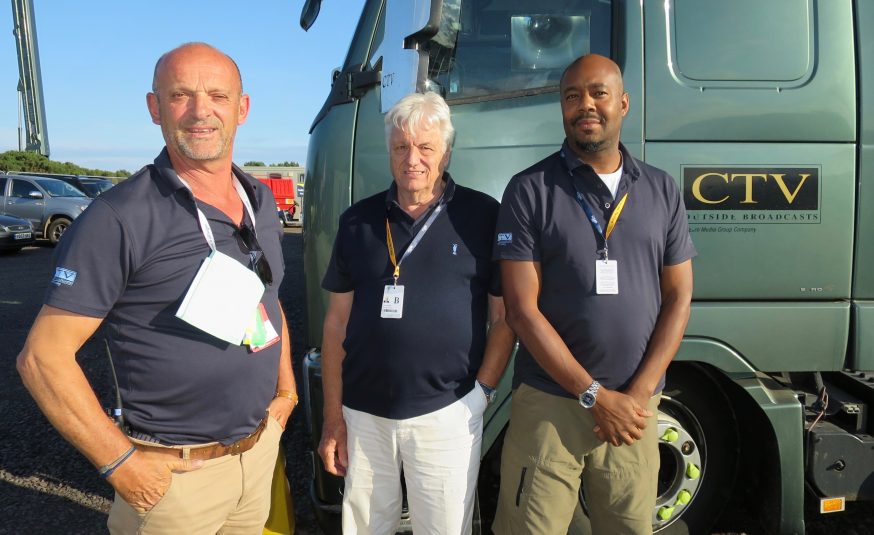 CTV OB CTO Paul Francis opines that continual expansion is simply a result of clients’ discovering new technologies and innovations at trade shows or through media reports and deciding to try them out at The Open.

“And a new technology usually doesn’t knock out another innovation,” he adds.

CTV OB finds itself with more clients as well as more technology. R&A productions provided by IMG has been added to a mix that comprises European Tour Productions, Sky UK, NBC Sports, BBC, and TV Asahi.

“It’s a machine,” says Greig, “and we work to fine-tune it every year.” Elements like Virtual Eye and Toptracer, for example, are given dedicated production areas this year.

“One of the major areas which has changed and which I am most proud of,” he adds, “is what we have achieved on the RF side — on the video side but, more important, on the audio side.”

For example, Ian Smith, head of sound, CTV OB, says that, with four microphone receive sites and the duplex talk-back systems transmitting from two locations on this course, the power can be turned down. That helps improve the harmonics and makes it easier to work with. And, with the 72 base stations split over six systems that have 12 base stations each, the rightsholders could be set up as they rolled in rather than having to all be set up at once.

Adds Greig, “With RF over fiber systems and the facility’s two or three low-power sites, if there is a problem, we can still provide service. Before, we would lose everything.”

A receive site at the practice range provides another level of redundancy in case the cranes that play such a crucial role in signal transmission need to come down because of high winds.

The camera complement includes an iMovix X10; three Inertia Unlimited X-Mos; and 73 Sony HDC-1500 cameras, 43 HDC-2500 cameras, 21 HDC-4300 cameras (three in high speed, the other 18 dedicated to operating in UHD HDR mode), 16 P1 cameras, one F5, and four PTZ cameras. ACS is providing nine bunker cams, a wire cam, a rail cam with a Sony P43, and the jib cameras. Twenty-three Sony Z450 cameras are for ENG use and are part of the 25 cameras relying on RF transmission. All the other cameras are hard-wired.

Housing six two-person teams ,the super-iso room is one of the most important areas in the compound, ensuring that the main production gallery doesn’t miss a shot on any of the 18 greens. The super-iso team also keeps an eye on the majority of the players on the course so that the main production gallery can zero in on those at the top of the leaderboard.

Next door to the super-iso/replay area is the main replay-submix area, where two directors and four EVS operators create features and additional replay packages via four EVS XT3 replay servers. The teams in both iso-relay areas work hard to ensure that all the storylines on the course are covered properly.

The third component in the broadcast center, the main production gallery features a Grass Valley Kayenne production switcher with 5M/E and 10 DPMs.

Telegenic’s T23 unit is racking 24 cameras, and the EVS area is used by ACS for robotic cameras and rail cams. The production area of that truck handles augmented-reality elements like Virtual Eye and ChyronHego for world feeds. The audio area is home to the communications hub, because it was able to be set up onsite the Saturday prior to the tournament. BBC highlights are housed in OB14 and MVT3 and the production area of TSV6. TV Asahi, meanwhile, calls a unit from TVM home.

Many of NBC’s needs are met in OB9, a truck that is working its first event following an upgrade to UHD and Dolby Atmos audio.

“It’s quite a big job for it to be birthed on,” says Greig. “It is also the main comms hub for NBC and the NBC effects submix. The second production areas is used for three robotic cameras by the Golf Channel. We also use it for the media-management side of [EVS] IPDirector for the Golf Channel and XDCAM playback to Orlando.”

There are also portacabins in use for overflow of RF and video shading, and CTV’s RATs (remote antenna towers) mobile unit is onsite with two production areas for commentary.

MST Systems is on hand in a cabin for scoring graphics for Sky Sports and the world feed where teams make use of both ChyronHego and Vizrt graphics systems.

An Abundance of Studios
Several broadcasters have studios onsite. NBC and Golf Channel each have one along the 18th fairway (Golf Channel downstairs, NBC upstairs). There are also a third NBC set for host Mike Tirico, a Sky UK studio along the 17th fairway (offering a view of the famous Barry Burn in the background), a second Sky UK stage for The Open Zone (at the practice range), a BBC set near the putting green and mix zone, and a number of other commentary positions.

“Significantly, the logistics have improved,” notes Francis. “You cannot underestimate what it takes to get all this kit, people, and facilities down a single-track road. We rearranged the way trucks are parked for loading and unloading and involved the operations team more. By taking things off the truck in an order, we aren’t moving flight cases around unnecessarily.”

An Outside Source Central Apparatus Room (or OSCAR) houses much of the technical equipment that supports the production area. This year, graphics support was moved into the OSCAR, a move that Francis says saves a lot of cable.

“We are always looking to reduce the amount of cable in the compound,” he explains. “One way is to also aggregate the data between the trucks. We now have managed switches to fan out data to the outer-lying trucks, and we manage what is going on rather than dealing with hundreds of Cat 5 cables running to other locations. We have also increased the amount of 10-Gbps connectivity to more places around the compound so that others are benefiting from the high-speed connectivity as much as possible.”