With its handheld doc-style camerawork, voice-over narration, and quirky humor, Arrested Development revolutionized the television sitcom look. Created by Mitchell Hurwitz with Ron Howard serving as one of its executive producers, the ½ hour comedy series follows the Bluth family, a once rich SoCal family that continues to live above its means. At the center of the family is Michael Bluth (Jason Bateman), who does his best to keep his dysfunctional family intact. The series aired for three seasons on the Fox TV network for three seasons (2003-2006) but was canceled due to low ratings. In 2013, Netflix brought the series back to life with its fourth season. In May 2018, the fifth season began streaming, shot by cinematographer Patrick Stewart with VariCam LT cinema cameras. 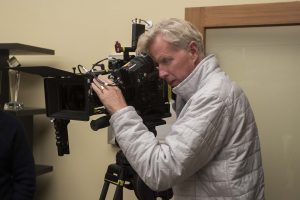 When hired for Arrested Development, the first request Stewart approached Hurwitz with was to add a third camera. Shooting with three cameras with multiple characters can be a logistical challenge, but Stewart felt he could get through scenes more quickly, and effectively, in order to get the actors out on time. “I call the C-camera the center camera and the A and the B are screen left and screen right,” Stewart explains. “C covers the center P.O.V., while A and B cover the scene from their left and right side P.O.V., which usually starts with overs. As we continue to shoot the scene, each camera will get tighter and tighter. If there are 3 or more actors in the scene, C will get tighter on whoever is in the center. After that, C camera might cover the scene following the dialogue with ‘swinging’ singles. If no swinging singles are appropriate then the center camera can move over and help out coverage on the right or left side.

“I’m on walkie — either adjusting the shots during a scene for either of their framing or exposure, or I’m planning ahead,” he continues. “You give me three cameras and I’ll shoot a show really well for you and get it done efficiently, and with cinematic style.”

Because it is primarily a handheld show, Stewart needed lenses that would not weigh down his operators during long takes. He employed Fujinon Cabrio zooms (15-35mm, 19-90mm, and 85- 300mm), which are all f/2.8 lenses.

For camera settings, Stewart captures 10-bit 422 UHD (3840×2160) AVC Intra files at 23.98-fps. He also captures in V-Log but uses the V-709 LUT. “To me, you can create all the LUTs you want,” says Stewart, “but more than likely you get to color correction and end up changing things. I think the basic 709 LUT is really nice and gentle on all the colors.” Light from Above

Much of Arrested Development is shot on stage, so lighting can get complicated, especially when there are multiple characters in a scene. To makes things less complicated, Stewart provided a gentle soft light from softboxes covering the top of each stage set, using 4 by 8 wooden frames with Tungsten-balanced Quasar tubes dimmed down to 50%. His motivated lighting explanation is that the unseen source could basically be a skylight. If characters are close to windows, he uses HMIs creating “natural sunlight” punching through to light the scene. “The nice thing about the VariCam is that you don’t need as many photons and I did pretty extensive tests during pre production on how to do it,” explains Stewart. 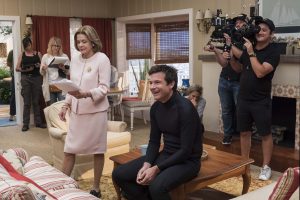 On stage, Stewart sets his ISO to 5000 base and dials down to 2500 and generally shoots at an f/2.8 and ½. He even uses one level of ND on top of that. “You can imagine 27-foot candles at one level of ND at a 2.8 and 1/2 – that’s a pretty sensitive camera and I noticed very little noise. My biggest concern was mid-tones, so I did a lot of testing – shooting at 5000, shooting at 2500, 800, 800 pushed up to 1600, and 2500. Sometimes with certain cameras, you can develop this mid-tone noise that you don’t really notice until you’re in post. I felt like shooting at 5000 knocked down to 2500 was giving me the benefit of lighting the stage at these beautifully low-lit levels where we would never be hot. I could also easily put 5Ks outside the windows to have enough sunlight to make it look like it’s overexposed a bit. I felt that the 5000 base knocked down to 2500, the noise level was negligible. At native 5000 ISO, there was a little bit more mid-tone noise, even though it was still acceptable. For daytime exteriors, we usually shot at ISO 800, dialing down to 500 or below.”

Stewart and Arrested Development director Troy Miller have known for many years since working together on the HBO series, Flight of the Conchords. “There was a shorthand between Director and DP that really came in handy,” says Stewart. “Troy knows that I know what I’m doing, and I know on his end that he’s trying to figure out this really complicated script and have us shoot it. Hand in hand, we were really able to support Mitch.”