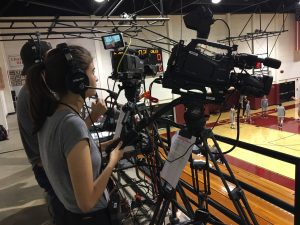 The intercom system is a key part of the production workflow that supports the curriculum at Dodge College of Film and Media Arts. “Our goal for our TV Studio is to provide an experience as close as possible to what our students will find when working in the ‘real world.’ Our equipment, especially with recent upgrades, does just that and in some cases is exactly what they will find at professional facilities,” says Steve Hirsen, Assistant Professor of Television Writing and Production at Chapman University.

“We’ve relied on the Clear-Com Eclipse since we opened in 2006, and now with our Eclipse HX system, our communications capabilities are significantly stronger,” says David Goedhart, Television Studio Engineer, Dodge College of Film and Media Arts at Chapman University.

The existing Eclipse matrix frame was refurbished and upgraded to Eclipse HX for increased operational speed and features. This upgrade gave Goedhart the ability to add the Clear-Com’s IVC-32-HX Ethernet/IP card to significantly expanding the college’s communications capabilities with IP-enabled user devices such as V-Series keypanels and the Agent-IC mobile app.

“We produce live broadcasts of university sporting events utilizing co-location, with no production truck at the field,” explains Goedhart. “Fiber connects the venues to the film school’s television control room two miles away. We use Clear-Com’s IVC-32-HX IP card in the Eclipse matrix and an LQ-R2W4-4W4 to connect beltpacks, IFBs, and line level audio feeds at the venues. We also have Agent-IC licenses which allow any smart phone to become an intercom device. A reporter or crewmember can be anywhere in the world with internet access and be able to communicate with our control room.”

To complete the buildout of the system, FreeSpeak II wireless intercom beltpacks and two pairs of transceiver modules (one fiber connected to the sports venue and one for the film school) were added to the system. “No matter what type of show we need to produce, narrative, news, sports, or documentary, we can use the same wireless beltpack hardware in any location. When a student turns on their wireless beltpack, they simply select the configuration for their job and they are ready to go. The FreeSpeak II wireless system is fantastic,” states Goedhart.

In addition to the Eclipse HX system, Clear-Com’s E-MADI64 card was installed for up to 64 bidirectional channels to any AES10 compatible device. For Goedhart, that’s their Calrec audio board. “Now we have IFB with unique mix-minus and return audio, allowing the producer to monitor individual mics, as well as being able to listen to any audio source in the console over the intercom. We can also embed director’s audio into our recordings so they can build their reel,” he said.

“We produce the only live newscast in Orange County,” says Goedhart, “It’s 100-percent student run with IFB, FreeSpeak II wireless beltpacks, various V-Series keypanels, IP linking, Agent-IC mobile clients, and two live reporters on-scene — all to give the students a ‘real-life’ environment to prepare them for their professional careers once they graduate.”

That professional environment can also be experienced during sporting events. During football games, there is a live studio show in addition to the game broadcast, with 13 cameras, a crew of 28 students, and 14 additional intercom users connected using traditional analog telephone lines and cellphones. All of this hard work by the students is available to residents of greater Los Angeles as all content airs on cable, Facebook, and YouTube.