The three control rooms offer both linear and digital productions

With the impending launch of the ACC Network in 2019, multiple schools within the conference are gearing up for the transition and Duke University is at the forefront of those efforts. In order to withstand the increase of events and content production that the ACC Network will demand, the Blue Devil Network has constructed an impressive setup in the Blue Devil Tower — a new media box spanning 110,000 square feet in Wallace Wade Stadium. 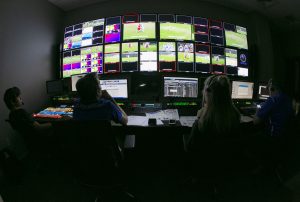 Behind the scenes at Blue Devil Tower with the Blue Devil Sports Network.

“The first 6 to 8 months were very stressful with a lot of late nights,” says Chad Lampman, Executive Director, Blue Devil Network. “Now, it’s nice to be able to sit back, listen to everyone else that’s going through it, and know we’ve already done it.”

Looking back on his time at Duke, the refurbishment of the Blue Devil Network setup is a far cry from what he had at the beginning. “When I came here from Clemson in 2010, I was a party of one,” he says. “My office was a cleaned-out storage closet in the bowels of Cameron Indoor Stadium.”

After upgrading the university’s first control room from analog to digital after his first year, Lampman and his team purchased a trailer to begin live event broadcasts for ESPN3 in 2013.
As the crew grew to 12 full-time, non-student employees, the Blue Devil Network made the decision to construct the new facility the following year. Showing plenty of foresight as to what’s to come, Lampman and Vice President/Director of Athletics Dr. Kevin White installed a campus-wide, fiber connected infrastructure for future growth.

“I had a feeling that this [ACC] Network was going to start,” he says. “While we had the ground dug up, we went ahead and laid fiber back to this control room.”

Productions from the Trailer
As construction was underway in Durham, the Blue Devil Network needed to revert back to full-length, live productions in a trailer. Although the team had experience producing live events from the trailer with ESPN3, Lampman believes this was one of the toughest challenges of the transition. “The biggest challenge I think was being able to continue the high-quality production we were doing while building a control site,” he says. “Picking which events we can do in a day while multiple things were going on was difficult.”

After nearly two years of construction, the three control rooms were up in running for the football season in Fall of 2016. After having a relationship with ESPN3 in the past, Duke produced two successful lacrosse games that gave Lampman reassurance that his program, and the facility, were ready for the hefty workload of the ACC Network.

“We wanted to show ESPN that our control room is ready for the linear launch of the ACC Network in 2019,” he says. “It was also good for everyone to see how a true production with a full staff can run because this is what we’re working towards.” 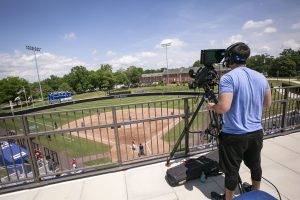 The ACC Baseball Tournament is just one of the events on the radar for BDN.

A Trio of Control Rooms
Currently, the three-control room space allows two separate teams to produce two different styles of content. With two of the three dedicated to linear, the live production team has ample room to hone in on football, basketball, and other sporting events on campus. As for Lampman and his crew, the digital aspect of the network received a work area of their own to continue the successes in social media and on-demand content. Personal offices, editing suites, and a live studio are in house as well.

Moving Forward
The network produced over 220 live events in 2017-18, including the men’s basketball home opener on ESPN — the most watched school-produced event in the conference. The Blue Devil Network has become accustomed to their new digs by shooting 82 studio shows across the ACC Digital Network.

Just as Lampman did during the building of these new control rooms, his advice to programs who are looking to expand their current facility is to rely on those that have done it before. “I reached out to my SEC brethren and saw how they did things. We’re lucky enough here in the ACC where we’re a tight group so we’re always talking,” says Lampman.

Now with almost two full years with the new setup under their belt, Duke and the Blue Devil Network are looking to broaden their outreach both inside and outside of the network by allowing others to rent the facility such as Fox Sports RSNs for the ACC Baseball tournament and high school programs. Although this could be a potential option for the institution, the university is reaching for new heights in 2019 with the ACC Network taking the lead.

“It’s nice to say ‘Hey, we did this for a reason,’” says Lampman. “These control rooms were built with that idea in mind.”

The ACC Network has a tentative launch date of August 2019.