Cybersecurity, content protection were the focus of a workshop

At the 12th-annual Sports Content Management & Storage (SCMS) Forum, a wide range of media-asset–management (MAM) leaders representing major broadcasters, leagues, teams, OTT outlets, and vendors took to the stage to give first-hand perspectives and behind-the-curtain looks at their respective workflows. More than 300 attendees traveled to the Westin New York at Times Square yesterday to learn about the latest in MAM workflows and content-storage technologies. 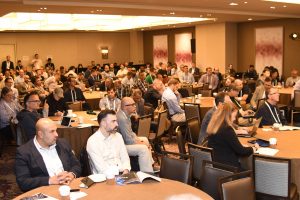 This year’s expanded program also featured a Cybersecurity and Content Protection Workshop, which aimed to provide attendees with insight into how to better protect their facilities and prevent online piracy.

The day-long Forum opened with a panel discussion on Cost Reduction vs. Revenue Generation, moderated by this year’s SCMS Committee Chairman Mark Haden, VP, engineering and IT, MLB Network.

Reflecting on the importance of events like the SCMS Forum and the conversations they provoke, Haden said, “I have noticed one consistent theme in virtually all SVG events since its inception: change. Each year, we see technical innovation that drives change. These changes enable us, as technologists, to improve our workflows and the speed in which our stories can be told with a rich supply of content and statistical data.

“How we capture, curate, catalog, reference via metadata, edit, and publish our content is changing as well,” he continued. “Our vendors continue to push the envelope, and this forum spotlights emerging technology on every panel. Our goal is to show how technologies such as AI, machine learning, object storage, large-scale remote MAM deployments, virtualization, and cloud infrastructure apply to real-life situations. Rather than see what these technologies can do, we will find out what they are doing.”

“We’ve been in our current space for about 15 years, and it’s been upgrade, upgrade, upgrade,” he noted. “We’re still doing that right now, but looking ahead to 2021 and the Inglewood stadium facility — to steal a line from [Avid Sales Director, Sports, North America] Doug Price — it’s more of a ‘brownfield’ opportunity, rather than a greenfield opportunity, because we don’t even know what the field is going to look like quite yet. We still have a couple years to do a lot of fact-finding and figure out how we see current state-of-the-art systems and how we want to push all those things further.

“Whether it’s storage, NLE platform, operating system, MAM,” he continued, “all those things are on the table as far as conversations go, and it’s put us in a great position to start figuring those things out.”

Organizations must also create an efficient tiered-storage strategy while maintaining reasonable availability expectations for producers. With a little under a year to go until the ACC Network launches, ACC Associate Commissioner, Advanced Media, Scott McBurney weighed in on the challenges of building a MAM system that addresses the needs of every conference member institution — in particular, producers who want to be able to access to any piece of content at any time.

“The challenge is the ‘save everything’ philosophy, as much as I’m a believer in saving everything,” said McBurney. “It is, I think, the significant part of what this potential MAM will be for us. Our schools that make up the ACC are producing a large amount of live content throughout the course of the academic/athletic year, and so being able to share that footage quickly would be the key. It’s not so much long-term storage; it’s going to be some sort of defined amount of storage built with the intent that the schools can manage that and then they’ll basically be able to clean out what they don’t need.

“It’s potentially designed to be, if you have a live event and you want to share it with Clemson or Boston College, you’re able to get that footage immediately and not have to go through multiple layers,” he continued. “Immediacy will be the key for us, and not too many layers to work through to get that content.”

For Vox Media, the additional challenge is working with, and gaining the trust of, its networks that may want to have their content immediately accessible on a storage area network (SAN) rather than a deeper archive, despite the ability to call content out of the archive and free up valuable SAN space. Sarah Semlear, director of post production and video operations, discussed this process while also shedding light on company’s efforts to build a new MAM system.

“One of the biggest things for us is, in order for us to archive something, we need to know that it’s on the SAN in the first place,” she said. “With the OTT networks, some of them [believe they] need to keep all of their content on the SAN all at one time, and we don’t have the space for that. It’s been a little bit of a struggle getting them to trust us that it will come back. With the other networks that are mostly digital, we haven’t really faced this issue in the same way; they also grew up with us and understand the company and know we’re not just caching their content. OTT is a little bit newer, and we’re just kind of building that trust now.

“When the MAM is in place,” she continued, “those systems will be automated, and networks won’t necessarily know where their content is. They’ll just be able to access it.”

Panel discussions included The AI Factor: Automating Metadata Capture, Search, and More; Cloud, Virtualization, and SaaS: From Storage to Playout and Beyond; The Content Tsunami: Managing the Coming Wave of Unstructured Data; and Storage Tiering and DR Strategy: Smartly Preparing Your Content for the Future.