With 5.1 surround the default monitoring configuration for broadcast audio, remote-production environments are crowded with speakers, and immersive sound is threatening to make them even more so. But not tomorrow.

Builders of remote-production vehicles are aware of the imminence of immersive-audio formats, most notably Dolby’s Atmos in the U.S. But, thus far, only a few trucks have been outfitted to accommodate Atmos’s 5.1+4 speaker configuration, which requires an additional four speakers mounted in the ceiling above the A1 position.

The only field units that have been so outfitted and deployed are Game Creek’s Nitro and Nitro B, which are being used by Fox Sports for NHRA shows. Game Creek has also outfitted its 79 unit, used by ESPN, although the 5.1+4 speaker array has not yet been used for Atmos. Mobile TV Group’s 39 Flex unit is also Atmos-equipped, according to Dolby. In the UK, 10 Atmos-equipped production trucks are being operated by NEP, Telegenic, and others and have been used on English Premier Leagues broadcasts on Sky. 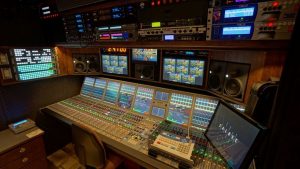 Game Creek’s Nitro, used by Fox Sports for NHRA coverage, is one of the first production trucks to deploy the 5.1+4 speaker configuration for Dolby Atmos.

“There have been some passing inquiries about [Atmos monitoring] but, aside from the NHRA, no hard requests,” says Paul Bonar, VP, engineering solutions, Game Creek. In fact, he adds, looking back at surround’s path from novelty to industry standard, he doesn’t see the same arc playing out for immersive.

Game Creek SVP, Technology, Jason Taubman agrees: “When 5.1 first came around, there was a lot of interest around it, in both discrete and simulated surround. We bought a lot of converters. ESPN was a very early backer of it, and then Fox Sports jumped in, and it moved quickly. I’m not sensing that same level of anticipation with Atmos.”

Overhead But Under the Radar

However, immersive audio may be having a bit of a stealth moment. Gerling and Associates President Fred Gerling says he was surprised to learn that a number of the custom-truck/trailer builder’s recent new projects, across its remote-production–provider and broadcast-network customers, have included at least provision for future implementation of ceiling speakers in the audio compartments. These take the form of an aluminum support bracket installed inside the ceiling and designed to hold four speakers that can be quickly installed and wired at some point in the future.

These installations are being requested by the end users, which suggests that broadcasters are preparing for an immersive future. 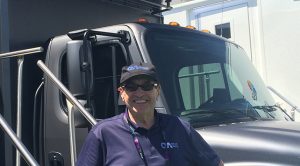 “The speakers themselves are not installed, but the unit is ready for them whenever the end user wants them,” Gerling explains, adding, “If this audio requirement becomes prevalent in the industry, we will eventually begin to integrate these bracket systems as the norm.”

(This development underscores a small but important new area in systems integration for trucks and trailers. Audio compartments are generally located at the rear of trailers and subject to occasionally rough rides, despite the trailers’ pneumatic air-ride suspension systems. The mounting bracket was chosen because of its light weight and ability to keep speakers firmly attached in a new — and often jostled — location in audio compartments. These are full-range speakers, larger than the more common flat surface-mount speakers used for communications audio, which are easier to secure in trailer ceilings.)

The anticipatory provisions also underscore the fact that awareness around immersive audio is beginning to migrate to a more nuts-and-bolts level, and that could begin to affect product choices. That’s illustrated by the use of Klipsch speakers for the Game Creek truck’s ceiling speaker arrays, rather than the Neumann KH series speakers used in the rest of the monitoring array and, Taubman says, typically the default choice for the overhead application: “The Neumanns were too deep to fit into the ceiling.”

The Atmos additions aboard the Nitro trucks suggest an evolution already in progress. For instance, at Fox Sports’ request, the rear left and right surround speakers were lowered from their usual standing-ear level to a sitting level, putting the entire 5.1 speaker array at the seated A1’s ear level and opening more propagation space for the ceiling array. That design has drawn positive reviews from A1s in the midst of the Atmos learning curve, says Bonar, by creating more distinct space around each speaker’s output.

“[Immersive audio has] been used in film and television [postproduction],” he says. “Broadcast is learning how to use it in live situations, when you don’t have the opportunity to go back and fix it in post. So how you monitor it is critical.”

“There are ideal positions, but, in mobile units, you have to compromise,” he explains. “You have to compete for space [in ceilings] with HVAC, for instance. Each truck is a bit different, so it has to be flexible.”

Immersive audio is also creating other challenges in the tight confines of remote-production environments. While mixing the show, A1s also have to listen for cues from the director and producer, each of whom has a hot mic, assignable to production speakers in the audio-control area; the four additional overhead speakers add to this aural onslaught. A1s have come up with custom solutions for this, such as placing small powered speakers on the floor angled upwards, with directionality helping create some more clarity, or using very tonally different speakers for that purpose. But, says Bonar, “It’s getting crowded in there. Some A1s are keeping a meter nearby to keep an eye on how the overall level of sound is creeping up in the room. It can be a problem.”

Taubman says providing for future technologies is simply part of the job when it comes to remote-production trucks, which are designed to last decades at a time when technology is changing faster than ever. Immersive audio is simply the latest of those disruptions. “Clients are also still working on how they want their audio monitors configured in relation to their video monitors [in the audio compartment],” he says. “There are a lot of pieces still being moved around, so adding more for immersive audio will complicate that. We’re constantly trying to prepare for the future.”