New software products are designed to fix the monitoring environment

When it comes to audio monitoring, the quality — or lack thereof — of the speakers themselves has always been the focus of listener compliments or complaints. However, over the past several years, the environments in which those speakers function have increasingly been considered in sonic evaluations.

A great speaker — based on reasonably objective criteria found in its spec sheet — can quickly become a mediocre one when placed in an especially challenging space. The audio compartment of a remote-production vehicle or trailer is the ultimate Petrie dish for this phenomenon, which becomes even more complex when audio mixes have to move among different spaces and through an assortment of speakers.

“I’m glad that people are finally starting to acknowledge that the speaker and the room it’s in are not disconnected from one another,” observes Peter Chaikin, director, recording and retail solutions, JBL brand, Harman Professional. 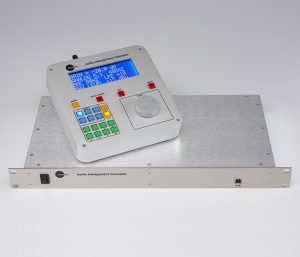 In response, speaker manufacturers have been developing and refining so-called room-correction systems: software that can aurally analyze a particular space’s metrics, such as its size and reflectivity, and adjust the performance of the speakers to that environment. JBL, Blue Sky, Genelec — all regularly present in broadcast-sports remote-production facilities — and other brands have developed these room-correction products.

Some began by focusing on LFE correction. For example, JBL’s Intonato 24 system works solely below 500 Hz, and Blue Sky’s Audio Management Controller (AMC) traces its beginnings to the company’s now discontinued Bass Management Controller. However, all are intended to optimize frequency response to the spaces they’re used in.

Blue Sky’s eight-channel DSP-based AMC system provides control over levels, balance, mute, selection of house curves, and various other settings and will support configurations up to 7.1. Any input can be routed to any output, and multiple inputs can be mixed and routed to any outputs. Each channel features 1/3 octave EQ, eight bands of parametric EQ and filters, and variable delay for time alignment. Other features include eight system presets (EQ curves, etc.), lip-sync delay, 7.1 bass management with variable cutoff frequency per channel, and an externally accessible mute input. LFE management comes through a 10-band parametric equalizer. Digital inputs have a built-in sample-rate converter, which can be bypassed in Pure-Digital mode for 48-kHz/96-kHz operation.

According to Chris Fichera, VP, audio, Group One Ltd., which markets Blue Sky speakers, AMC can be configured for up to 16 channels via specially written software that combines two complete systems into a single array, and those configurations, he notes, are already in use for Dolby Atmos monitoring in some broadcast-studio environments. A 5.1+4 configuration for remote-production applications is also available and has been implemented in at least one truck under construction.

“There are still some spacing and positioning issues” for the overhead speakers, he cautions. “But it can be done using our existing [speaker] products. The real question has to do with demand from viewers. Are soundbars going to be enough to jump-start this market for consumers?” 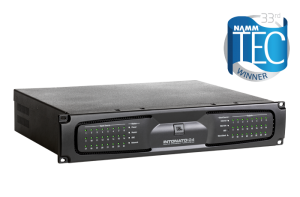 Housed in a 2RU enclosure, JBL’s Intonato 24 Monitor Management Tuning System calibrates and controls up to 24 speakers configured as stereo, surround, or immersive audio systems. Although it’s intended to be used with JBL’s 7 Series Master Reference Monitors, Intonato 24 is also is compatible with other monitors; additionally, Harman’s BLUlink network protocol allows Intonato 24 to be digitally networked with Crown power amplifiers. It features internal routing and a mixer to provide monitoring flexibility for combination of up to 24 analog and digital sources, which can be patched, routed, and selectively monitored via any of the connected speaker or headphone systems. Up to four subwoofers can be assigned as bass-management subs with selectable crossover settings, and the same or different subwoofers can be used to reproduce the LFE channel. Complete configurations —speaker setup parameters, EQ, subwoofer settings, input-source patching, downmix preferences — can be stored as profiles and scenes and instantly recalled, even mid-session.

“The room really doesn’t create problems for monitors above 500 Hz,” asserts Chaikin, noting that Intonato 24 was deployed by NBC Sports for its 2018 PyeongChang Olympics coverage. “Low frequencies are where the room tends to be in control. If you can solve the low-frequency–management issues, then you’ve resolved most of your room-correction problems. That’s what Intonato 24 does.” 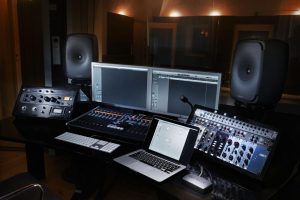 The Genelec Loudspeaker Manager (GLM) software manages connectivity to up to 30 Genelec SAM studio monitors and subwoofers on the Genelec network. The complete GLM control system comprises a Genelec measurement microphone and universal microphone holder, a network adapter unit, and the GLM software. Available for both Windows and Mac, the GLM software features level adjustment, distance delays, and flexible room-response compensation equalization using Genelec’s proprietary AutoCal automated calibration system. All parameters and settings are stored in system-setup files or are saved in each individual studio monitor or subwoofer in case the GLM network needs to be disconnected.

Another class of monitoring-environment–management products has cropped up very recently, adding headphones to the mix. SR Reference 4 from Sonarworks, which has been aggressive in this new category, puts sound-calibration software and a measurement microphone into a package that can establish seamless level transitions between different brands of speakers and headphones. Headphone calibration is done using a premeasured profile produced in Sonarworks’ facility in Latvia: users simply select their make and model — the company has encoded more than 150 models so far — and the calibration profile is set. Speaker calibration is done by the user with the Sonarworks microphone and measurement software, which captures sound from 37 data-source points and follows a similar process as most other speaker-calibration products.

What’s different here is that Sonarworks SR is designed to align transducers with a common audio reference parameter that the company has developed, with patented — and proprietary — sound-measurement technology and DSP. In a broadcast industry that historically looks to organizations like AES, SMPTE, and ISO to establish absolute standards, that could be a point of contention. Sonarworks President Martin Popelis said in a statement that the company is “seeking ways to expand it to be a universal standard for audio producers.”

As surround sound has become ubiquitous, and immersive sound grows ever closer to becoming a broadcast standard, digital technology is remaking what the speaker is, what it does, how it does it, and where it can do it. In a soon-to-be world of 5.1+4, it’s perhaps not a moment too soon.