Premiering at the 2017 Austin Film Festival where it won Best Narrative Short, Demon tells the story of a desperate man emerging from the night where he encounters a solitary shack in the middle of the desert. It is in this night setting where he discovers a dark secret that the property owner possesses. The supernatural drama/thriller, directed by Caleb Slain, was shot by cinematographer Drew Dawson with the VariCam 35 camera just outside Joshua Tree National Park. 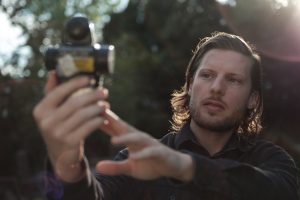 The Demon script had the setting as a desert landscape with a full moon. According to Dawson, the goal was to capture the entire film with moonlight, practicals, and minimal film lights. One of Slain and Dawson’s biggest influences for the look of Demon was the Dogme 95 filmmaking movement from the ‘90s. Created by Danish filmmakers Lars von Trier and Thomas Vinterberg, Dogme 95 was a collective where filmmakers would take a “vow of chastity” by rejecting visual effects, post modifications, or technical gimmicks. Dawson found a happy medium between Dogme 95 while still using professional production tools. “Every choice in the cinematography needs to adhere to the story and the characters,” explains Dawson. “It was a great experience for me because I learned so much about story and working with actors. I think it was just a working style that we knew was adhering well to the way we wanted to tell a story. It was just reverse engineering everything to approach a project.”

Dawson and Slain tested many cameras, including the Sony A7S and A7SII, before selecting the VariCam 35, which they rented out of Panavision Hollywood. During prep, Dawson did a bracketed exposure test at different ISOs to see how far he could push the image. He also took the camera out to Joshua Tree to shoot a moonlight test. “I sent the footage to Chad and he took our 12-bit 444 V-Log files and graded them in Da Vinci Resolve and sent me ProRes HQ files back,” explains Dawson. “I screened the footage on my D.I.T.’s cart and was able to figure out what settings yielded the best image, including the signal-to-noise ratio, grain structure, where was the color landing, and how Chad could massage it,” reveals Dawson. “We decided not to go with native 5000 ISO, but instead setting the camera to 5000 base and dialing down to 3200. We found that was the sweet spot for our lighting environment. Chad de-noised a little bit, but only the chroma, not the luma noise. The result is a more textured image while removing some of the dancing color snow. We left a little of that texture because we wanted to embrace a rougher image – more gritty. It was very much like film grain structure in the end, which Caleb and I both like. The VariCam can really handle these extreme lighting situations, so Chad had a good digital negative to work from.”

For the shoot, Dawson captured AVC Intra 4K DCI (4096×2160) in 23.98 and finished the film in the 2:1 aspect ratio. “I had been playing with the idea in creating a viewing LUT,” explains Dawson, “and I was using the low-contrast curve at first, but a lot of time, I was monitoring in V-LOG because of the extreme nature of the exposure. I wanted to make sure we weren’t clipping the flames and bright headlights, but also getting enough exposure in the tow for all the shadows of the scene. After a couple of set-ups, I viewed V-LOG for the rest of the shoot. That way I could monitor the waveform and know that we had a healthy digital negative to work from later.”

For lenses, Dawson used Panavision Ultra Speed Z T1.3 lenses. He typically set the T-stop one line closed to wide open to try and pull out chromatic aberrations and some of the softness rather than shooting fully wide open. “They’re an interesting set because the Ultra Speed Z’s were the only collaboration between Zeiss and Panavision,” explains Dawson. “They were made in the ‘80s and they have some characteristics of Zeiss lenses, but also characteristics of Panavision so they’re a really interesting hybrid.”

For lighting the interior of the cabin, Dawson wanted to motivate light from above so wherever the camera was, he would retain some detail on faces. He used a single LITEGEAR LiteMat1 with ¼ CTS wrapped in bleached muslin with a lighting control grid, as well as two LITEGEAR LiteStix in the ceiling. “LiteStix are these single pixel enclosures of Lite Ribbon. I had two six inch bi-color sticks, and a one foot bi-color stick,” says Dawson. “We dialed them down to almost the lowest input they could give us.” 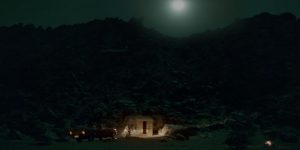 For an ambitious Steadicam shot where the character walks out of the cabin and into the desert night exterior towards a truck, Dawson lit the entire sequence with a six-inch LiteStick that he placed in the interior of the truck’s dome light, as well as practical light coming from a handheld lantern, fire pit, headlights, and the moon. “We could have simply turned the dome light on,” reveals Dawson, “but I decided since we had an extra stick, why not use it? The beautiful thing about LiteStix is that they’re so small. It’s hard to notice, but that stick is in the shot. When the car drives away, it reveals the great desert expanse. We were able to shoot a deep night time desert scene with a great amount of detail. These are images that we’ve never seen before in a movie.”

Demon was finished in 2.8K so they could do post zooms and re-frames. For Slain, if he saw something special in a performance, but maybe the camera was too wide, they were able to push in 10 or 15% to get the exact framing he wanted.

“The main attribute that I love about VariCam is the richness of the color and the ability to grade the image,” concludes Dawson. “The camera has a really unique sensor, and for me, that opens up creative avenues. For this project, it was the only camera that I could shoot and light with.”