Ben Manges has been working with the PR and media arm of the Detroit Lions since 2002; though back then, like most NFL teams, media production was a bare-bones crew of a few camera operators. Now Senior Director of Corporate Communications and New Media, Manges has witnessed an evolution in video production across NFL teams, moving from minimal staff who captured press conferences and occasional practice footage to multiple specialized content teams. 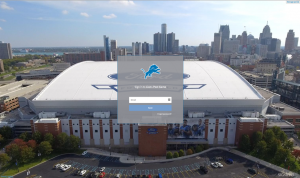 For the Lions, a central aspect of that evolution has been their use of Signiant Media Shuttle, a uniquely simple yet powerful SaaS solution that enables the fast transfer of media files to broadcasters across the state while meeting the NFL’s high media security protocols. The Lions have been using Media Shuttle since 2013, and in many ways are ahead of the curve.

“The NFL has been actively making sure that teams are in compliance with their file transfer security protocols; teams are highly discouraged by the league from using Dropbox, which a lot of people use,” says Manges. “Media Shuttle allows us to quickly, easily, and securely make video files available to news outlets and partners and still be in compliance with NFL security protocols. It’s a reliable platform that we’ve used for several years, and something our media partners throughout the state are really comfortable with.”

In 2017, the Lions’ initiated a plan to further expand their video production staff to better serve the team’s internal and external media needs. Part of that transition was Manges’ appointment to his current role overseeing all content teams including editorial, social media, and video production, and managing relationships with broadcast partners and other TV affiliates throughout the state.

One of the first priorities when Manges started his new role was to make sure everyone was familiar with and actively using Media Shuttle. Many of their broadcast partners are located hours away and do not have the resources to travel to Allen Park, where the Lions practice facility is located, to capture footage. From a public relations perspective, the ability to provide them with resources to accurately tell the Detroit Lions’ story is vital.

“Establishing a rapport and building relationships with our TV affiliates and TV networks throughout Michigan is central to my role, and receiving content from us is first and foremost what they care about,” says Manges. “Media Shuttle gives us a platform to easily distribute video content and take our story to viewers who are interested in what the Lions are doing.”

Media Shuttle: Powerful Software that Keeps things Simple and Fast
Moving large video files quickly and securely over the Internet to multiple locations requires sophisticated software with smart acceleration technology and layers of security. But that’s only the core technology. Professional media file transfer software also: keeps files organized, tracked and visible to managers; allows for multiple users, permissions, and languages; and enables different types of workflows that involve collaborating with an unlimited number of people and organizations, both internal and external. Software that does all of that can get complicated. That’s where Media Shuttle really shines for Manges and his team — in its simplicity.

“Media Shuttle has been so successful for us because it’s such a user-friendly service,” says Manges. “A lot of other media file delivery services overcomplicate things. Media Shuttle makes something that should be easy, easy.”

Media Shuttle brings advanced capabilities often used in large-scale production to businesses of all sizes. As a cloud-native SaaS solution, Media Shuttle has the ability to scale to business needs and budgets, and its simple UI was designed to provide the best user experience for all parties, whether end users, IT administrators, or media operations. And of course, it’s fast.

“More than anything, we appreciate that Media Shuttle is not only easy but it’s also super fast,” says Manges. “With the NFL, things are constantly moving and the fact that we are able to make this content available quickly without much effort makes everything that much easier.”

As the Lions look to the next season and beyond, they plan on creating and producing even more content for fans and further leveraging their Media Shuttle subscription for content distribution. They will be adding more users and more partners, and producing more content under tighter timelines. However, no matter how complicated the Lions’ media workflow gets, Media Shuttle will keep things fast and simple.