JVC Professional Video announced Raycom Media, one of the largest privately owned media companies in the United States, has more than 260 GY-HM660 ProHD mobile news cameras in use throughout its local news operations. With built-in IP capabilities, the cameras have improved workflow efficiencies for multimedia journalists (MMJs) in the field. 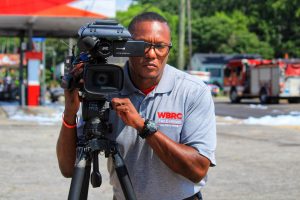 Vincent Parker of WBRC in Birmingham, Ala., is one of hundreds of Raycom Media photographers
and MMJs using the JVC GY-HM660 ProHD mobile news camera for ENG in the field.

“The GY-HM660 is a one-size-fits-all option for Raycom Media,” explains Clint Moore, corporate news operations manager for Raycom Media. “For us, the GY-HM660 is not just about streaming live ENG reports. The vast majority of our stations use the camera to send raw clips back to the station via FTP.”

Rather than wait for an MMJ to return to the station, in-house personnel can access files sent from a JVC camera immediately and edit them for broadcast or online use. Not every Raycom station has the decoders needed to use the GY-HM660s for live ENG reports from the field, but all stations use the Bitcentral Oasis asset management system as a landing platform for raw content.

Between JVC cameras, satellite trucks, microwave trucks, and backpacks, Raycom employs multiple technologies for reporters to go live. For Raycom stations that use the GY-HM660 for live news-over-IP, the results have been very positive. “Field reporters love it because it doesn’t slow them down,” says Moore. “A lot of our stations are very aggressive with using their JVC cameras for live ENG reports.”

Beyond the live ENG and FTP capabilities, Moore said the company’s JVC cameras have been dependable in the field. “We get a lot of good, positive feedback from everybody. As someone who had to use proprietary recording formats in the past, I think recording to dual SD cards is great,” he adds. “That kind of workflow has really proven its worth.”

Headquartered in Montgomery, Ala., Raycom owns and/or provides services for 65 television stations in 44 markets across 20 states, with about 40 of those stations producing local news. The company has been relying on JVC cameras for local ENG since 2013.