The Big South Conference announced the new Big South Network Studio as part of a recent eight-month renovation and expansion of the league’s headquarters office in Charlotte, N.C. The studio provides new video content opportunities for the conference and its membership, as well as eventual live show capabilities that are part of enhanced efforts to showcase the league’s student-athletes and athletics programs. 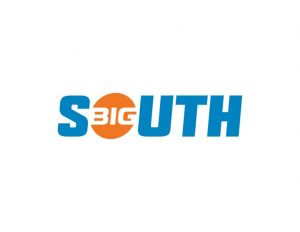 Future efforts will focus on special guest analysis, halftime segments for Big South Network productions on ESPN+, Player of the Week and postseason award announcements, sport-by-sport notebooks, and live studio programs — including pregame shows as well as Football and Basketball Media Day, among others.

“The development of the Big South Network studio is part of a long-range vision to present the Conference, its members, and student-athletes in the most creative and progressive manner possible,” states Big South Commissioner Kyle Kallander. “As they say, ‘Content is King’, and with this studio the Big South will be able to maximize the distribution of our compelling content through programming in our new partnership with ESPN, and on digital and social media platforms.”

“The Big South had special needs in regards to studio space restrictions, sensitive design and production timelines, and budget concerns,” adds Artes Art Director Chuck Whited. “We were able to meet all of these, including a few last-minute additions, to achieve a fantastic large look in a small studio space.”