The inaugural season of the NBA 2K League comes to a close this weekend, with Heat Check Gaming and Knicks Gaming meeting in the Finals. The best-of-three series will close out the first chapter in what has been the most ambitious esports effort by a major U.S. sports league. To stream the entire 15-week regular season plus Playoffs and Finals on Twitch, the league launched its NBA 2K League Studio in Long Island City, NY, in May and has continued to evolve its production style and workflows on a week-to-week basis. 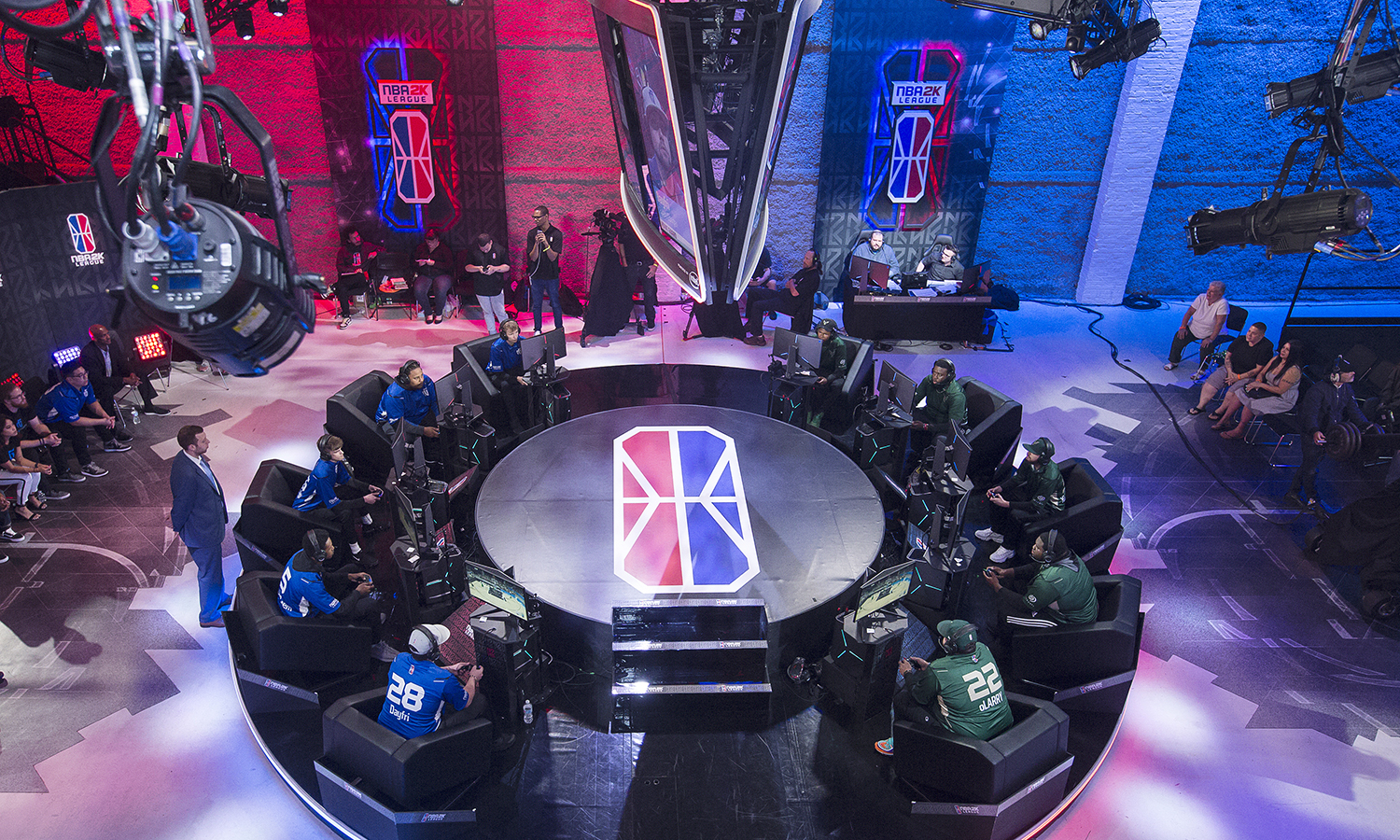 “If you watch our first broadcast and you watch now, they don’t even resemble each other,” says NBA 2K League Managing Director Brendan Donohue. “We’ve added more camera angles and microphones during the season, and we’re going to continue to evolve with a few different things next season. Whenever we talk to people who come to the studio to watch, it’s electric, and there’s so much passion and energy from the players. We’re trying to figure out how can we get closer to reenacting that through the broadcast. And so, every single week, we’re making adjustments trying to make it better.”

Why Long Island City? Proximity to the Mothership
Prior to the season launch, the NBA 2K League transformed an unassuming warehouse in Long Island City (just across the East River from Manhattan) into a 7,433 sq.-ft. live-production facility featuring a stylish studio/arena area for gameplay. 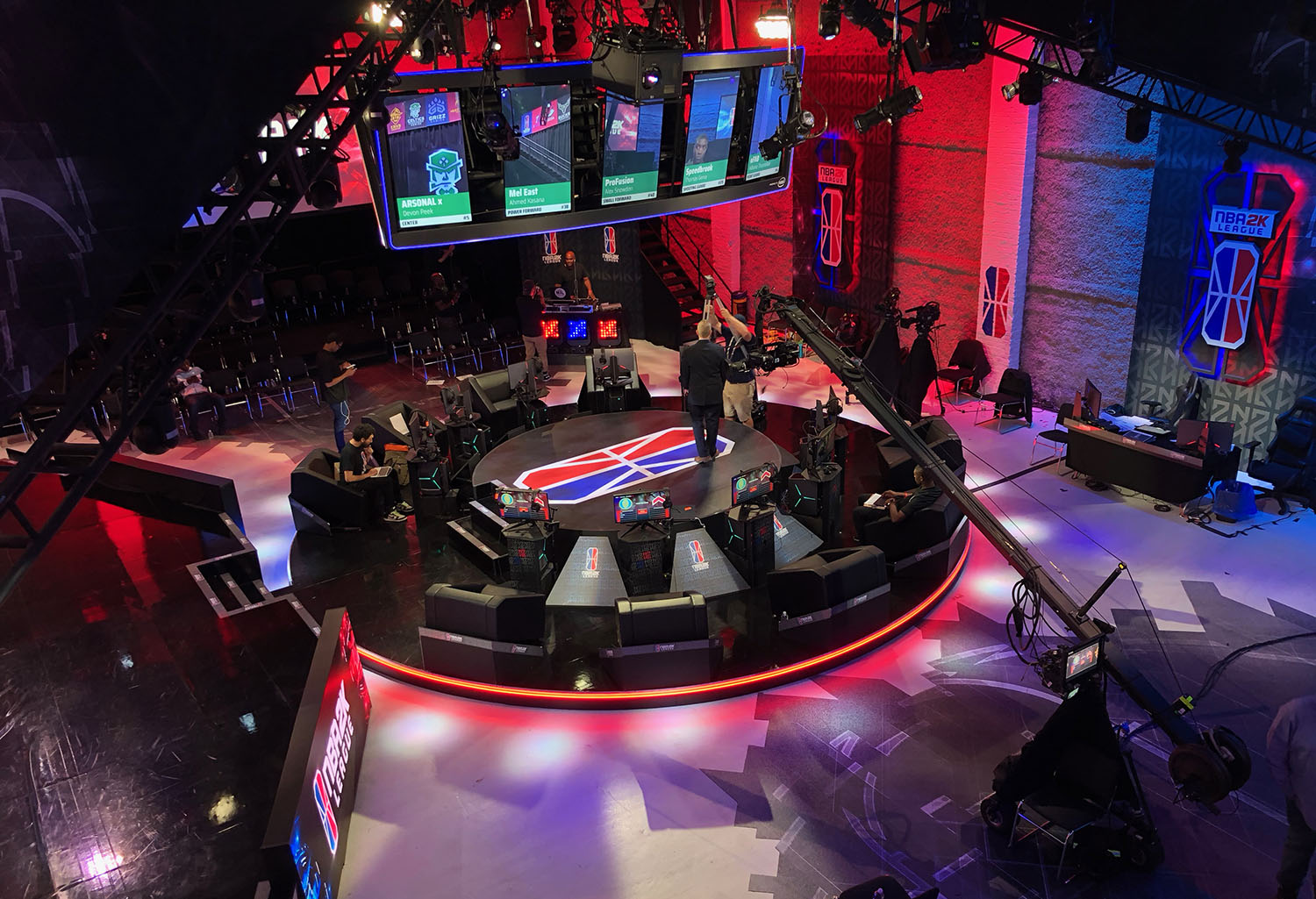 The league evaluated a multitude of locations and design options for what became the NBA 2K League Studio, and Donohue identifies his visit to a fellow esports venue — Blizzard Arena in Burbank, CA — as a turning point.

“When we first were looking for a studio, we looked all over the country,” says Donohue. “But, when Overwatch League kicked off their season and we saw the production and the number of employees that were involved, we realized the benefit and resources they had in being so close to the Blizzard campus [in Irvine, CA]. Making sure we could tap into [the NBA’s] resources was a big driver of why we ended up here. We are only two subway stops away from NBA’s New York office, and we also have 2K Interactive here helping us as well.”

The Long Island City facility features a full studio/arena for the NBA 2K League competitions, as well as workspace for the broadcast-production and highlights/postproduction teams, interview and media rooms, four team training rooms, a green room for players, and a dressing room for talent.

Inside the Studio: Creating a New Kind of Game-Day Experience
The main studio/arena is built around a circular main gameplay area, with the five-player teams facing each other. The PC gaming systems use Dell Alienware hardware and monitors and Intel’s gaming processors. 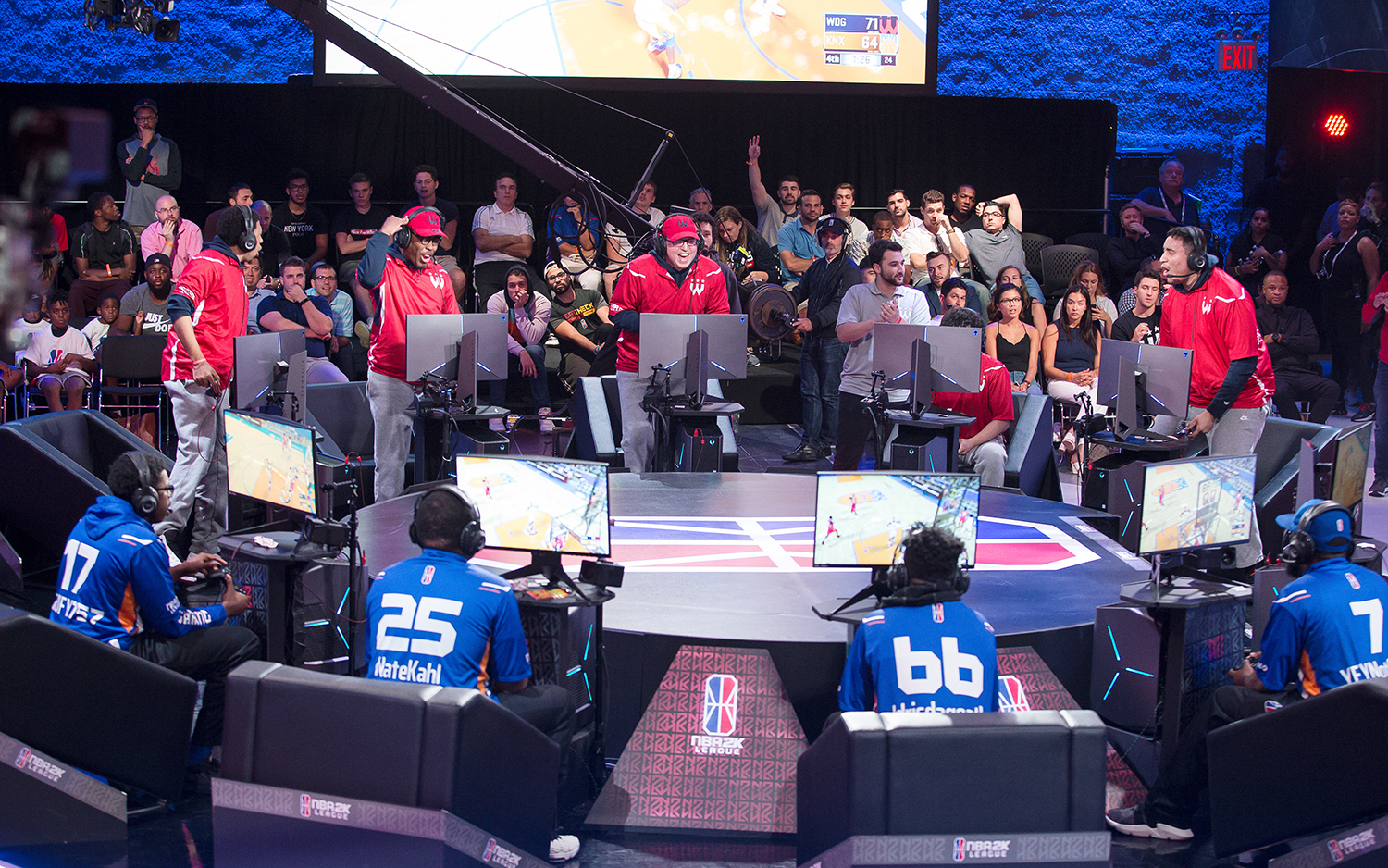 Since multiple games take place each night, the NBA 2K League Studio crew must quickly turnover all 10 gameplay stations in a matter of minutes. Copyright 2018 NBAE (Photo by Michelle Farsi/NBAE via Getty Images)

Several games are played each night of competition, forcing the NBA 2K League Studio crew to take on the mentality of a NASCAR pit crew, switching over all 10 systems in a matter of minutes between games (the average turnover time has been cut from 15 minutes to seven this season, according to Donohue).

“We are uniquely positioned as an esport in that our players can face each other during competition,” he says. “So we were able to create this very engaging circle that allows players to engage, talk a little trash, and really mix it up. That’s created a level of energy that was actually big surprise for us.” 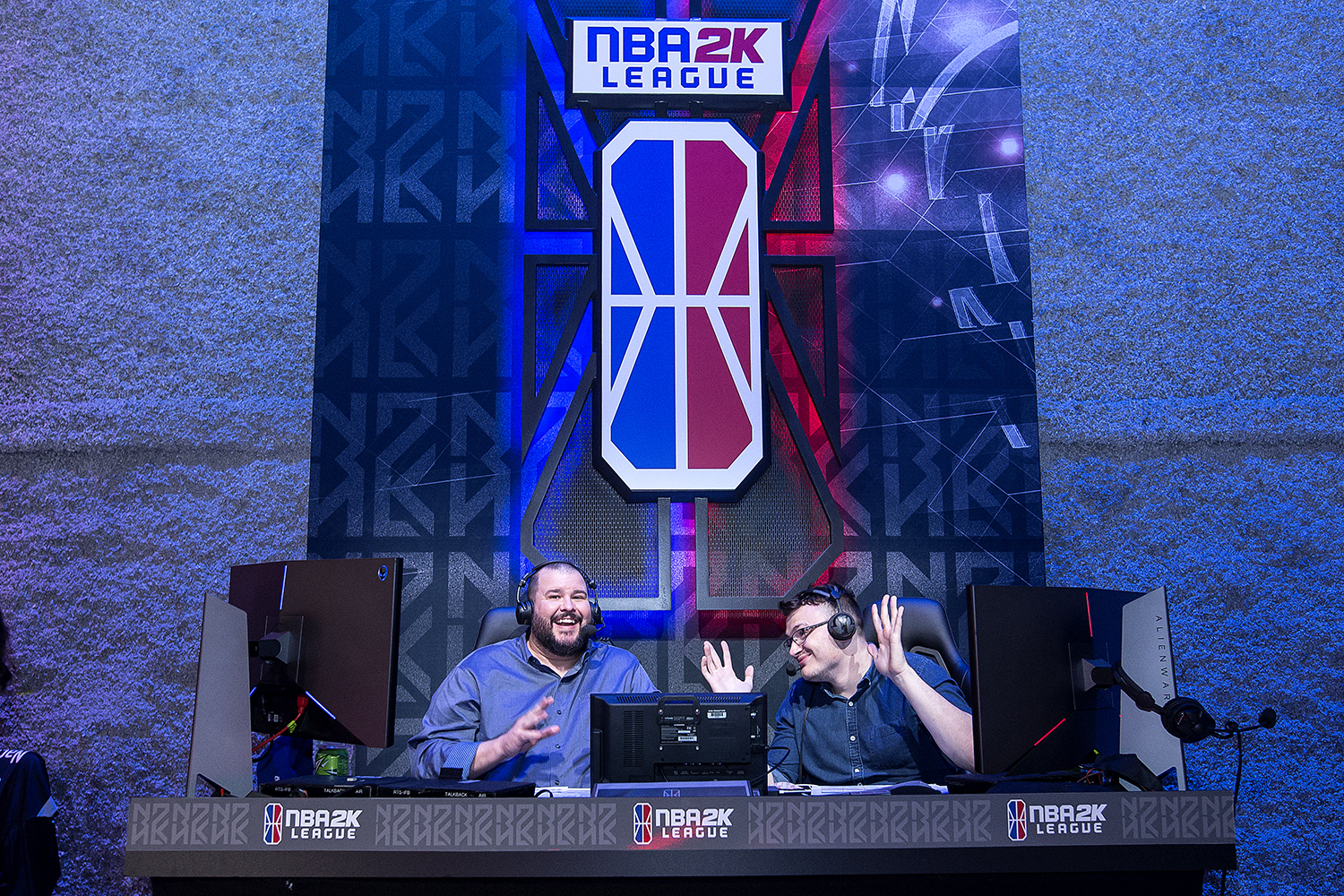 Also inside the studio are a commentator set for the play-by-play announcer and analyst, an elevated set for the pre/postgame and halftime host, a large stairway and stage that function as the “walkout tunnel” for player intros prior to each game, and seating for fans on both the north and south sides of the arena.

A 28- x 13-ft. LED display is located on the player-walkout stage, two 16- x 9-ft. projection screens on the north and south walls for spectators to watch in-game action, and center-hung “player portrait” LED boards are suspended over the gameplay area, displaying all five members of both teams.

The studio is equipped with five Sony HDC-2500 broadcast cameras, a roving Steadicam, a jib, a roving handheld to cover the action inside the arena, and a single camera for the host set and commentator set. In addition, all 10 players are covered by AJA RovoCam POVs.

Inside the Control Room: Production Style, Mentality Evolve Week to Week
The League also partnered with Defacto Entertainment and Media XP to produce the live in-venue and streaming experiences. In addition, Dome Productions has provided all technical facilities and crewing for the NBA 2K League Studio shows. 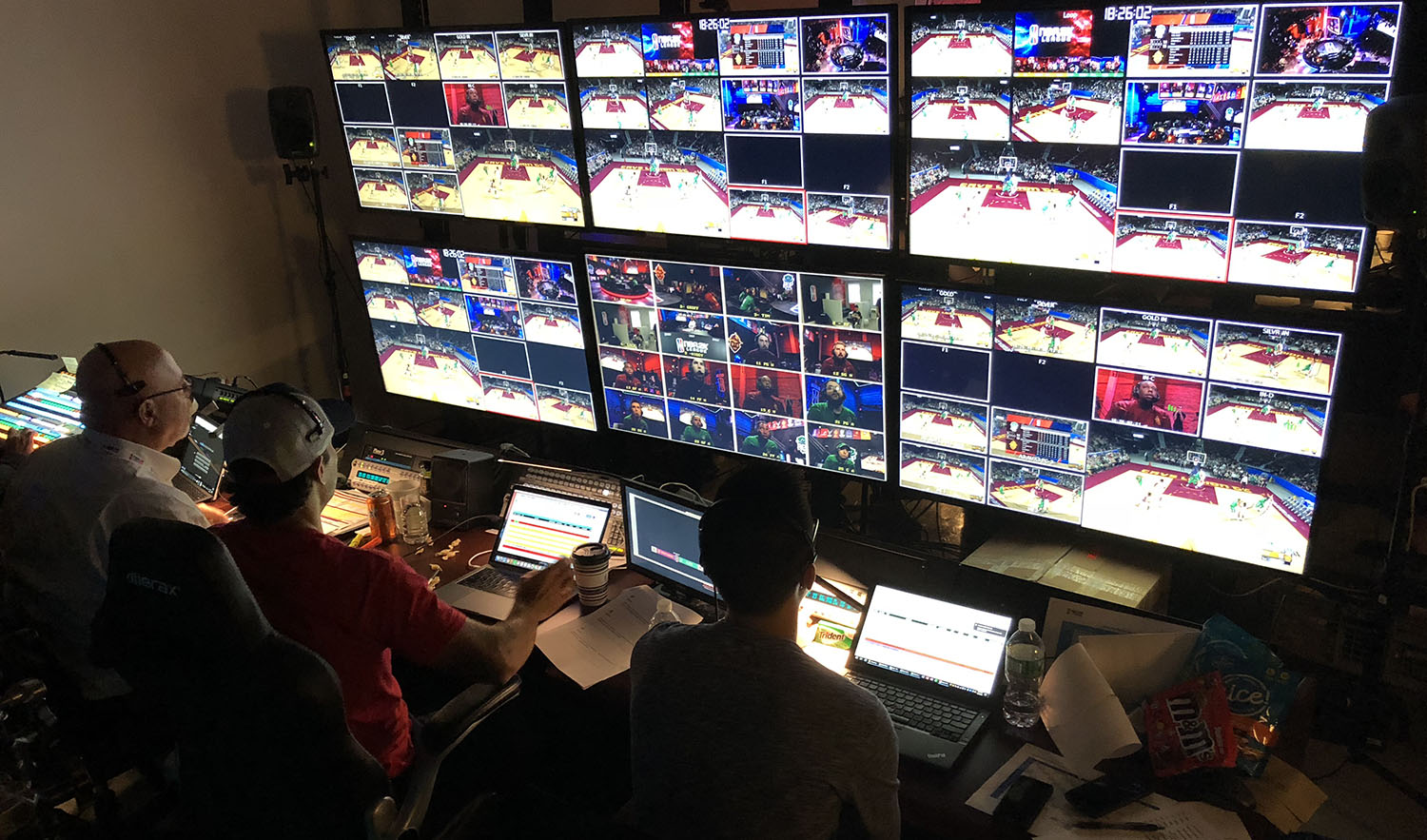 Each NBA 2K League broadcast is produced out of control room area on-site.

Each broadcast is produced out of an area similar to a control room. Located behind the main studio, it features a front bench for the director/producer; workstations for the TD and the graphics and EVS operators; and a monitor wall featuring six 55-in. displays. In addition to providing the F55 cameras in the studio, Dome Productions built out the control room with a Ross Carbonite Black switcher (with a 2M/E panel), EVS XT3 6-channel replay system, a Calrec Brio audio console, Ross Xpression graphics, and four AJA KiPro Ultra Plus recorders.

“We built out a plan to maximize the quality of the production as much as possible,” says Chris Mitchell, Senior Account Manager – Client Solutions, Dome Productions. “So we brought in [high-end tools] like Sony F55 cameras, EVS replay, and Ross Carbonite switcher and Xpression graphics. Once everything was setup and running, people were telling us it felt like Dome Productions brought a gun to a knife fight. We really tried to knock it out of the park because we knew it was their inaugural year, so we wanted to maximize the level of production as much as we could.” 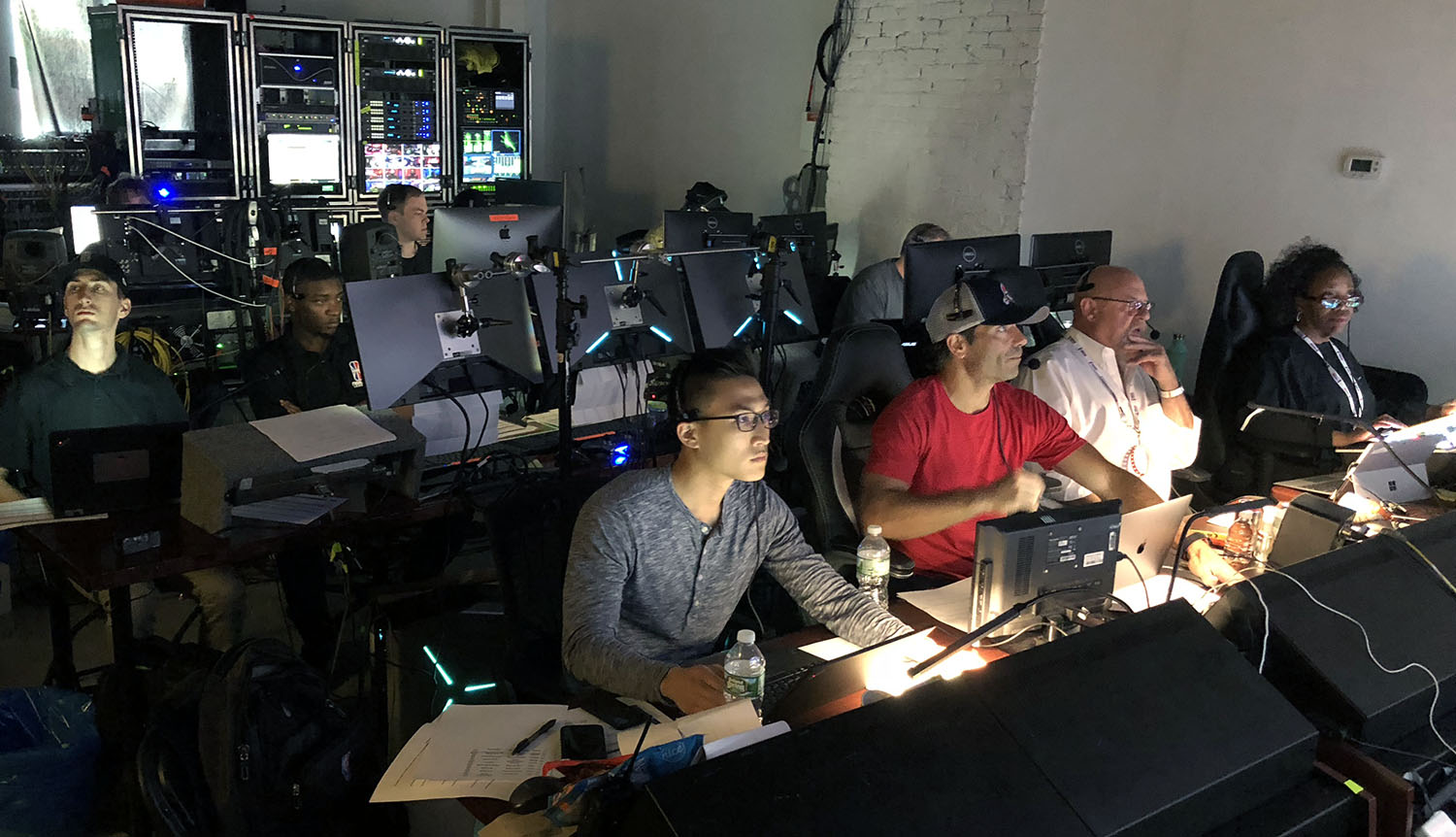 The NBA 2K League control room area features a front bench for the director/producer, as well as workstations for the TD and the graphics and EVS operators.

Offered a greenfield opportunity with the NBA esports format’s entry into the marketplace, the league and the production team took direct feedback from fans watching on Twitch (with a dedicated team monitoring as many as 20,000 comments per three-hour broadcast) and integrated several suggestions into the production. 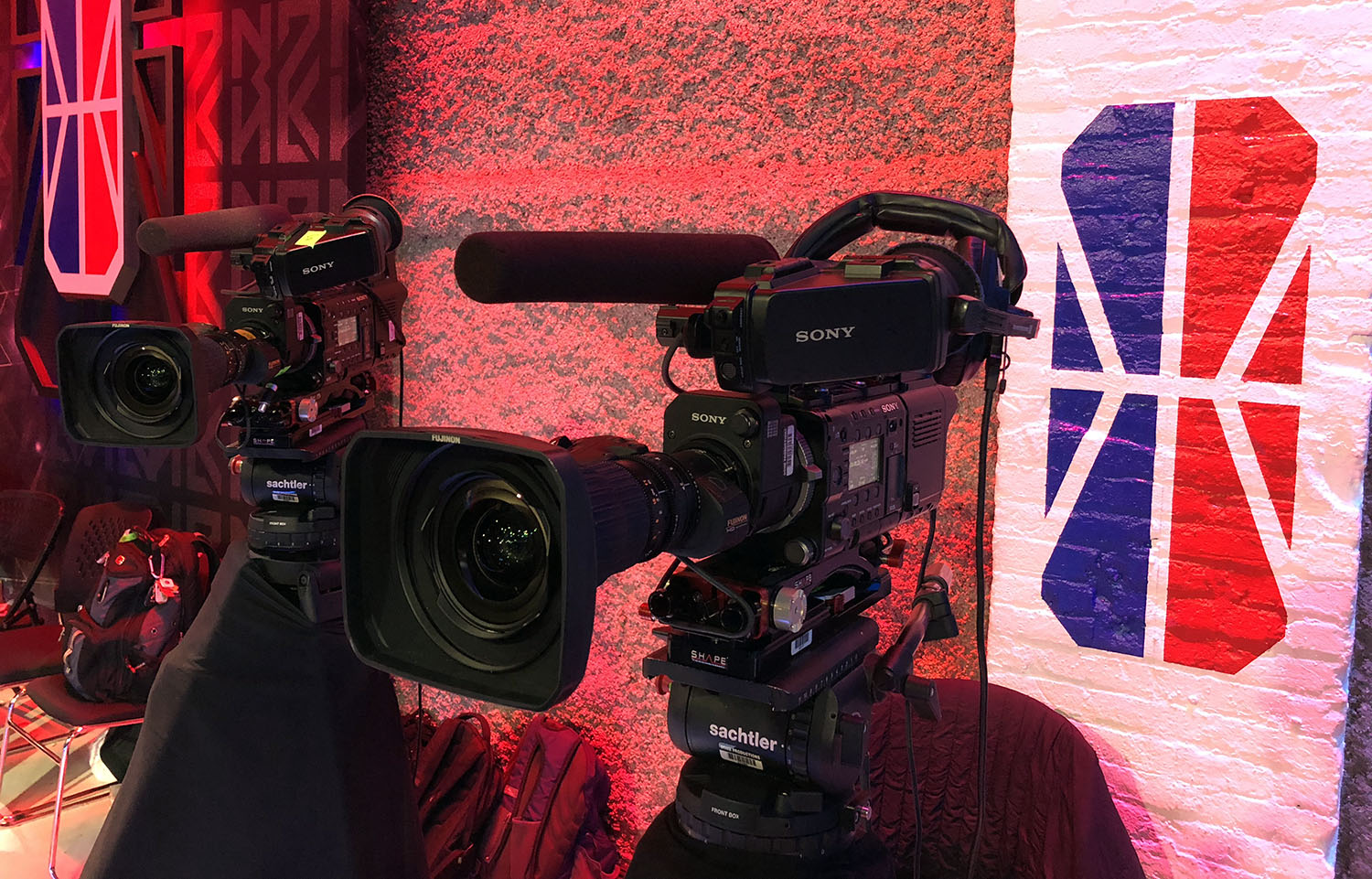 The NBA 2K League studio is equipped with five Sony HDC-2500 broadcast cameras, as well as POV cameras for all 10 players.

For example, fan feedback on Twitch played a major role in the league’s decision to add player POV cameras; player mics, allowing viewers to listen during timeouts (available only in the second quarter); and use of the 2K View (half-court angle behind the point guard) as its primary in-game camera angle rather than Broadcast View (traditional midcourt TV angle). Donohue hopes the league will be able to add a second PC system next season to allow the production team to switch seamlessly between 2K View and Broadcast View during each live-stream.

“We’re getting real-time feedback, so we know if something is working or not within a couple hours of doing it,” Donohue explains. “We’re testing new things every week and making adjustments — sometimes even in midgame. And Twitch has been an amazing partner as well. We talk to them on a weekly basis, and we figure out what can we do differently next week. We’re not making changes season to season; we’re making changes broadcast to broadcast.” 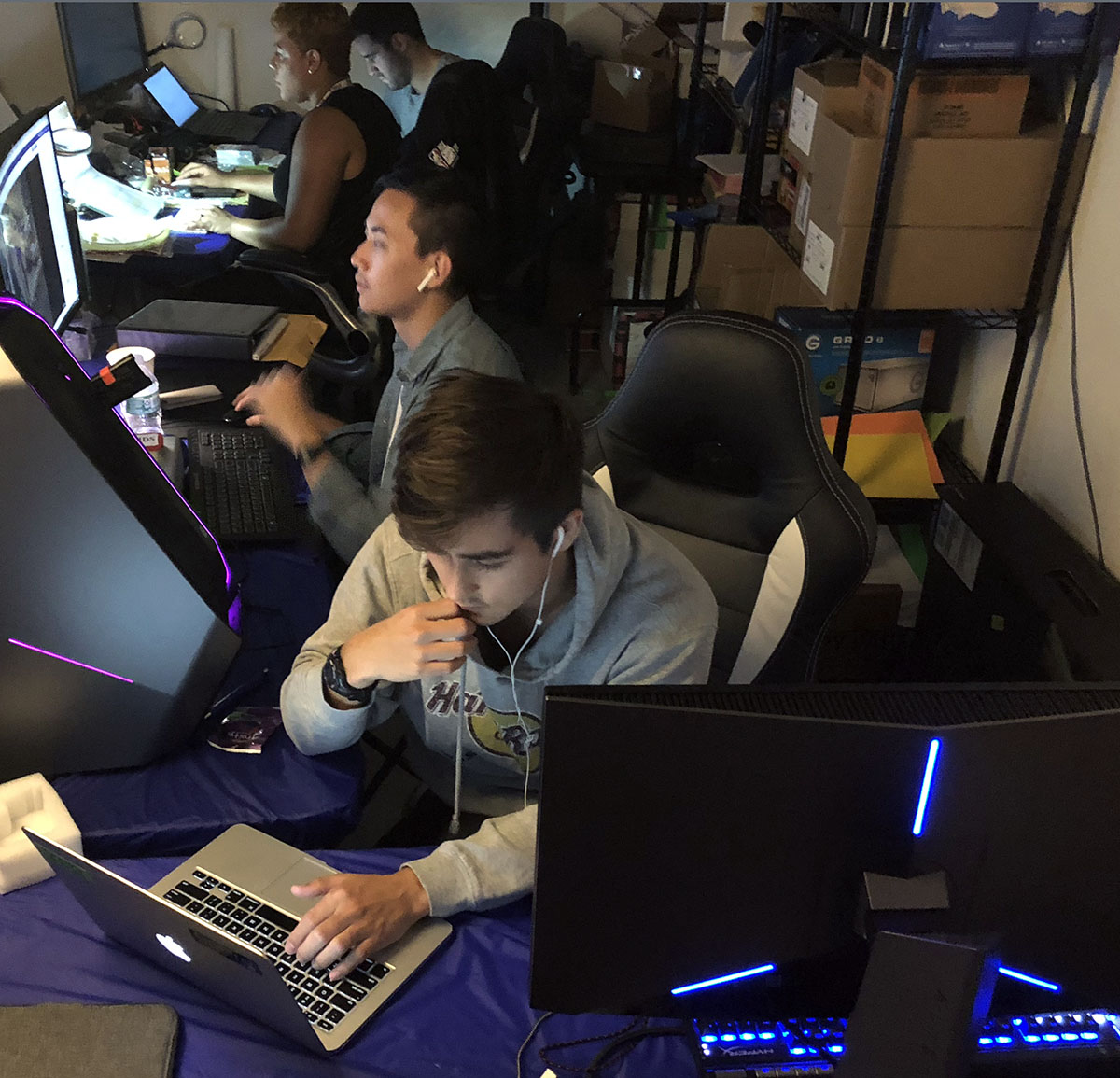 A dedicated team of editors and producers is on hand in Long Island City for NBA 2K League.

Beyond the Live Broadcast: Emphasizing Educational Content
In addition to producing live game broadcasts each weekend, the NBA 2K League has put a focus on creating and distributing ancillary content throughout the week.

A dedicated team of editors and producers is on hand in Long Island City, producing game highlights and recaps, postgame player/coach interviews, and educational content.

“According to Twitch’s data, four out of five of people who watch esports are watching to get better at the game. So we’ve started to layer in more educational content,” says Donohue. “How is this player becoming a great rebounder? When is a three-pointer truly open? We want to help them get better at the game. And so we’ve been loading that in, and then we also do game recaps and things of that nature.”

On the Horizon: What’s on Deck for Season Two
Putting plenty of production firepower behind its first season of broadcasts, NBA 2K League’s efforts appear to be paying off. 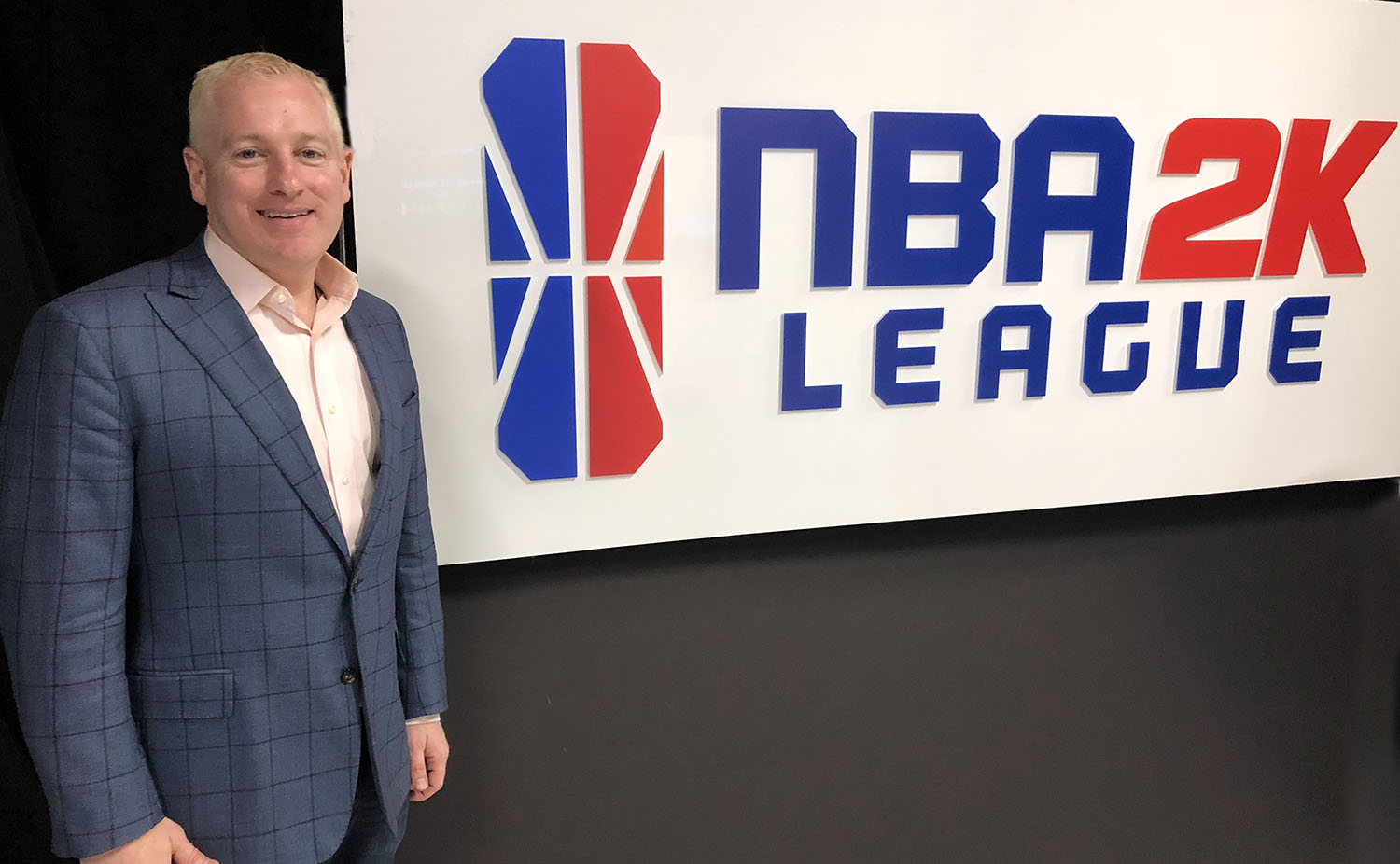 According to the league, recent broadcasts in the final weeks of the regular season and last weekend’s Playoffs have averaged about 300,000 unique viewers — up from 137,168 early in the season. In addition, NBA 2K League content has already generated more than 132 million video views on social-media channels and more than 1.6 million likes and followers across all league and team social-media platforms.

In addition, four more NBA franchises — Atlanta Hawks, Brooklyn Nets, Los Angeles Lakers, and Minnesota Timberwolves — have agreed to join the NBA 2K League for its second season, bringing the total number of teams from 17 to 21. 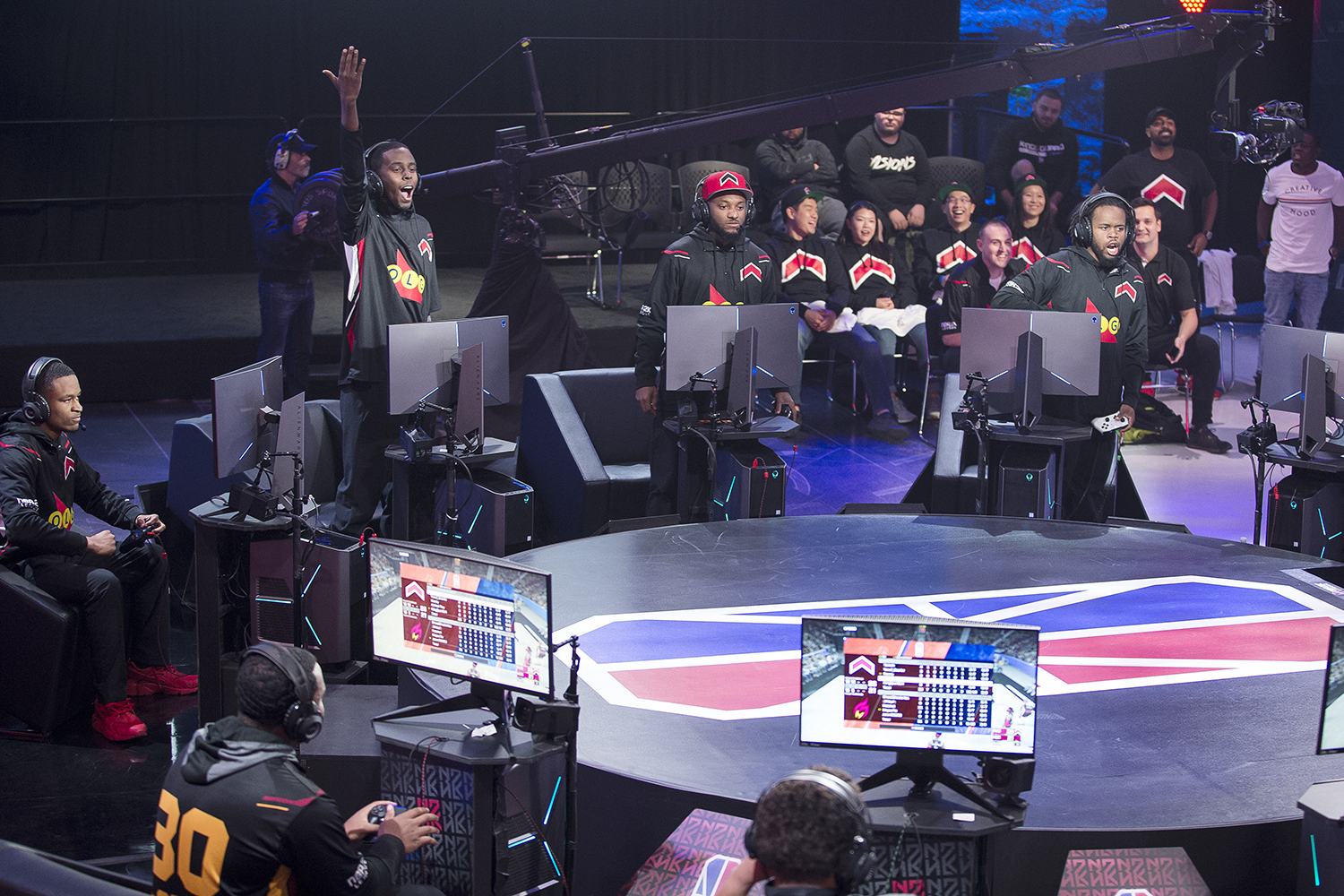 While the NBA 2K League Studio has served the esports entity well, Managing Director Brendan Donohue is intrigued by the concept of taking the show on the road in season two to bring the in-game excitement to more fans.Copyright 2018 NBAE (Photo by Michelle Farsi/NBAE via Getty Images)

With a growing audience and more teams on deck, the question becomes what Donohue and company have in store for NBA 2K League season two.

“We’d love to figure out how we can continue to take the energy level that exists in the studio and translate that to the broadcast — whether that’s more microphones, more cameras, more moving cameras, or continuing to integrate non-game content and storytelling into the broadcast,” says Donohue. “Next season, we would love to create more of a story arc to the entire broadcast.

“I think the other big thing we’re going to look to do is potentially take our show on the road,” he continues. “I could see a [scenario where] we take a week or two of our season and go to another market and let them experience what’s going on here. The players’ energy level has been absolutely amazing, and we want to show more fans just how exciting they are in person.”