As the 2018 edition of the Little League World Series rolls into Championship weekend, the production and operations staff at ESPN look to add another feather in their cap after another year in Williamsport, PA. Although many of the production elements have remained the same from last year, Dennis Cleary, director, remote production operations, and Joe Rainey, senior remote operations specialist, have made some significant changes to the LLWS workflow.

To accommodate media sources coming from all over the globe, Rainey and the ops team switched from Avid to Adobe Premiere as primary editing software. “We have discovered that, on this event, we are mixing a lot of different media from a lot of different sources that come in a lot of different flavors,” he explains. “With all of this on the same timeline, the systems [from Adobe] just seemed to tolerate them better.” 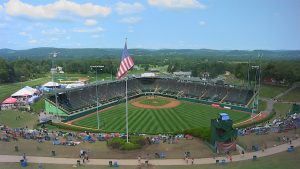 With countless hours of game footage, replays, and other generated content, archiving can become quite cumbersome. With the typical 142 EVS channels, ESPN tapped into a Synology NAS selector to improve accessibility, dependability, and memory space.

“The Synology acts as a giant pool in between the EVS servers and the rest of the archival process,” Rainey says. “It gives the freedom to save more media for longer and have access to it throughout the event.”

In years past, after the conclusion of International play, ESPN has always used the storing capabilities and extra resources from the production unit designated for Volunteer Stadium. This year, however, ESPN released the unit, relying solely on the power of two A units for the remaining games. With the Synology NAS, the crew can offload that content to that platform as a substitute.

Now in its 10th year serving ESPN at the LLWS, Creative Mobile Solutions (CMSI) has a played a key role in these workflows. The company is onsite providing two Adobe Premiere edit systems; five Adobe Premiere producer stations; one 80-TB Avid NEXIS for edit storage; one 96-TB 10-Gb NAS for nearline storage; the Cisco 10-Gb network for edit and EVS workflow; and EVS IPDirectors, XFile3, and XTAccess. In working with CMSI, ESPN has the ability to scale and meet demand through virtualization of EVS software on VMWare, as well as the capability for high-speed file transfer to and from ESPN’s broadcast center in Bristol, CT.

With multiple games and two separate locations, communication is always a bit tricky at LLWS. This year, ESPN has transitioned from an RTS RVON intercom system to a UNITY system to provide more-seamless portability for the crew onsite. 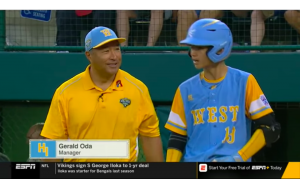 “It offers more channels back to Bristol at a higher quality,” notes Rainey. “The [UNITY] mobile app allows the production staff to go across venues and roam freely around Williamsport with the program in their pocket.”

For wireless communication this year, ESPN has brought in a Clear-Com FreeSpeak II system to handle all RF comms needs.

“That system gives us eight channels interfaced to the trucks and lets the producers roam the entire venue or cross venues without having to change packs or equipment,” says Rainey. “It’s given everyone a lot more seamless communication with a lot more freedom of movement.”

The three mobile units are once again provided by Dome Productions: Pacific at Lamade Stadium, Journey at Volunteer, and B100XPT as the B unit. Camera coverage remains the same, with a combined 38 covering both venues. Major highlights include three Sony HDC-4300’s for super-slow-motion playback, three wired handhelds, one roving RF handheld, seven robos from Fletcher, five Marshall miniature POV cams, and a jib. When Volunteer closes up shop, Lamade gains an additional jib cam — right next to the Casey statue past the left-field wall.

A staple of the Little League World Series is the capturing of the sounds on the field from players, coaches, and umpires. With an extensive arsenal of audio equipment, Cleary and Rainey are personalizing the participants with 72 effects mics, 22 talent mics, 16 RF mics (exclusively for coaches and umpires), and nine VER Hydras. Bexel laid down 50,000 ft. of fiber to make it all possible.

Major Leaguers, Too
As if the tremendous talent of youngsters weren’t enough, the New York Mets and the Philadelphia Phillies also participated in the 2018 Little League Classic. Although the pregame coverage and the telecast were handled by the staff of Sunday Night Baseball, Cleary and his team used TVU Networks IP transmission packs to capture the journey both teams undertook to get to the complex, as well as the fan interactions with big leaguers like Noah Syndergaard and Rhys Hoskins.

Says Cleary, “We did coverage of the [MLB] teams basically from the time that they landed at the airport with TVU packs until they arrived at the Little League stadiums on buses.”

The Annual Return
ESPN has continued to expand and broaden its productions to bring this yearly spectacle to fans at home. Whether adjusting to the unpredictability and unknowns of late-August weather in Pennsylvania or conquering new technological challenges, the crew has remained committed to the essence of the tournament: the fun of baseball. As for Cleary and Rainey, the Little League World Series is one of the events that both men are always eager to return to.

“This is one of the events that the group that’s been working on this for many years always looks forward to coming back to,” Cleary says. “It’s a joy coming back to Williamsport for three weeks every year.”