Klubben i Røverstaden is a new venue in Oslo offering a broad range of concerts and club concepts. With its 750 person capacity, it has an intimate atmosphere, but at the same time caters for major touring acts, both national and international. Earlier this year, it took delivery of the first DiGiCo SD12 system to be installed in a Norwegian club, supplied by DiGiCo’s Norwegian distributor, Scandec. 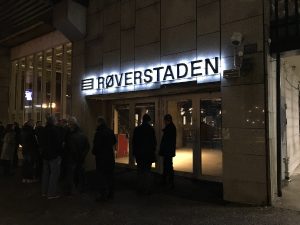 Røverstaden, which directly translated into English means ‘City of Outlaws’, is situated in the basement of a three-story building in the city center, in what used to be the slum of Oslo, an area that was famous for moonshine and brothels and where outlaws ruled. Its proximity to the royal castle prompted the demolition of the entire area, but in the 1960s it became a bohemian hang-out and the building housed Club7, followed by Sardine’s. These were iconic venues and from the mid-60s to the mid-80s, they hosted international artist such Tom Waits, Miles Davis, B.B. King, Chick Corea, Red Hot Chili Peppers, Johnny Thunders, and many more pass through its doors.

The current venue features the latest in technology, with the SD12 plus D2-Rack, DMI Dante and DMI Waves interface cards sitting at the center of its audio system.

“We chose the SD12 because it’s a highly flexible console with premium audio quality,” says Røverstaden technical manager Andres Verde. “It also allows two engineers to work on the console at the same time, while its relatively compact footprint makes it perfect for Røverstaden. The fact that DiGiCo is highly accepted among international artists was also an important factor for us and our own engineers love it, too.”

Anders also notes that the flexibility of the SD12 and its ease of use have added to its appeal for the club.

“I have used most consoles on the market and this one is one of the quickest to learn,” he adds. “And there are so many features and possibilities that we discover new things all the time.”

In the short time since Røverstaden opened its doors, it has seen huge success, with Red Bull Music hosting its first event of 2018 there and Mark Olso, Jacques Green, Ariel Pink and Kida Kudz already gracing its stage. August sees it take part in 2018’s Øyafestivalen, one of Norway’s biggest festivals.

“The SD12 is a really reliable, stable console with an intuitive user interface and flexible system setup,” Andres concludes. “Having such a universally accepted console makes a massive difference to us and means that, whoever walks through our doors, we are confident they are going to have a first-class experience.”