Politics Aside, the National Anthem Poses a Variety of Issues for Broadcasters

It doesn’t matter whether you stand or kneel (or where you stand on taking a knee), the national anthem, an audio element that is part of virtually every sports event, gets its share of nonpolitical abuse, too. There are the truly bad renditions: the one by former Black Eyed Pea Fergie at this year’s NBA All Star Weekend event, described in one tweet as “Amy Winehouse doing a Britney Spears impersonation,” is the most recent, and then there’s what many consider the all-time worst interpretation, by Roseanne Barr at a 1990 San Diego Padres game. Whitney Houston’s version before the 1991 Super Bowl is one of the most well-regarded.

Bill Stanley, who created Stanley Sound in 1987 to supply sports venues with recordings of organ music and sound effects, says he has seen “The Star-Spangled Banner” performed thousands of times, which is to say he has heard it all.

To Sing the Impossible Note

“As a musician,” he says, “it is readily apparent to me when an inexperienced singer commences ‘The Star-Spangled Banner’ in a pitch that’s too high, which usually leads to disaster later on when the tune’s range becomes, well, terrifying. Knowing this impossible note is on the way can immediately distress an amateur and provoke a wobbly performance right away. I’ve heard dozens of singers just go ahead and make an ugly change of keys right in the middle of the song.” 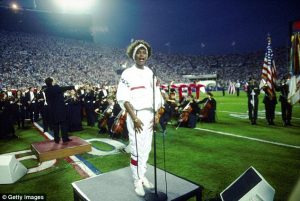 Whitney Houston’s performance at the 1991 Super Bowl is considered one of the best renditions of “The Star-Spangled Banner.”

“The impossible note” is the high fifth occurring on the lyrics “rocket’s red glare,” a full octave and a half from the song’s lowest note. It’s the one that causes most singers to stumble, often because they start the song in too high a key. However, because of the song’s range, many vocalists also find it difficult to project the early stanzas in a key low enough to make the Impossible Note attainable. However, when a singer does hit The Note on pitch and with sufficient volume, it can send a stadium crowd into a frenzy as a reward. (The National Association for Music Education recommends the song be sung in the key of B-flat, with its high-F note accessible to most voices.)

Fergie notwithstanding, the NHL and the NFL tend to choose better vocalists, on average, than baseball, says Stanley: “Until baseball teams engage a more limited field of competent, reliable performers during the regular season, including them in a broadcast would amount to a troubling nightly roll of the dice.”

The earliest documented performance of the national anthem at a baseball game took place on May 15, 1862, during the opening game played at Union Base Ball and Cricket Grounds in Brooklyn. In an era without sound-reinforcement systems, performances were usually by marching bands and orchestras. Once amplified sound came into the picture, vocals became the norm.

Networks and leagues vary on when they include the anthem in broadcasts. It’s rarely included in regular-season game broadcasts; however, it’s often included in the televised portion in event-level games, such as all-star games and postseason play.

But controversy over how some athletes acknowledge the anthem is changing that. On Friday, ESPN announced that the network won’t televise the national anthem during its telecast of Monday Night Football. According to a survey by USA Today, CBS Sports doesn’t plan to show the playing of “The Star-Spangled Banner” as part of its weekly NFL broadcasts, in line with the network’s practice in recent years; Fox Sports will reportedly broadcast the anthem performance only during what it considers to be special-event broadcasts, according to an unnamed source; an NBC Sports spokesperson told the paper that plans for its NFL broadcasts this season are still undetermined.

However, on a practical level, broadcasters often have little to do with it other than just taking the feed from the venue’s audio system.

“We usually just take the stadium feed,” says Dave Grundtvig, who has done A1 work for MLB and NFL broadcasts. “They don’t always use the appropriate microphones, but it’s really all on the singer.”

Some games will use a prerecorded version of the song, to avoid problems. In many cases, even its introduction is prerecorded. More and more often, singers are chosen for their celebrity, and, as with Super Bowl halftime shows, their selection is often linked to new recordings about to drop. But there are also the welcome surprises, like 13-year-old Nayah Damasen, who nailed it at Game 1 of the 2015 NBA, pausing perfectly before The Note, creating theatrical apprehension ahead of the vocal equivalent of making a half-court three-pointer.

Stanley has advice for those who supervise performances of the anthem, strongly recommending at least one run-through before game time, with some basic microphone-handling tips for novices. “Not too close, not too far,” he cautions on proximity to the mic. “Don’t give the [mixer] any surprises that would lead to overmodulation or feedback.