When it comes to high school football, it simply doesn’t get any bigger than Texas. And, with that in mind, Fox Sports Southwest (FSSW) is rolling out “Texas Football Days” across the state this week for the second consecutive season. The week-long gridiron celebration will culminate on Friday when Fox Sports Southwest produces 15 straight hours of Texas high school football coverage, including full-fledged live multicamera productions at two high-profile games and live look-ins at 10 others taking place simultaneously across the state. 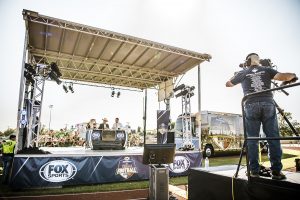 “We’re a huge region that covers six pro teams, and, for us, high school football is our seventh pro team,” says Fox Sports Southwest Executive Producer Jason Walsh. “The passion for the sport in Texas has been hyped in the movies and TV, but, until you see it in person, you don’t fully appreciate it. Our high school championship games even outdraw some college bowl games. So we want to make sure, from a coverage and production standpoint, that we’re doing justice to what we believe is a state treasure intrinsic to the towns and communities of this state. For us, it’s an honor to be a part of something that is such a big part of Texas heritage.”

After a successful inaugural year in 2017, the Texas Football Days production will be centered on full productions out of Mobile TV Group’s 27HDX and 38HDX mobile units in Brownwood (Brock vs. Brownwood at Gordon Wood Stadium at 5:30 p.m. CT) and Longview (Lufkin vs. Longview at Lobo Stadium at 8:30 p.m.), respectively. Each production will deploy a dozen cameras.

FSSW will also produce a one-hour Football Friday pregame show from Brownwood and a two-hour High School Scoreboard Live postgame show from Longview. In all, FSSW will air 15 hours of coverage, beginning at 10:30 a.m. on Friday. 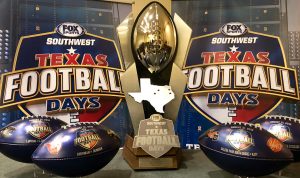 For the first time, teams involved in the marquee doubleheader will be competing to take home a Texas Football Days trophy to commemorate the official start to the 2018 season.

The 12 cameras for each production comprise six hard cameras (two high-speed cameras from 27HDX and four from 38HDX), four handhelds (including two RF — one Steadicam and one handheld), a jib, and a drone.

“We will have a camera complement similar to one of our bigger A-level college football games,” says Walsh. “We invest a lot into these broadcasts because it’s about so much more than the game itself. It’s about capturing the fans and the cheerleaders and the bands and everything that surrounds Texas high school football. We’ve added RF cameras, including a Steadicam, as well as live drone feeds for aerial coverage to make sure that we bring people into what it’s really like to be there.”

Across the State: LiveU Backpacks Go Live From 10 Schools

In addition to rolling out MTVG trucks for the two marquee games, FSSW will deploy 10 LiveU portable IP/bonded-cellular backpack systems to provide live look-ins from 10 other stadiums across the state.

Line cuts from both MTVG truck productions and live feeds from all the LiveU systems will be sent to FSSW’s studios, where Walsh, Senior Director Elsy Watkins, and Coordinating Producer Ed Pete will be in the control room integrating the live telecast. The LiveU feeds will be recorded at the studio by Avid AirSpeed systems, and an associate producer will monitor three games apiece and alert the front bench when a big play occurs worthy of a live look-in.

“When a big play happens, we will tell the reporter to do a live hit, and we’ll B-roll a highlight of the play live on top of that,” says Walsh. “The tricky part for us was how to integrate all these [LiveU feeds] into the broadcast. So we decided to create a reduced-commercial format featuring sponsorship in each break. The game will stop for a commercial break inside the stadium, but we will actually do a content break on-air using our LiveU [systems] and reporters onsite.”

With kickoff times for the live–look-in games staggered throughout the evening, the production team will have the ability to regularly integrate these LiveU feeds into the telecast. 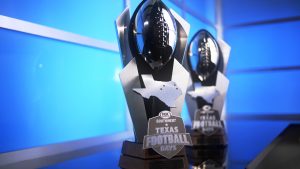 “Our first game starts at 5:30, our second game starts at 8:30, and all the other games start somewhere in between,” says Walsh. “During your first game, the content coming in will be everything from an interview with a coach to locker-room sound to actual game coverage. We will plan out the first three quarters of the first game pretty much in advance. At that point, once we have our legs under us, we’ll be able to see which games are close and which games are blowouts, and then we’ll just start to adjust as needed.”

FSSW used LiveU units for last year’s Texas Football Days production and deploys them regularly for its Texas Rangers coverage and general ENG needs. According to Walsh, the systems have proved highly reliable despite operating in extremely remote areas in East and West Texas. However, aside from having to increase its bandwidth requirements with LiveU for the month of August, the systems have been flawless.

“To be honest, we weren’t sure how this was all going to work last year,” recalls Walsh. “Would it even be possible to pull off 10 feeds, and can you maintain as little latency and delay as possible? Going out to the middle of West Texas or East Texas, you’re not sitting in major cities. And we expect to have the same success this year.”

A Full Week of Lone-Star Football
Of course, FSSW’s Texas Football Days festivities go beyond just Saturday. The week kicked off with the debut of Texas High School Football Season Preview on Sunday, and FSSW is presenting programming focused on Texas football throughout the week, complete with replays of classic high school and collegiate games including last season’s UIL 5A Division I Championship battle between Highland Park and Manvel. In addition, the Texas Football Days Bus Tour (presented by Jack in the Box) is visiting high schools throughout the state all week. And, finally, on Saturday, with the start of college football season, games on Fox networks will show features recapping the Friday-night high school celebration.

“We have more than 200 people working on this in some way, shape, or form — from sales to marketing to production and everything in between,” says Walsh. “It’s all-hands-on-deck, and it’s something we’re really proud of.”