1. How did you get your start in audio mixing? 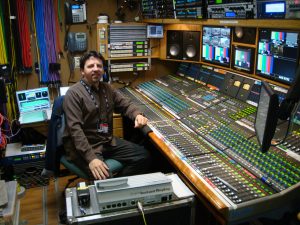 My journey into audio was more organic in that my knowledge and expertise was initially derived solely from first-hand experience. I decided early on that college was not the right path for me, and so I got a job at a plastics factory working the graveyard shift. A few days before I was supposed to start, I had plans to meet my friends at a concert about 90 minutes away. My car had broken down, so I decided to hitchhike. I got picked up by the bass player and when we arrived at the venue he asked me if I needed a job. It sounded better than the factory, so I went for it. I remember going around with a pad of paper and tracing every wire and then asking all these questions. For the next few years I worked my way up the ladder working for bands, sound & lighting companies and promoters. Through this I learned systems, lighting and ultimately sound. My roommate was a sound mixer, so he initially taught me to mix.

2. Please tell me about your background and your career, including notable and favorite projects or any awards you have won for your work. What’s the biggest audio project you have worked on in your career?

After working in the industry for a few years, I decided to go back to school. Back then there were very few programs that focused on audio and/or music. I really wanted an engineering degree and finally found Ohio State. One of the professors had his doctorate in electrical engineering, was an audiophile, a jazz musician and his best friend had a commercial recording studio. He hand-tailored a small group of us and I graduated with a BSEE degree in Electrical and Acoustical Engineering.

I continued to work concerts through school and when I graduated worked my way up to chief engineer of the largest sound and lighting company in the Southeast US. From there I worked for a mobile recording studio doing live albums/CD’s, broadcast mix downs and award shows. My partner in the recording studio was a race car fan and would work car races including Daytona, Sebring, etc. That was where I was introduced to sports broadcasting.

In my music career, I have been very fortunate to mix and work with a wide variety of artists and genres. From the Rolling Stones, U2, and Prince to Johnny Cash, Frank Sinatra, the Royal Philharmonic Orchestra and Whitney Houston, with whom I recorded “I Will Always Love You,” which sold 45 million copies and won two GRAMMYs. Not bad for a last-minute recording that we had to be talked into doing (but that’s another story). I’ve also been awarded a couple platinum albums along the way as well.

In my sports broadcasting career, I have mixed every major sport there is and have travelled all over the world doing it. We took the Fox NFL pregame show to Kabul Afghanistan, which I mixed on a Calrec Zeta. I’ve worked six Olympics (most for NBC), 17 Super Bowls (I think), five World Series, two Stanley Cups, Cricket matches, NASCAR, Indy Car Racing, Goodwill Games in Russia, Great Outdoor Games, X Games, Golf’s U.S. Open, PGA Championships, and 25 consecutive years of MLB and NFL games. During the 2008 Olympics in China, I wrote a book “Beijing Journal: A Live, Day-By-Day Account From Backstage At The 2008 Olympics.” I’ve won 11 Emmy awards and was awarded a Congressional Patriot of the Year Award for my efforts.

It’s impossible for me to pick one show or event that was my favorite or even the biggest. I feel very fortunate to have worked a lot of amazing shows with amazing people. Many were very challenging and difficult but it’s what I love and I have a lifetime of memories to go with it. 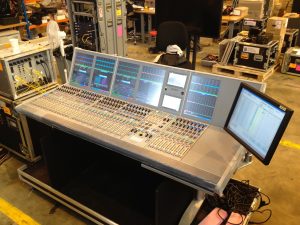 3. How have you seen audio technologies evolve over your career? Where do you see audio mixing heading into the future?

We’ve gone through many major transformations in my career. Of course, the easy answer is mono to stereo to digital and surround and now were embarking on immersive. I’ve had to rein