The Guinness PRO14 will be available to fans across the U.S. beginning this week, exclusively on ESPN+ and the ESPN television networks as part of a multi-year agreement. 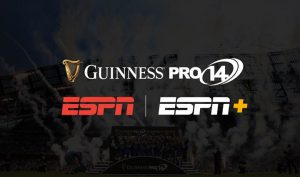 RDA, the international media rights agency, secured the agreement for the Guinness PRO14, which will see every one of the 152 games per season available in the US with over 140 games shown on ESPN+ and 10 showcase games lined up to appear in HD on ESPN networks.

ESPN+ will feature 142 matches per season. Another 10 matches, all between December and May, will appear on ESPN’s linear television networks.

The 24 match-week 2018-19 season stretches from August 31 to the Final on May 25, 2019 in Glasgow’s Celtic Park. Coverage on ESPN+ will begin immediately, with a full slate of matches this weekend.

“ESPN is synonymous with epic sporting moments and this new partnership will be remembered as a significant day in the history of the Guinness PRO14,” says Martin Anayi, CEO of PRO14 Rugby. “We know how popular the Guinness PRO14 is in North America, particularly now with the US Eagles’ duo of Blaine Scully and Samu Manoa playing at Cardiff Blues. Rugby is growing in popularity all of the time in the US and we know rugby fans there are just as eager to see our games as supporters in Ireland, Wales, Italy, South Africa, and Scotland.

“We are thrilled to know that so many games will be available on ESPN+ with some of our best games of the season also screened on ESPN’s linear network. The Guinness PRO14 is one of the most exciting rugby union tournaments in the world which is going from strength to strength and we’re thrilled that American fans will see that for themselves.”

“The Guinness PRO14 is one of the pillars of professional rugby, with some of the world’s most storied and accomplished clubs,” says Burke Magnus, Executive Vice President, Programming, ESPN. “Adding it to the ESPN+ lineup every week, and introducing it further to viewers on the ESPN networks, is a fantastic development for the existing, passionate rugby fans of the sport in the U.S. and will also help expand the audience for world class rugby.”

“This season we agreed record-breaking TV deals and revamped our domestic broadcast offerings which allows us to provide a product that is appealing to ESPN and so many other major sports broadcasters around the world,” says Dermot Rigley, Commercial & Marketing Director of PRO14 Rugby. ” The Guinness PRO14 sets incredibly high standards on the pitch and we are delighted that we can deliver a world-class viewing experience to rugby fans in the United States through this partnership over the next three years.”

ESPN+ coverage begins Friday, September 7 at 2:35 p.m. ET, with three matches, including defending champions Leinster open their 2018-19 campaign on the road in Cardiff to face the Blues, followed by another four matches on Saturday.